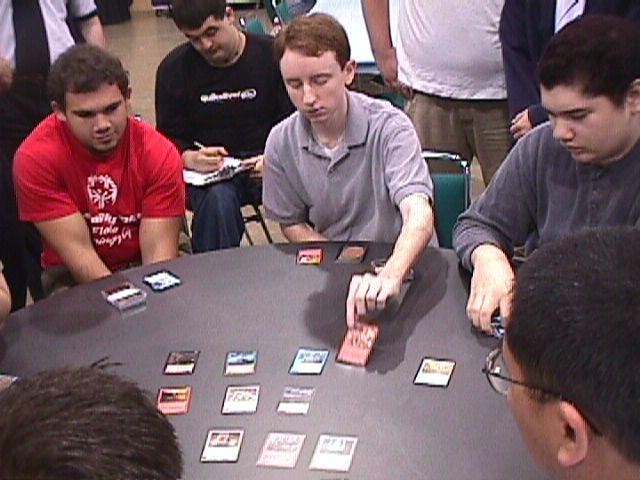 Coming into day two at number 1 seed, 7 wins and no losses, Eugene Harvey was seated in the third seat between John Lagges and Chris Fallon. The draft looked like it would be great for Eugene even from the very beginning. John, to Eugene's right, began trying to force white/blue, taking what appeared to be inferior cards, in order to play a deck that suits his style. Chris, to Eugene's left, started taking blue and black cards and looked like he was in a nice position to draft a solid blue/black deck. Eugene had no problem with this and began drafting red and green powerhouses.

Throughout the first two packs, it became clear that Eugene's decision to play red/green was a good one as he picked up a Beast Attack, two Firebolts, and a Wild Mongrel, among many other solid cards. John had begun to get very frustrated and was visibly upset when in the 11th pack of the draft slammed his hand down on a Gravedigger and began to take black cards. Eugene would have free reign of all the red and green cards to his left and right heading in to the third pack. It looked to me like his deck was rather creature-light going into the third pack. He obviously felt the same way as he only passed up one chance to take a solid creature in order to take another spell, his 3rd Firebolt.

The draft seemed to have a weak overall card quality, and Eugene appears to me to have one of the best decks at his table, the only other contender being Chris to his right. Eugene did a great job drafting, and I would not be at all surprised to see him win his table.