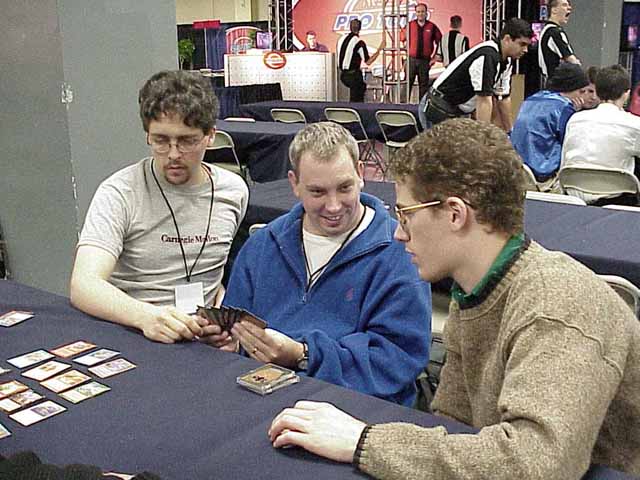 Car Acrobatic Team was the only 6-0 team on Friday. Aaron Forsythe and Andrew Cuneo have been fixtures in the Pittsburgh Magic scene for years. Forsythe was on the US National team that recently won the Worlds team competition. Cuneo hasn't been on Tour for a while, but that's mostly just because he doesn't travel to qualifiers very often. His mind remains as sharp as it was when he build the first Draw-Go deck. Andrew Johnson is a freshman at CMU this year so his career in Pittsburgh doesn't overlap with Team CMU regulars Erik Lauer or Randy Buehler, but there is obviously still a lot of Magic talent in the city. (Johnson shares an apartment with Mike Turian, Dan Silberman, and Nathan Heiss - all four of whom have Pro Tour experience.)

Their opponents come from one of the true hot spots for Magic right now: Hampton Court Palace. Ben Ronaldson coaches Real Tennis ("a really old version of tennis that all the posh people play" at the palace and so he has a house there. Yes, it's a real palace with hundreds of people living there. Ronaldson's house includes one room devoted completely to Magic and it has become the gathering spot for London Magic players including Jon Ormerod, Warren Marsh, Tony Dobson, et al. Ronaldson was the English National Champion last season and has developed quite a reputation as one of the leading playtesters in the game and the secret weapon of the European Alliance. Meanwhile Jon Ormerod is also developing a reputation as one of the top thinkers/builders/testers as well. They each devote many, many hours to the game and make quite a tandem. Warren Marsh has been on quite a hot streak lately, and has had the most success with their decks. He finished second at Pro Tour New York last spring and advanced to the quarter-finals of the Masters event this weekend playing Ronaldson's Necro-Donate deck. Interestingly, Sigurd Eskeland beat Marsh in the quarters with a U/G Survival deck designed by Ormerod! Throughout the years various cities have reached a critical mass of good players and then served as a locus for Magic technology. Costa Mesa, Boston, Vancouver, Pittsburgh, and now London are among those cities.

Hampton Court Palace (aka "HCP") went 5-1 yesterday, earning the right to draft on table one first thing this morning against the Acrobats from Pittsburgh. This wasn't originally scheduled to be feature match but Dirk Baberowksi overslept and thus Juggernaut received a match loss against Draften und Spielen, which would have been a showdown between the two top German teams. In addition, Casey McCarrel overslept and gave Huey, Ben, and Casey a match loss against Brian, Igor, and Gab. Both McCarrel and Baberowksi showed up before the round was over but it was too late and their teammates were none too happy about their first round losses.

The draft between Car Acrobatic Team and Hampton Court Palace was almost completely determined by the very first pack. Forsythe opened it and saw three good green cards: Silverglade Elemental, Snorting Gahr, and Invigorate. There was also a Forced March, a Ramosian Lieutenant, and a Counterspell. Perhaps the most efficient way to draft this pack is to take the Lieutenant and the Forced March and then shove three good green cards down the opponent's throat. HCP would then be forced to either split green or pass two good green cards to A-seat player Andrew Johnson. However, C.A.T. prefers to draft green in the middle so they didn't make that play. Rather than set Johnson up for green and abandon their original strategy, they stuck to their plan and Forsythe took the Silverglade Elemental. They obviously wanted to take Forced March so Cuneo drafted it. Cuneo's C-seat is not thought to be a great seat for black, but they just couldn't pass Forced March and if you want tp split black, then splitting it with the two end players makes a lot of sense.

Now things got really interesting. HCP seemed somewhat surprised to have the Lieutenant dropped into their laps. But they also wanted to make sure someone played that Snorting Gahr. Lots of pointing ensued with Ronaldson and Marsh seeming to indicate that they thought Ronaldson (in the C-seat) should draft the Lieutenant. The C-seat is widely considered to be the best white seat since white is excellent in Masques and this also allows the team to pass three packs worth of Troubled Healers to their teammate. Ultimately, though, it's Ormerod who makes the final decisions about who plays which color. He likes to put black in the A-seat (where teammates can feed it three packs of Nemesis black) and green or white on the left in the C-seat. Ormerod (in the middle) is almost always their blue player so it was obvious that he would take Counterspell. Faced with no good black cards, a Counterspell, two green cards, and a white card, Ormerod decided he wanted to put Snorting Gahr in the C-seat because otherwise it would go in seat A-seat and Ormerod didn't want green there since it's so weak in Nemesis (with the exception of Blastoderm). Thus he instructed Marsh to draft the Lieutenant in the A-seat. After the draft his teammates still didn't really understand his decision and they seemed to think green in the A-seat is OK, especially if it allows them to put white in the "correct" seat. But once Marsh followed Ormerod's instructions and took that Lieutenant, it was too late to turn back. Marsh took the Glider from pack 2 and wound up with a black/white deck. (He did have "good" black seat.)

C.A.T. opened a Stinging Barrier in their second pack so Cuneo took it and drafted a really solid black/blue deck. Since HCP had blue in the middle, they were forced to pass Cuneo a second Stinging Barrier when it was opened by Ronaldson, on the left. Cuneo also got a Waterfront Bouncer from Masques and C.A.T. explained to me that they really like blue on the left since so many teams don't do this and they tend to get passed more than their fair share of Bouncers and Barriers. Mike Turian taught them this strategy by destroying them with it in practice drafts.

C.A.T. got passed some nice black cards in Masques as well so they wound up having Johnson draft black in addition to Cuneo. HCP was fine with this - their theory is that black is good early but really dries up in Prophecy. Thus it's tempting to split black early, but it shouldn't work out since it's not that deep in Prophecy. The one wrinkle in this case, though, is that Johnson and Marsh were playing a black on black mirror. That meant neither player was excited to draft creatures with fear (like Fen Stalker) or black removal spells (like Snuff Out) since both categories are bad against other black decks. This allowed Cuneo to pick up this cards later in the draft than he would normally be able to draft them and splitting black worked out fine.

C.A.T. seemed to have a more sound strategy, but that wasn't their only advantage. The packs really didn't cooperate with HCP. After putting black on the right, they promptly opened Snuff Out in the middle and had to pass it. They also opened a Pit Raptor in the middle in Prophecy that they had to pass. After putting blue in the middle they promptly opened Stinging Barrier on the left and had to pass that too. C.A.T. put white on the right where Johnson would only have one shot to get a Troubled Healer, and Johnson opened up the only Healer of the draft for himself.

With the better strategy and the better packs, it's no surprise that C.A.T. beat HCP 3-0/6-0 when they played out the matches.