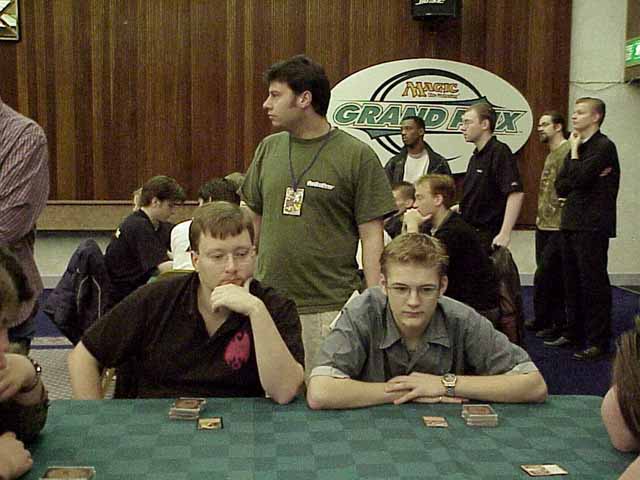 The top draft pod for day 2 is without question one of the best draft pods ever seen, rivalling the ridiculous pod that was the focus of all the attention at worlds. The pod included Pro tour Veteran David Price, limited specialist John Ormerod and perhaps the most underrated limited player in the world Bram Snepvangers. Add into the mix 2 of the YMG big names and you have a pod that is worthy of a Worlds Top 8. The unknown element in the pod was Tom Harle, a respected up and coming UK player but not in the same league as the other players on the table. With the YMG team on both his left and his right, it looked like Tom would feel the brunt of their co-operation.

This booster was all about the YMG players showing Tom that they weren't afraid to fight for their colours. With 3 colour decks being so prevalent in the format, more often than not you will be taking splash cards for your deck from the person on your left

As is expected of the format no players had any fixed colours at the end of booster 2. The fact that they were in positions 6,7 and 8 simply compounded the fact that fixing colours no longer happens early.

At the end of booster 4, Dougherty looked fixed in red with 2 Pouncing Kavu and a Zap, while Darwin and Tom had some solid cards, but nothing to fix them down as yet.

Dougherty's booster gave him a Tribal flames to further cement him in Red, while Tom seemed to be fixing white, maybe with green. With some good blue, Kastle seemed to want that as his main colour, and with both Probe and Recoil he was probably looking to tie it up with black.

Tom's booster granted him a Ghitu fire, which he could splash for with a green spine to provide the red, or by running a couple of off colour lands.

Kastle's booster gave him a great black card to put him in Blue / Black, but the booster was kindest to Tom, giving him both a great combat trick and a grizzly bear that lets him cast his Fire. As the direction switch came all three seemed to have their colours sorted, with none of them fighting directly for any colour. It looked like Darwin and Rob both wanted to take black cards, but being team mates it was more than expected that they would work together ensure that they both had good decks.

The co-operation seemed to be evident from Kastle's first pick recoil, leaving the Soul Burn for Rob, where the card would be more useful. Tom picked up a fat green creature and all 3 seemed happy with the booster.

Tom opened up the best G/W creature in the set, and took it to further strengthen his deck, leaving Dougherty a Do or Die, which helped his deck immensely.

Rob's booster granted him a much needed solid creature. Tom also gained 2 reasonable cards for his creature deck, while Darwin was left with the chaff. Interestingly Darwin chose not to counterdraft, leaving Tom the solid late picks.

With 5 colours of mana, Tom took the curse to help him against broken creatures, while Dougherty gained yet another powerful on colour card.

As the switch back arrived all three players seemed to have very solid decks. Darwin with a Black Blue control deck, Tom with a 5cG deck with solid white and Rob with a solid black red deck with a slightly expensive curve.

In this booster Rob picked up the very powerful reckless assault, but with not much to stop early Grizzly bears, it's use might be limited in the late game. At worst he could add it to his deck as a finisher.

Rob's final first pick gave him a 3/3 flyer, while Tom picked up the ridiculously broken Armadillo Cloak. Darwin was forced to take another off colour fat creature, since he was a little light in that department.

Tom's booster granted him another shackles making his deck brutal, Kastle took a 3/3 flyer to help his control style deck finish his opponents, while Rob took one of the few black flyers to deal with the skies.

Darwin's Final Booster gave him a final creature kill, leaving his control deck with a good shot at the table.

In the end all 3 players co-operated, meaning that all 3 took very solid decks to the table. Tom's 5cG had 3 - 0 potential and the other 2 looked like they had a reasonable shot at 2 - 1.