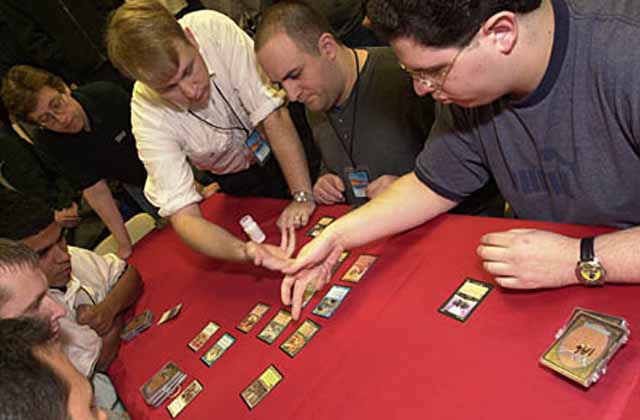 It was early Saturday morning when thirty-two teams fortunate enough to make Day 2 gathered at the Madison Square Garden to play five rounds of Team Rochester Draft to determine the Top 4 teams.

While it was necessary to get through the Sealed Deck portion to get here, most teams invested a lot of effort into practicing the very skill-intensive draft format. Plenty of the top players made it past the sealed deck gauntlet and there were quite a few interesting matchups in round one.

The first set of feature matches had to be cancelled because two of the teams - Juggernaut and Huey, Ben and Casey were missing members. Casey McCarrel and Dirk Baberowski failed to show up in time for the first round to begin and their teams were forced to accept match losses.

The new set of feature matches was chosen. Among them is The Fix vs. Potato Nation, two high profile teams that qualified on Pro points. These teams are currently at 14 points each, sharing seventh and eighth place in the standings.

One of the strategy bits that gets a lot of discussion is whether a team that wins a coin flip should choose to pick first or have their opponents pick first. At least for Potato Nation the decision was to draft first. The philosophy behind this is that, although you are forced to pick the very first cards, your opponents are forced to make more choices early on in the format where responding to what your opponent is doing is paramount.

Over the first few picks both teams carefully maneuvered trying to set up favorable color matchups. The first pack seemed to have nothing really good but black and white cards. Wise and Turian picked up Sever Soul and an Undertaker, leaving a Corrupt Official, Ramosian Commander and Nightwind Glider. Passing both white cards was an interesting decision. The Fix ended up solving that problem by having Maher counterdraft the searcher while Williams picked up a Glider for his deck and Gary drafted the black rare. 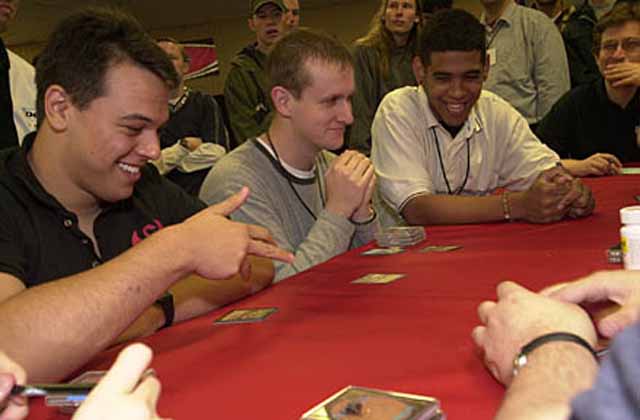 The next pair of packs featured no bombs but allowed each player to solidify their colors. Despite Wise drafting a Bog Smugglers, Maher did not hesitate to pick a Vendetta in the following pack. Wise had a chance at a second Bog Smuggler in the same pack. That would either force Maher to abandon the Vendetta and end up sharing a color with one of his teammates, or face a pretty grim matchup against two unblockable and potentially searchable creatures. Wise miscommunicated with his teammates and ended up counterdrafting a Crossbow Infantry instead.

As the draft went on, it seemed that The Fix was a lot better prepared and worked together far more seamlessly than Potato Nation. While both teams drafted by consensus rather than having one player choose the cards, The Fix communicated better and worked together more smoothly. Potato Nation had disagreements every once in a while, such as Turian picking a Coastal Hornclaw over Pit Raptor despite severe objections by Wise.

Despite all this the draft was relatively close in terms of making the correct picks. However, The Fix out-opened their opponents as well, ending up with better quality first picks.

In the end the matchups worked out as follows. Scott Johns, who had a total of seven playable cards by the middle of the draft, made a nice recovery ending up with a solid green-red deck. His opponent Justin Gary drafted heavy green, splashing black for a pair of Seals of Doom.

Gary Wise drafted a solid white-black deck with a moderate rebel chain and a pair of Troubled Healers. Maher would face it using a black-blue deck with a decent amount of evasion, but relatively low on removal.

Finally, Turian's U/B deck would really need its Massacre and Crooked Scales to stand against Williams' tremendous Rebel chain. Williams ended up splashing red for only a couple of cards, going practically mono-white.