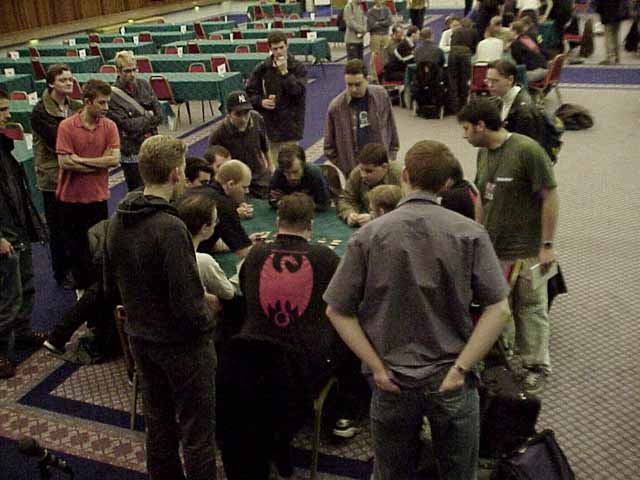 For the few of you who haven't heard of these guys let me just say that if you want to learn something about drafting then these are among the best guys you could watch, John is argueably the best limited player in europe at the moment with 6-0 at Euro's and a 9th place finish at PT NY 2000, he also boasts a top 8 in a limited Pro Tour and numerous high finishes in pro events, Steve won PT LA 99, came second at PT Mainz and has 2 GP wins to his impressive resume, Dave is known more for his constructed ability, having won PT LA 98 but his limited skill is without question.

The draft went smoothly for all three, with Dave passing to John who in turn was passing to Steve. Dave's first pick was a Fires of Yavimaya giving John a Probe and Steve a Mourning, all three continued to draft without ever really having to go into each others colours, except for Dave and Steve who shared green. From the outset it was clear that Dave wanted R/G so John quite happily picked U/B with several Probes, Excludes and Recoils all of which appear to be extremely powerful in this format and considering that none except Ed Fear, two to Johns right challenged him for U, John had the potential for a great deck. Steve eventually was B/G but never really had to fight John for black as much of Johns black was for Probes and Recoils with average picks such as Mourning making up most of his black. Steve also gave himself the option of red as he picked up two Harrows and two Assault and Battery plus he also had a Firescreamer. The only real questionable choice came in booster 5 when Steve passed up the seemingly powerful Cinder Shade in favour of a Phyrexian Slayer, interestingly the shade was eventually picked up by John on the wheel pick!

All three players have solid decks, which in my opinion was only possible by the fact that all three drafted with each others decks very much in mind so that they never had to fight for early picks. None of them opened up cards that would be considered broken giving John an advantage as his Cantrip spells may give him the advanage necessary to overwhelm his opponents where Dave and Steve will have to rely on the power of individual cards and their play skill to see them through.