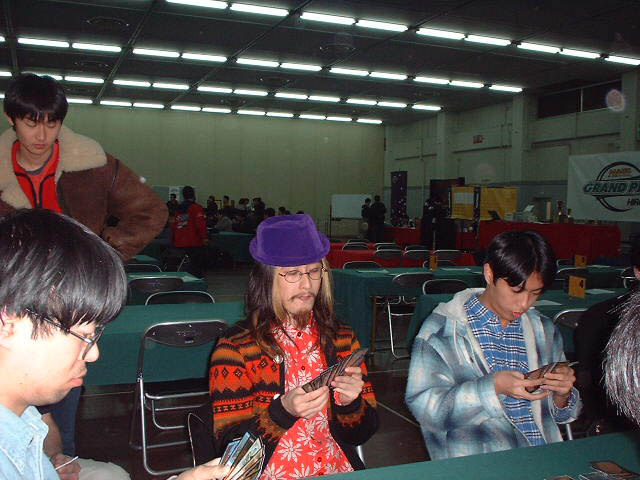 Satoshi must have happy when he opened his first pack as it contained the power rare Spinal Embrace. His choice was not made easy though by the high quality of other cards. Satoshi pondered over Fact or Fiction, Probe and the Spinal Embrace finally taking the Embrace.

The fourth pack had Treva's Attendant, Recover, Pouncing Kavu, Urborg Volcano and Simoon on offer, Satoshi taking the Kavu and basically committing to the black/blue/red combination at this point.

Pack six was another straight forward selection of Ancient Kavu over Recover and Travelers Cloak.

Pack eight had another Dream Thrush on offer but was passed up this time in favor of Defiling Tears.

Nine sees the solid choice of Viashino Grappler, yet another three power offensive creature that makes the red/black beat down deck strong.

The remaining decisions from the first round of packs were pretty uneventful so I will just list the choices:

After the first pack Satoshi is well on the way to building a strong black/red/blue deck with Komiya to his right draft heavy green/white with a splash of blue. Komiya at this point has two Thornscape Apprentice, Sulam Djinn and Repulse. To Satoshi's left Kiyoshi Sasanuma is drafting green/black/red and will be feeding Satoshi for the second booster so it is expected that the card quality will not be as good for Satoshi's second booster.

This time there is no power rare for Satoshi but he does have a hard choice between Exclude and Reckless Spite, taking the spite after deep thought. The other options from this booster included Shivan Zombie, Mourning, Ancient Kavu and Phyrexian Lens.

Moving onto booster two and the decision is between Mourning, Cursed Flesh and Tower Drake. The flying Drake is hard to refuse and is taken fairly quickly.

Booster three has more quality cards and requires longer thought than the previous pack. The options are Dromar's Attendant, Trench Wurm, Pouncing Kavu and Fire Screamer. The Trench Wurm is the one this time.

The lazy giant rears his ugly head in this booster but old Loafing is given the hand in favor of the more reliable and efficient Shivan Zombie.

The seventh booster is a toss up between Kavu Aggressor and Slinking Serpent. The forestwalking serpent is the better option this time for Satoshi.

From here things really dry up for Satoshi, his next eight choices being:

During the viewing time after booster two, Satoshi separates all his red, black and blue creatures from the other cards first of all and views them all carefully, making sure he is drafting a nice mana curve. He then does the same for the spells of his chosen colors, ignoring the chaff that he has had to draft.

The final booster in this draft should be better for Satoshi, as he is being fed by Komiya again who is not drafting Satoshi's primary colors of red/black.

The pack that Satoshi opens has some interesting options. He ponders over a Benalish Heralds for quite some time, the first white card that he would have intentionally drafted but easily able to pay its activation cost to draw cards. Remember Satoshi did draft a Coastal Tower late in the 2nd booster which would help with playing the Heralds. He eventually passed up the offer for this power card instead taking a Tribal Flames, much needed removal as Satoshi had drafted mostly creatures until now. Other options could have been Tower Drake or Recoil but as I said the removal was more valuable right now.

The second booster sees another interesting choice, where the options are Pouncing Kavu, Hooded Kavu and Dusk Walker. Satoshi takes the Hooded Kavu which was due to fact that the Hooded Kavu fitted his mana curve better than another five coster. This was an excellent decision after seeing the deck contruction process of Satoshi.

Pack three was either Rainbow Crow, Shivan Zombie or Phyrexian Reaper, Satoshi taking the low costing Shivan Zombie to assist in getting the right mana curve. This just reiterates the importance of the review time, to assess what area you deck needs strengthening in. In this case Satoshi realized that he needed more low end mana cost spells to balance out the more expensive creatures he had drafted in the first two boosters.

Booster four has a number of solid options; Shoreline Raider, Ravenous Rats, Vodalian Zombie and Viashino Grappler. I was supprised once again as the Rat was taken, another mana curve and consistency choice, as the Vodalian Zombie could have been taken as a two coster but would have been less reliable with the blue in the casting cost.

A real treat was passed on in pack five making the choice of Sleeper Robe very easy.

Pack six delivered some more removal in the form of Zap, taken over Kavu Aggressor and Dromars Attendant.

Seven had three strong creatures, Shivan Zombie, Kavu Runner and Metathran Aerostat. The aerostat can be amazing but the two blue casting cost makes this option not so good for Satoshi. He took the haste option, Kavu Runner.

The remaining packs were a little low on quality bar the tenth pick Pouncing Kavu. The rest of draft one for Satoshi looks like this:

After the draft I asked Satoshi what his thoughts were on his draft. He said that he was a little concerned about big green fatties because his black and red can't block them and he did not get lots of removal. Overall Satoshi seemed pretty happy with his draft.

Satoshi's deck construction process included arranging his creatures into mana cost groups and then his spells. This allows him to see how his mana curve is and make changes based on what part of his curve needs fixing.

Satoshi had drafted four Geothermal Caves and was considering playing with more to power up his Obilterate, but thought better of it, going for the more consistant mana base which much of his draft stratergy was based around.

This looks like a strong deck that should reward Satoshi with the consistency he has focused on during the draft.