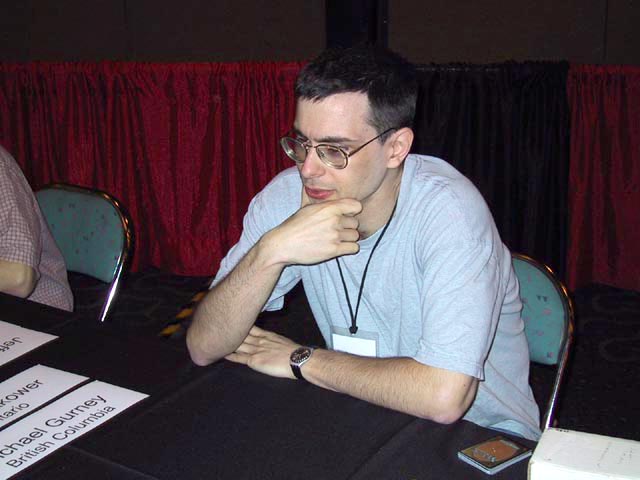 This draft table was packed with some of Canada's best players. Jay Elarar, Michael Gurney, Gab Tsang and Gary Krakower were all present, which probably made it the most difficult pod in the room. Tsang and Krakower were seated next to each other, and were probably looking to work together. The mark of a good Rochester drafter is usually to work well with neighbors, but the element of the color switch in Apocalypse might cause even these two experienced players to go into each other's colors.

The first pack was opened, and it contained Armadillo Cloak, Exclude, Phyrexian Slayer, Spirit Weaver, Kavu Scout, Kavu Climber and Wayfaring Giant among other cards. The first player took Armadillo Cloak, the second player took Exclude, and Gary grabbed a third pick Phyrexian Slayer. This made Gab more than happy to take Kavu Climber, as the nearest green drafter was three seats away. The second pack was bad news for Gary. It contained Tsabo's Decree, and the player feeding Krakower took it, putting himself into blue/black. Gary still stayed on course, drafting a second pick Duskwalker. Things started to look good for Tsang, who got a third pick Charging Troll.

If Krakower felt bad after seeing his neighbor go into black, he probably felt much better when he opened Ghitu Fire. He happily scooped up the X-spell, while Gab took Explosive Growth. Robert Howden, who was sitting to Gab's left, took a Probe, putting him far away from Gab's colors. It was now Tsang's turn to open, and his pack contained plenty of quality cards. Gab had the choice of taking Kavu Climber, Charging Troll, Exclude, or Treva, the Renewer. This wasn't exactly a hard pick, and Gab took the Dragon. Krakower had the last pick, and took Phyrexian Battleflies and a Yavimaya Barbarian, hinting that he might go into green.

The next pack saw Tsang and Krakower stay on target. Gary picked up a Marauding Knight and a Cursed Flesh, while Gab drafted Prison Barricade and Restrain over a Dream Thrush. In the following pack, Krakower made an interesting choice when he drafted Obliterate over Hooded Kavu. However, this proved to be the right play, as the Kavu came back to him. A Smoldering Tar was taken fifth pick by Krakower in the next pack, while Gab went further into blue with a Prohibit. A second Smoldering Tar followed for Krakower when the next pack came around, and Gab picked up an Armadillo Cloak.

Planeshift was now opened, and Gab took Hobble while Gary got a Phyrexian Bloodstock. The second pack saw Gab take Alpha Kavu, and Gary drafted Darigaaz's Charm. This further suggested that Gary was going to go into green as a third color to supplement his black/red deck, which meant that he would be fighting with Gab over the color. However, toes would not be stepped on yet. Tsang took a Samite Pilgrim in the next pack, and Krakower picked up a Volcano Imp.

The following pack presented a strange situation. Robert Howden, who was sitting to Gab's left, opened up a Questing Phelddagrif. Gary turned and smiled at Gab, with an expression that said, "I can't believe you're going to get the Hippo and Treva". However, it didn't happen. Howden took the Hippo, which was strange considering that he and Gab seemed to be working well together until that point. What made it a little harder to understand was that Howden was pretty much locked into blue/black/white, and would need to extend into four colors to play the Hippo. Gab was probably surprised and disappointed at this turn of events, and he took a Samite Pilgrim second pick. Meanwhile, Gary got a Terminate.

Both players rounded out their decks in the next pack. Gab went further into blue with Silver Drake, while Gary drafted Lord of the Undead. Magma Burst was opened by Krakower in the following pack, and he was happy to take it. Tsang picked up a Treva's Ruins in the same pack to smooth out his mana base. As Planeshift finished up, Gab picked up a third Pilgrim, along with Gerrard's Command and a Quirion Explorer. Gary drafted Bog Down and Crosis' Charm. He had two solid green cards at the time, but was not entirely committed to the color, which meant blue was still an option.

At this point it was time for Apocalypse to be opened, and Krakower took a third pick Grave Defiler. He did not have many Zombies at the time, but he did grab Lord of the Undead back in Planeshift. Apocalypse contains plenty of Zombies, and Krakower was looking to draft a couple to give his deck some synergy. Gab took a Coastal Drake, and picked up a Jaded Response when the pack came back around. Meanwhile, Krakower got a 14th pick Quicksilver Dagger. The next pack saw Gary draft a Phyrexian Rager, and Gab took Coalition Honor Guard over AEther Mutation.

Krakower opened up the next pack, and cemented green as his third color by taking Consume Strength. Gab drafted a Jungle Barrier second pick. The rest of Apocalypse was uneventful for both players. Tsang opened a pack that had nothing good in his colors, and the best option was to take Jilt first pick (keep in mind that he is not playing red). Gary rounded out his deck's Zombie theme along the way, picking up Strength of Night and a Quagmire Druid.

Both players were hurt significantly by Apocalypse. This is understandable in Gab's case, as he was locked into an allied color configuration, which only allowed him access to one enemy color combination. Krakower's case was a bit different, as he did not lean heavily towards a third color until Apocalypse. Perhaps the biggest factor working against both players was that the packs simply didn't go their way.

Still, the first two packs worked out fine. Gab has a strong creature base, highlighted by Charging Troll and Treva. Plus, he has plenty of combat tricks. The fact that he drafted three Samite Pilgrims means that combat will always be a dangerous situation for his opponent. Still, he's probably very disappointed that the Questing Phelddagrif was counterdrafted when it seemed to be his for the taking. Krakower's deck is solid, as it contains plenty of removal. A pair of Smoldering Tars and Terminate should help clear the way for his attackers, and having Ghitu Fire to finish off the job certainly helps.