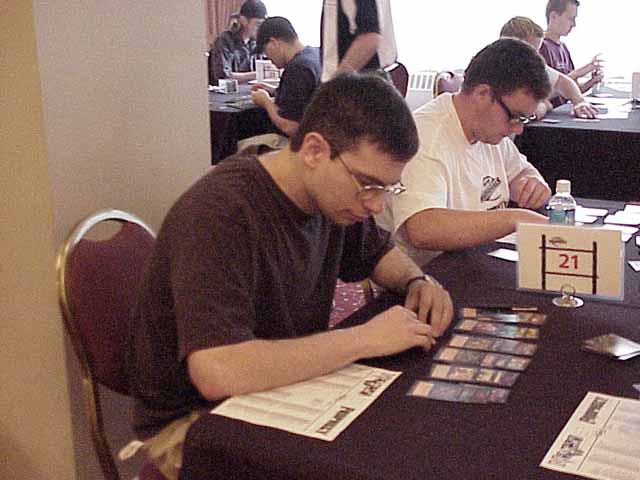 No matter what draft event you go to, there always seems to be some table for the first draft that's loaded with good players. Canadian Nationals this year was no exception. Matt Vienneau, Gary Krakower, and Ryan Fuller all landed at the same table. At least none of them were sitting next to each other. I watched Krakower, who was feeding Nathan Kelley and being fed by Steve Wolfram.

Krakower took Snuff Out from his first pack, passing along Trap Runner, Blockade Runner, and Invigorate. His next pack was decision time: Muzzle, Cho-Manno's Blessing, Deepwood Ghoul, Rushwood Dryad, Wall of Distortion, or Nether Spirit? Krakower elected for Deepwood Ghoul and I have to say I agreed with him. It isn't the best card in the pack, but if you're going to draft black in this format you have to set yourself up for Nemesis, where black is at its best. By taking the Deepwood Ghoul, he effectively cut off the supply of black cards going to the players on his left and set things up so they would pass him good black cards in Nemesis. 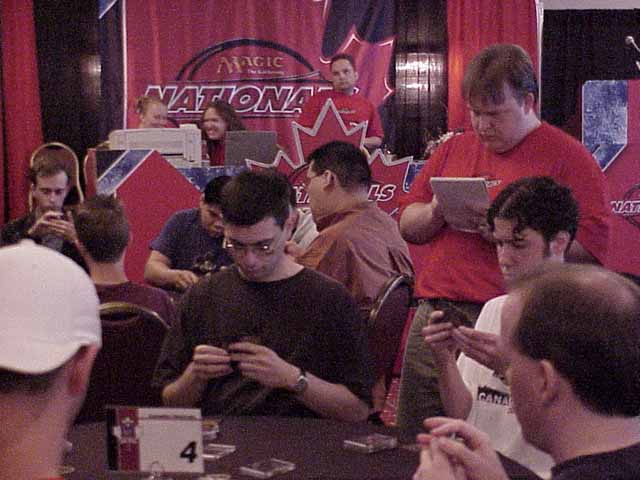 There was more decent white in the next pack, but I think he knew it was too late. He took Saprazzan Legate (over Bog Smugglers). He then took 4th pick Cateran Persuader (over Saprazzan Outrigger). Masques black is normally better than that and he must have feared that someone on his right was also drafting black. However, it isn't actually that scary to fight someone on your right for black since the best black is coming from the left, in Nemesis. Krakower's next two picks were a second Cateran Persuader and Cackling Witch. The eighth pack dropped a gift into his lap: Cateran Brute. With two Persuaders already in his pile, Krakower was delighted to pick up a Brute that late.

After counterdrafting a Tremor, Krakower then picked up two late Blaster Mages and a Kyren Glider. That may have indicated to him that red was underdrafted on his right and he could expect to see more good red cards once Prophecy rolled around.

Krakower's first pack screamed "Welcome to Nemesis!" with Rathi Fiend, Vicious Hunger, Belbe's Percher , and Spineless Thug. Krakower took the Fiend and probably expected to get one of the other three back for his 9th pick. Pack two forced him to choose between Seal of Doom and Ancient Hydra. Krakower decided to stick to his color and took the Seal. His next picks were, in order: Vicious Hunger, Vicious Hunger, Spineless Thug, Belbe's Percher, and then Rusting Golem. Monoblack looked both tempting and viable at that point. When he got his original pack back it did indeed still have Spineless Thug in it. At the end of Nemesis his deck didn't have any real bombs, but it looked very solid.

Prophecy was quite interesting. The first pack had Agent of Shauku and a Troubled Healer. Krakower didn't really have a second color, but it wasn't clear that he needed one either. He went with the Agent of Shauku and now wanted Bog Glider even more. (The one thing he did not get in Nemesis were any copies of Rathi Intimidator.) The second pack had another Troubled Healer, Steal Strength, and another Agent of Shauku. Krakower continued to decline the invitation to splash white and took Steal Strength. 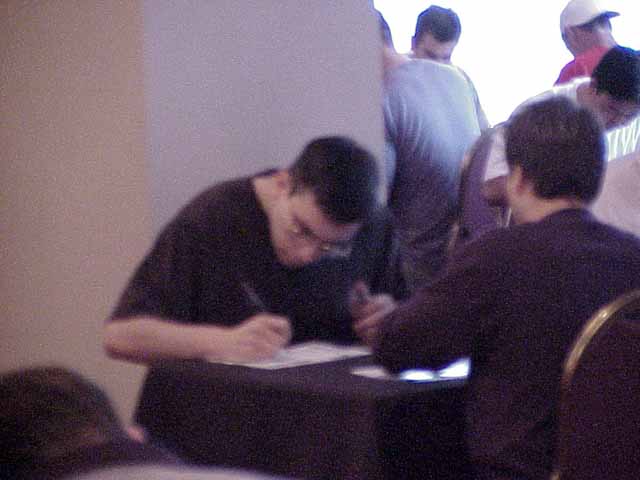 The third Prophecy pack is where I started to disagree with him. His choices were Despoil, Fault Riders, Outbreak and Silt Crawler. Since he got passed all that really late red in Masques, I thought he should pick up a red splash, especially since none of the black cards are very good. However, Krakower stuck to black and picked the Outbreak. In his next pack he took Greel's Caress over Rhystic Syphon. I thought the Syphon would be a nice finisher in an aggressive black (or black/red) deck, but he seemed to prefer the defensive card. Then he took Avatar of Might as a defensive draft rather than take a Panic Attack that he could still play. Next up was Coastal Hornclaw over Keldon Berserker and Death Charmer followed by Fault Riders (finally a red card). After that the card pool dried up, though he did get a late Panic Attack.

All in all, Krakower's deck should be solid, but he should have known black would be bad in Prophecy - it usually is in the last set of a block - and he might have been better served to splash a color that is good in Prophecy.