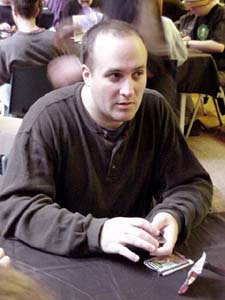 Amsterdam starts and none other but the Canadian Gary Wise is attending. So we decided to see what the person, who tells us what to draft in Limited and at sideboard drafts and if he does well with it.

After some difficulties with marked cards that were found all over boosters, the head-judge Gijsbert Hoogendijk decides to give every player free sleeves so that markings won't play a role.

When Gary opened the first booster to count the cards, he noticed he had a green uncommon. Actually the best green uncommon you could hope for: Overrun.

The first pick was no actual hard time for the Canadian and he only browsed through the rest of the booster to see what could come around or not. Since he only had another green card in the booster, Rabid Elephant, green looked solid.

It looked even better when he got a Nantuko Disciple, Metamorphic Wurm and a Wild Mongrel joined his pile. He actually took a Disciple over an Elephant Ambush, which only made him more confident in taking green when there didn't seem to be anybody from his right side picking green. The first decisive moment for Wise was when the fifth booster got passed and it didn't have any playable green cards, forcing him to choose a second colour. He went with Mad Dog, thus trying to get a fast red/green deck using Overrun as finisher.

Going into Torment Gary had five creatures and two game breakers (Overrun and Demoralize). He opened a Carrion Wurm a hypochondria and a Basking Rootwalla and kept with his plan taking the little walla. He then took a Longhorn Beast over a Nostalgic Dreams, which would eventually come back, realizing he needed more creatures since he only had 6 at that moment. His bet in playing red paid off with three copies of Fiery Temper to give his deck solid removal. A little bit surprising was that he got passed another Carrion Wurm from the left, where his opponent was suspected of being into black.

Before they started to draft the third booster Gary had a comment about his deck: OH MY GOD!!! MY DECK...

He still needed some creatures for his deck to make it even more aggressive and he hoped to be able to do that in Judgment.

Although there were some good playable creatures in his first boosters he went on to take two Arcane Teachings and a Swelter. The first pack and other packs later on Gary chose to pick non-creature over creature spells. He explained this to us by argumenting that there were three creatures left in the pack and that one should make it back to him. Still, he was able to net a few creatures like Spellgorger Barbarian, Nullmage Advocate and Ironshell Beetle. In the end he had 14 creatures plus Acorn Harvest.