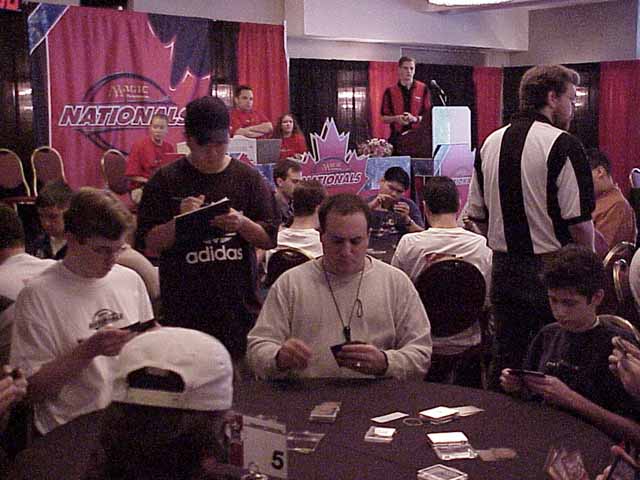 When Gary Wise sat down at his first draft pod, I needed to see if Mr. "Limited Skills" would be able to repeat his undefeated performance at last year's Canadian Nationals. The draft pod seemed fairly inexperienced-- the only person I recognized was Anthony Ferraro, the BC Regional Champion, who was seated on Gary Wise's left. Things were definitely looking up for Gary since the person on Gary's right at the table, Paul Thiessen, looked like the least strongest drafter of the group.

Gary always tries to establish his colors early in the draft and I felt nothing would change that at table of low caliber. On to the draft�

Gary opened his Mercadian Masques pack and found a range of strong cards, included three black cards: Snuff Out, Undertaker, and Scandalmonger. Snuff Out being the best card, Gary placed it in his drafted pile. Gary's next pick was certainly influenced by his mentality of establishing colors early in the draft as he picked Undertaker over Nightwind Glider. Though Undertaker is no slouch, some people feel Nightwind Glider is better, especially since it fits very nicely in the Rebel decks players like to draft. Unfortunately for Gary, the next pack he was passed contained a Thermal Glider. He could resist white no longer; Gary bit his lip and took the flying Rebel. That pick paid off as the rest of his Masques picks included Charmed Griffin, Alabaster Wall and late picks Steadfast Guard, along with a Charm Peddler. Of note, the predicted "scrub factor" of Paul Thiessen, who is playing red, showed as he passed a possible seventh pick Brawl on to Gary, who wondered in disbelief at the randomness around him. 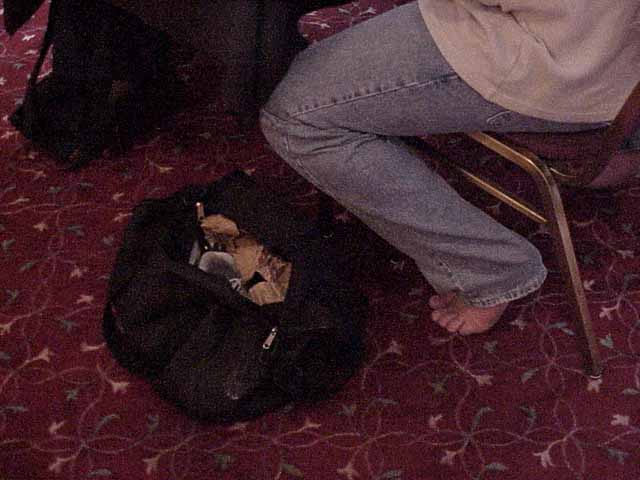 Gary's deck was looking decent as the Nemesis white was being passed to him by Anthony Ferraro. Gary was able to assemble a small Rebel army of two Defiant Falcons and a Lawbringer. He picked up a bomb in the form of Flowstone Thopter, got the creature removal spells Topple and Massacre. What Gary didn't know was that the Nightwind Glider that he passed Anthony Ferraro in Masques made him want to play white as well. I saw Anthony take Voice of Truth, Silkenfist Order and Defiant Vanguard for his own deck. Still, Gary looked to be in good shape as he had nineteen playable cards after just two packs.

Prophecy came along and with it came a Legendary Spellshaper by the name of Mageta, the Lion which Gary slammed into his pile. Things continued to look good as Gary got a Reveille Squad second pick and a third pick Fen Stalker, but things got really scary as the next two picks contained absolutely nothing in Gary's colors. Gary shook his head at his two poor quality packs until his roller coaster draft began an upward surge once again. The rest of Prophecy gave Gary an Agent of Shauku, Soul Strings, Noxious Field and two Excises (which he didn't play) to round out his above average white-black deck. 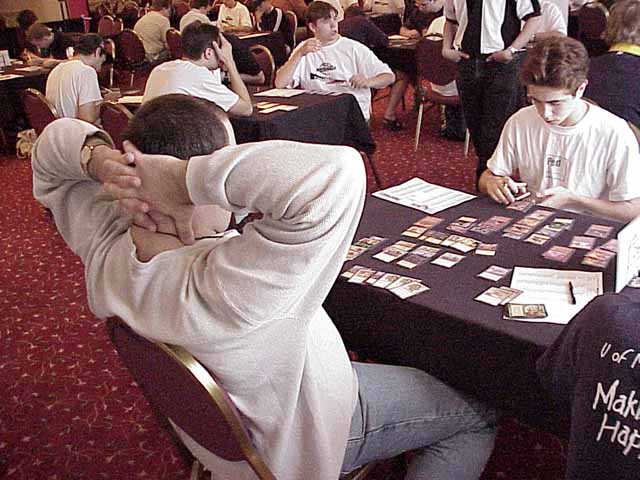 I talked to Gary afterwards and he told me he really regretted passing that Nightwind Glider to Anthony: "My deck is good, but it could have been 'gas'." I, of course, agree. Gary's deck could have much better, but with his vast knowledge of Limited play, I expect no less then a 3-0 from Gary.