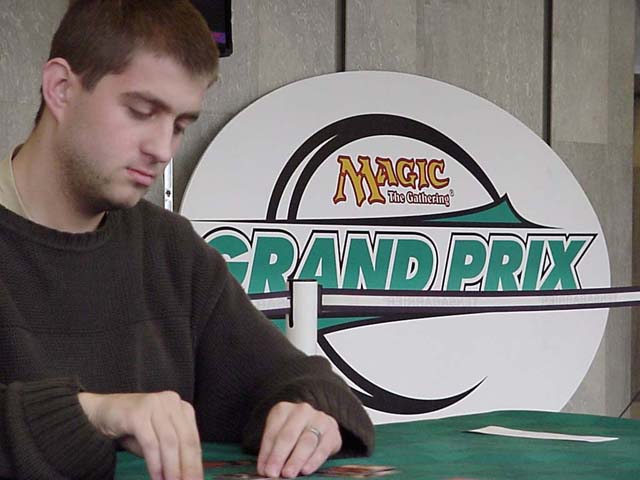 Jakub has had lots of success at the Pro Tour in the past, but this is first chance to shine at a Premier Event in his own country. He did well enough on the first day to make it into the Draft day in the second pod. He was drafting between Ryan Fuller and Kristian Kockott, a lesser-known German player, who would be passing to him for the first set of boosters.

Kristian's first booster wasn't particularly powerful, leaving him with a choice between Duskwalker, Jade Leech, Glimmering Angel, and Nomadic Elf. He went for the Jade Leech. Jakub had a better booster, his main choices were Urza's Rage and Tower Drake - a Scorching Lava was also present in the booster but he wouldn't take this over Urza's Rage. He took the Red card.

So now Slemr was faced with a decision to branch out into a second color immediately, as he was passed the Duskwalker, Angel, and Nomadic Elf. Considering that black/red was the best color choice available and took the Fear creature.

There was nothing in either of the Czech's colors in pack three, even though Kristian had taken Exclude, so Slemr took the Sparring Golem instead, which at least wasn't off-color, but he was rewarded for persevering in Red/Black as he then got Hooded Kavu, Phyrexian Slayer (which he took over Shivan Zombie), Phyrexian Reaper, Stun, Urborg Phantom, and Hypnotic Cloud.

In the next set of boosters he would be passed to by Ryan Fuller. A quick look at Ryan's deck revealed that Fuller had gone green/white also, so that Jakub was in a pretty good situation.

Ryan picked up a Llanowar Knight first pick - which was already his third, passing Jakub only an Ancient Kavu. Slemr was forced to decide between Tsabo Tavoc and Agonizing Demise, and he took the removal spell. However he managed to pick up Tsabo Tavoc anyway, as even though it is a rare, there was another one in the next booster.

Jakub continued to improve his deck by picking up Soul Burn, Duskwalker, and a couple of Ravenous Rats, but Ryan's deck was starting to pick up as well, since his decision to branch into blue paid off.

He drafted an Exclude, Stormscape Apprentice, and Vodalian Serpent in quick succession but also did not neglect green cards, with a Thornscape Apprentice.

Pack three was Planeshift and Jakub would once again be passed cards by Kristian Kockott, who made what could be described as a questionable decision where he took March of Souls over both Silver Drake and Hobble.

Planeshift was slightly disappointing for Jakub as although he picked up three Caldera Kavus, a Lava Zombie, and a Nightscape Familiar, he missed out on the removal spells such as Magma Burst, Flametongue Kavu, or even Strafe.