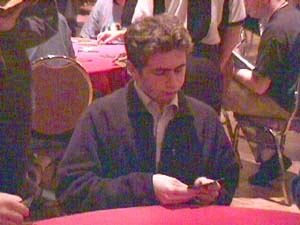 "Canada's Rising Star" is exactly the sort of moniker Jeff Cunningham resists. Since his Top 8 at Pro Tour - San Diego, everyone's been expecting big things from him. And he hasn't disappointed, making Top 48 at Pro Tour - Osaka and second place at Grand Prix - Tampa. But scrutiny has a habit of turning anything but the wildest successes into supposed failures. Cunningham prefers to ignore the bombast and high hopes, approaching every match with no preconceptions. At the table he wears a mask of concentration. It disappears once the match is over, replaced with his usual friendly, outgoing personality.

Cunningham's plan going into the draft was shoot for red-green, his favorite combination in this format. Cracking his first pack he saw Sylvan Might and went right for it, eschewing Springing Tiger and Treetop Sentinel. He got a second crack at a Tiger, and took it. Engulfing Flames third further cemented him in his strategy.

The real decision to commit came fourth. Looking at Muscle Burst, Ember Beast and Reckless Charge, Cunningham decided that red-green was locked in and took the Beast. Later he would look back and wish he'd taken the Burst, but it all sorted itself out in the end. He scored Demoralize and a pair of Cartographers, then the Thermal Blast from his opening pack came all the way around, and things were looking golden. A Refresh rounded out the notable cards from Odyssey. He had plenty of good tricks, but few creatures to go with them.

Muddying the waters to his right was Ben Roth, whose first-pick Ivy Elemental convinced him to dig up green's treasures. Fortunately he wedded it with black, so all was not lost. Jon Boutin to Cunningham's left was co-operating nicely, building himself a black-white deck.

Cunningham busted his Torment pack, and couldn't believe his eyes. The cards of his colors were the mediocre Pardic Lancer, Sonic Seizure and Nantuko Calmer. Grinning evilly were such off-color gems as Possessed Aven, Sickening Dreams and Mesmeric Fiend. Cunningham waffled. He couldn't resist the call of the Aven. He followed up with Acorn Harvest over Ghostly Wings and Balshan Collaborator, but still had notions of drifting into blue-green.

Then came the turning point. Fiery Temper brought him to his senses, sending the slow Breakthrough by the wayside. Still, Torment was making it tough on him. He got Petravark and another Acorn Harvest, but had to fill out with Krosan Constrictor, Pardic Lancer and Longhorn Firebeast. He crossed his fingers and hoped Judgment's bounty would overflow Roth's interference.

It was an auspicious beginning: Fledgling Dragon. Cunningham toyed with the idea of Phantom Tiger, but reconsidered. Ironshell Beetle and Nullmage Advocate followed and he started to get worried. Lightning Surge allayed his fears. Worldgorger Dragon proved too big to pass up, then came Swelter.

Cunningham then took Serene Sunset over Anurid Barkripper, citing his pair of Cartographers in the three-slot as well as a worry that he'd be short of combat tricks. Next he took Mirari's Wake over Book Burning, which he later called a mistake. At the time, he didn't think Book Burning offered him anything, but with two Harvests, a Tiger and a Dragon, it could be an absolute beating. The rest of the pack was just gold. Lava Dart, Battlefield Scrounger and Goretusk Firebeast filled out his ranks.

Overall, Cunningham was very happy with his deck, and readily admitted that Judgment made all the difference. Between the two Dragons, the Lightning Surge, and the creatures to fill out his ranks, it turned his deck from an awkward pile to a killing machine. As always, he was cautious of his chances, but he seems suited to run the table.