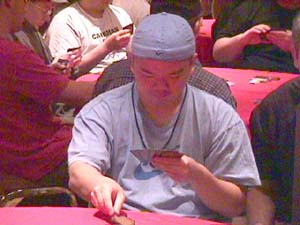 Thousands of miles normally separate these two players – Jeff Fung from Vancouver and Loius Boileau from Quebec – but today they are side-by-side at table 1. The battleground is Odyssey/Torment/Judgment booster draft, a format still in its infancy. Have these two figured it out in time?

The table was situated as such:

Boileau's first pack offered him two good options: Ghastly Demise a Springing Tiger. With black being the biggest gambit in Odyssey (it is too easy to get cut off in Torment), the fact that the pack also contained a Childhood Horror but no other good green cards
led Boileau to take the 3/3.

Fung, to Boileau's right, Had to pick from Firebolt, Ember Beast, Dusk Imp, and Kirtar's Desire. He chose the most powerful card, Firebolt, even though it meant passing what some consider the second-bet red common, Ember Beast, to his left.

Boileau saw the Ember Beast swimming in a sea of weak cards and took it second. Fung took Patriarch's Desire with his second pick, keeping his options open.

In the third pack, Fung saw a Nantuko Disciple and a Krosan Archer, and took that as a signal that Hahn was not green. He took the Disciple; the fighting had officially begun. Boileau was stuck taking an Aven Cloudchaser, also keeping his options open.

The next few packs cemented both of them in green, as Boileau had taken the Archer Fung passed. Fung took Elephant Ambush and passed Boileau a Springing Tiger. Fung then tried to cut off green, taking Crashing Centaur, Krosan Archer, and two Refreshes, passing red stuff to Boileau: Reckless Charge, Mad Dog, Halberdier, Need for Speed and Scorching Missile. (Somewhere in all these green and red picks was a Psychatog floating around. There's some sketchy drafting going on at this table.) At the end of pack one, Fung nabbed a Reckless Charge of his own as well as an Anarchist, and it looked like they both were thinking red/green.

To Fung's right, Hahn was solidly red/black, meaning there were three red drafters in a row (and red is thought to be the weakest color in the block). To Boileau's left, Sam Lau was reaping the rewards of the red/green string, grabbing the best cards in the other three colors.

With Torment, the only way Fung and Boileau could salvage their drafts was if one of them had the wherewithal to switch into black. Fung was the best candidate since he already had a Patriarch's Desire.

Boileau had a big decision to make with his first Torment pack: Fiery Temper or Faceless Butcher. He thought for a minute and then decided on the red card, setting Fung up nicely. Fung's first pack was abysmal, and he reluctantly took the mediocre Organ Grinder.

Boileau stuck with green in the next few packs – Arrogant Wurm, Acorn Harvest x2 – and passed the black to Fung – Butcher, Chainer's Edict, and Mesmeric Fiend. In pack five, however, Boileau stuck it to Fung by counterdrafting the bomb Shambling Swarm when there were no good red or green cards. The rest of Boileau's Torment pack was mediocre at best; he picked up a Pardic Arsonist, an Overmaster (over Krosan Constrictor), a Longhorn Firebeast, and a Pardic Lancer. Fung, on the other hand, could only dream of mediocre. He had to counterdraft a Hypochondria and two Circular Logics (the second over a Centaur Veteran... splashing blue perhaps? Or just despise the six-mana 3/3?). He did get a Gravegouger and a Putrid Imp for his pile, and took a Tainted Wood over an Unhinge and Krosan Constrictor. Not super.

Boileau and Fung passed a lot of blue in Torment, and David Sonnenberg, two to Fung's right, was the recipient. His blue/green deck was coming together quite nicely. 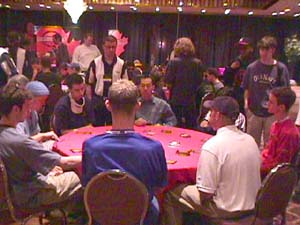 Judgment started out looking like a disaster for both Fung and Boileau. Fung did get a first-pick Phantom Centaur, but his next three picks were Nullmage Advocate, Cabal Trainee (eeewwww), and Earsplitting Rats. Boileau's picks were even worse: Sudden Strength first, followed by Nantuko Tracer, Anurid Swarmsnapper (over Giant Warthog), Serene Sunset, and Dwarven Scorcher. Ugh.

Things picked up in the middle of the packs for the two of them. Fung got back-to-back Tracers and then a gift 7th-pick Guiltfeeder. Someone upstream vastly underestimated that card. Boileau grabbed two copies of Barbarian Bully (one chosen over Firecat Blitz), an Anger, and a Browbeat.

Boileau's deck is severely lacking in removal. He has a Fiery Temper and a Pardic Arsonist (not exactly reliable), and I wouldn't be surprised if he ended up running Kamahl's Sledge. He is going to have to win via attacking, and I'm not sure his creatures are good enough. Boileau somberly predicted a 1-2 record for himself, and I must concur with that grim forecast.

Fung is in a little better shape. The switch to black was a smart move, and if he splashes the Firebolt, his deck should have most of the bases covered. He'll have a few weak cards, but he should be able to scrape together a 2-1. Not bad considering he was fighting for green the entire draft.