Dutch player Jelger Wiegersma has had phenomenal success on the European Grand Prix Circuit. Prague is no exception as Day 1 saw him close out with yet another perfect record at the top of the standings. 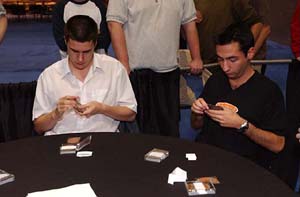 Wiegersma and Levy also drafted next to each other at the Masters in HoustonHis first draft pod of the day is a mixture of both experienced and inexperienced players. Experienced French player Raphael Levy is the only other player on 9-0 and Jelger's first opponent of the day. Also on the table is the Swede Anton Jonsson, winner of GP Seville and an extremely solid drafter. The table also has another GP winner in Alex Mack, although that was in a constructed format.

Jelger's first booster had some solid black cards, the best being Death Pulse, but the obvious highlight was the Butcher Orgg in the rare slot. Jelger took it. Unfortunately to his right Nikolaus Eigner had first picked a Sparksmith, almost certainly setting up a collision on red.

The second booster presented Jelger the choice of Lavamancer's Skill, Wirewood Savage and Cruel Revival. The Dutchman thought about it for a while before taking the Skill. It might have gone very badly had he taken the Revival as it would have put him in black-red, the same colors as Eigner on his right, who'd taken a Revival as his second pick.

As it happened an Essence Fracture came third pick, cementing Jelger into blue-red. The rest of the booster wasn't so kind as Eigner was cutting off red. Jelger only really picked up Ascending Aven, Lonely Sandbar, Imagecrafter and Riptide Biologist for his deck. He took some white cards in the middle of the draft as a potential "get-out" into blue-white soldiers, splashing the skill, should red dry up completely.

The second booster opened up a dilemma for Jelger as it contained Silvos. Wiegersma shipped it in favor of the less impressive Skittish Valesk, but it proved correct as no green came. He followed the Valesk with a Pinpoint Avalanche (over Thoughtbound Primoc) before the next booster presented another interesting choice of Skill, Fateshaper, and Lightning Rift. Wiegersma took his second Lavamancer's Skill.

Legions wasn't really broken but allowed him to solidify the deck with a couple of Echo Tracers, Master of the Veil, Macetail Hystrodon and a couple of Warped Researchers.

Afterwards Jelger said the only real choice was the second pick. He doesn't normally draft blue-red but once he'd taken the Lavamancer's Skill all the picks were fairly straightforward. There was a moment when he realized the red was being cut off and nearly went into white, but the second booster meant he wouldn't have to give up the Orgg.

He liked the deck and reckoned it had a good shot at 3-0 but was probably more likely 2-1.