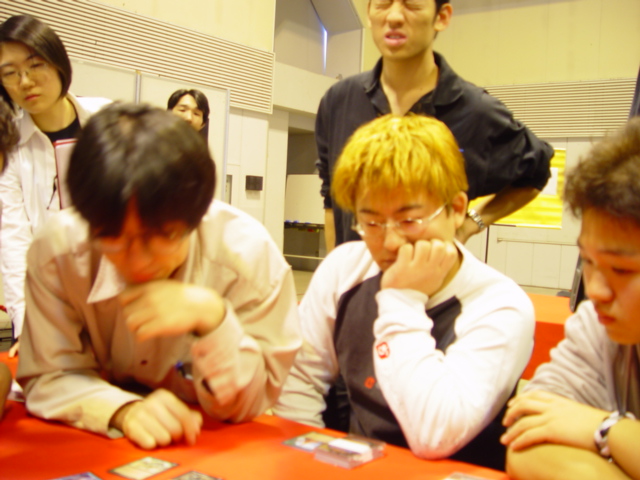 This was easily the most high-powered table of the first draft. Ikeda, Fujita and Okamoto would be a safe bet to run an average table, and now they had to contend with each other. Rochester Draft is easily derailed, and there were bound to be some shenanigans what with Onslaught being so new. At least Okamoto could rely on Tsuyoshi Fujita on his right to co-operate. Jin Okamoto, the last APAC Champion, is one of Japan's hot commodities and an odds-on favorite to be the next Japanese player to crack a Pro Tour Top 8. It's his draft that I'll focus on.

The draft started two to his left, so he got to see how things were shaping up. He started in on black early when he saw just two players on the opposite side drafting it. On his right, Fujita was signalling for white, and Kubota on his left wanted the same. A very late Barkhide Mauler in the second pack convinced him that green would be his second color.

Fujita dipped into blue with just one other blue drafter at the table, and Kubota started to harvest the good red that was being fed to him. The goods continued to make their way to Okamoto. One pack he had the choice of Barkhide Mauler, Screeching Buzzard, Wirewood Savage and Wretched Anurid, taking the last one.

Things started to get snarled on the other side, with neighbors fighting over colors, and it started to spill into Fujita, whose neighbor Fujishiro started stealing his blue. Players picked up on the shortness of green and red drafters, and things started to get really messed up. Okamoto stuck to his guns, drafting only green and black, insulated by Fujita and Kubota who refused to fight with him.

His first opened pack gave him Nantuko Husk, but what was interesting was that the Future Sight flowed all the way around the table to Fujita, whose eyes grew wider with every drafter who refused to cut him off. He hurriedly put it in his pile before they realised their mistake.

In the second set of packs Okamoto continued to force his early game, taking Wretched Anurid over Soulless One and Elvish Warrior. The addition green drafters at the table had him pinched, and he was sure he was going to be heavy black. The next three packs were pretty bare, with his neighbors scoring picks like Shock and Mistform Dreamer while he had to content himself with Birchwood Rangers and expensive picks like Anurid Murkdiver. He took the flexibility of Krosan Tusker over the evasion of Elven Riders.

Things were still going great for Kubota in the third set of packs, when he started by wheeling Pinpoint Avalanche and Daru Healer. Okamoto was happy to get Fallen Cleric, but he clearly needed more. He took the possibly crippling Head Games over Taunting Elf, and then Vitality Charm over Shepherd of Rot and Aphetto Vulture. Voice of the Woods was still in the next pack when it got to him, making him do a quick elf-count. The result made him choose Swat instead. The next pack was chocked with goodstuff: Snarling Undorak, Death Pulse, and Nantuko Husk, which Okamoto took. The pack he opened had a Swat and not much else. The last pack, the one he'd have to wait on was stuffed with Cruel Revival, Smother, Wretched Anurid and Symbiotic Elf. He got the last two, and was happy to have a symbiote to go with his two Husks.

Okamoto was dismayed at how things had turned out. It wasn't terrible. The three Wretched Anurids jumpstarted his tremendous beatdown, ramping up to Barkhide Maulers. He had a Dirge of Dread to play finisher and at least some removal. He laid out all his playables and started to build. The first cuts were the Invigorating Boons (for lack of cycling) and then Disciple of Malice. Leery Fogbeast left the three-slot, and Birchlore Rangers looked like they wouldn't survive another pass. Sure enough, they got benched, along with the far-too-expensive Groundshaker, and the Elvish Warrior, since Green was getting minimized.

Now his green cards were just some tricks, Wirewood Savage, Symbiotic Elf, two Barkhide Maulers and a Krosan Tusker. He was down to twenty-four cards. He almost wound up playing Strongarm Tactics, but only because he misunderstood what the card did. Run Wild took its place.

Talking about the draft, Okamoto admits to have made a number of mistakes. The first was taking Wretched Anurid over Barkhide Mauler. It was compounded when he took Krosan Groundshaker over Spitting Gourna, as evidenced by the Groundshaker sitting on the bench. He defended his choice of Vitality Charm over Shepherd of Rot, though, saying that with so many Anurids he didn't want to put his life total to a point where he could get Faltered out.

He wasn't delighted with how things turned out. He remained optimistic, positing a 2-1 finish with this deck. He refused to even consider a 3-0.