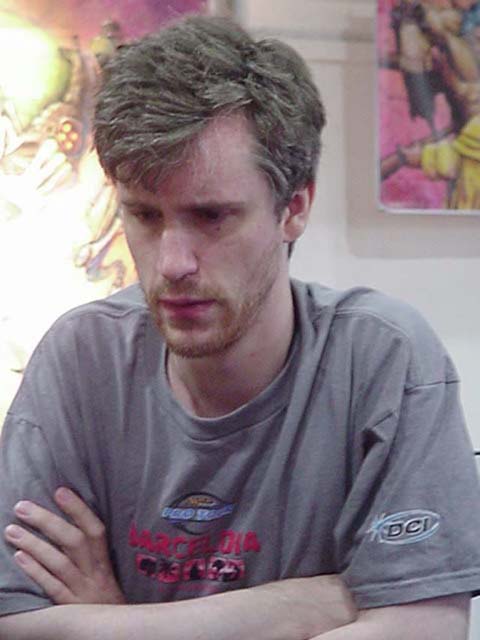 Long considered England's top drafter, John Ormerod had to feel somewhat confident coming into day two. With a 5-2 record in the draft portion almost ensuring a top 8 finish, JohnO knew that a strong showing in the first draft would take him a long way towards that goal.

John's draft started with the news that he'd be sitting in the coveted four seat. This is considered by many to be the best seat at the table as it allows you the time to figure out what your colors are before your high picks get to you, while being able to control the direction of the draft early on.

Pack one showed the direction the draft would go from the start. Raphael Levy, sitting in seat one took Faerie Squadron before Slovenia's Andrej Brglez took Canopy Surge. 16 year old German Champion Daniel Zink then took Ancient Kavu, leaving John the Invasion card whose value increased the most with the addition of Apocalypse: Harrow. John had to be pleased when Italian Claudio Negrini chose Restrain over Sleeper's Robe, showing a questionable understanding of draft strategy, and when he got Phyrexian Lens third from last, his status as a burgeoning five-color mage was solidified.

For the rest of the Invasion pack, thing went perfectly for Ormerod. After getting Tower Drake and Kavu Climber with his third and second picks, John opened one of the power cards he was looking for: Rout. Now settled into a green-white-blue base, John proceeded to get some amazing picks with the eight and ninth picks in pack five yielding Serpentine Kavu and Wax/Wane, the seventh and tenth picks from pack six being Shackles and Galina's Knight, the sixth and eleventh picks from pack seven being Fertile Ground and Razorfoot Griffon and the fifth pick of pack eight, amazingly, being Stormscape Apprentice.

With Zink settling into a heavy red-black deck in front of him and Negrini, considered one of Italy's best deck builders, doing the same, John had free range on his three-color base. In Planeshift, Finland's Antii Puurula would be taking John's blue and white, but he'd have two seats between he and the nearest green drafter, Thomas Andersson.

After getting Quirion Explorer in the ninth pack, John made a controversial pick, taking Amphibious Kavu over Hunting Drake, noting that he'd have problems with the Drake targeting his own creatures at times. John eventually got a number of powerful cards out of the second pack, amongst them being both Stormscape and Sunscape Battlemages as well as Strafe.

Things fell apart a little in Apocalypse in John's opinion, suggesting that he may have been underestimating the power of the two best commons in the set, Jilt and Coalition Honor Guard, of which he got one apiece. Unfortunately, despite his not playing blue or black up to that point, Andrej took a second pick Anavolver which would have filled John's deck out nicely.

In the end, Ormerod had to be happy with the overall results, and the finished product looked like this: