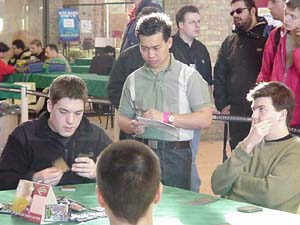 For this report, I mainly followed Kai's draft, with a bit of a sideline about Patrick.

Kai opened his first booster, which wasn't very promising. He had Aether Burst and Gravedigger to choose from. After some deliberation Kai decided to go with the Burst. Then came Irridescent Angel as a second pick, making clear what would be his choice of draft. Second Thoughts came. The fourth choice was quite difficult since it included Mystic Zealot, Chamber of Manipulation and Repel. Kai didn't want to pass Patrick Mello the wrong signal, but he had no choice, so Zealot it was. Patrick took the Repel and thought Kai let him go blue, which would make it difficult for both of them. Luckily Patrick decided to stay out of it, he had his deck set on green-black, with Squirrel Nest first pick, Caustic Tar third pick.

Kai filled out his deck with Testament of Faith, Healer, Embolden, Dreamwinder, two Graceful Antelope, Chamber (Kai was quite surprised when he saw the Chamber again).

At the end of the first booster Kai and Patrick were already having strong decks, as Kai's right neighbour was forcing red-green, with first pick Flame Burst. Sometimes this decision can be rewarded, but not this time.

Kai opened his second booster with Roar of the Wurm, Demise, and Shelter to choose from. He thought for some time about the option of splashing and decided not to. Consistency is key here and a good deed for your neighbour is appreciated everywhere. Then came Psionic Gift, a must for a slow blue-white deck.

The third booster didn't contain much blue-white, but offered lots of red goodies - Firebolt and Chainflinger were amongst them. Kai decided for the Chainflinger. His coming picks were a second Shelter, Lieutenant Kirtar, Syncopate, Dreamwinder, Abandoned Outpost, Phantom Whelp. Some deliberation again, this time between Mystic Visionary and Animal Boneyard. Kai decided to take the Boneyard to combat against slower decks (a sideboard card in other words). And two Pilgrim of Justice.

Patrick completed his deck as well with three Gravediggers, Patchwork Gnomes, two Afflict, Muscle Burst and Rabid Elephant. Patrick would need some luck from Torment as he only had 16 playable cards so far. Settling himself in black with Kai feeding him, his chances were more than fare.

Kai opened his Torment pack and couldn't believe his eyes, he saw Faceless Butcher, Grotesque Hybrid, Circular Logic. He could have picked the Logic to improve his deck, but the Hybrid however was too strong for his deck to handle, so he hate-drafted it. That of course gave Patrick his first Butcher (of two), which definitely went well with his first pick Chainer's Edict. Skywing Aven then joined Kai's flying force. He had the choice between Aristocrat and Mesmeric Fiend and once again decided to keep Patrick away from having a brutal deck, so he took the Fiend away. He wasn't too pleased with Patrick getting all good quality cards such as Centaur Chieftain (the mini Overrun when you have threshold), Anurid Scavenger and two Cabal Torterer. Kai's deck was of similar high quality though, with Teroh Faithful as his last card for the deck.

This was how table 1 drafted:

My prediction of this table is that Patrick and Kai will go 2-0 after the first two matches and the two will have to play each other to remain undefeated. As I am typing this round two had started with the two not paired against each other, which means my prediction could still come true. Raphaël Lévy's and Jelger Wiegersma's decks were as good, but in the long run I believe that both Kai and Patrick will overcome them. Raphaël and Jelger will have to fight for 2-1, and a good shot at the Top 8.