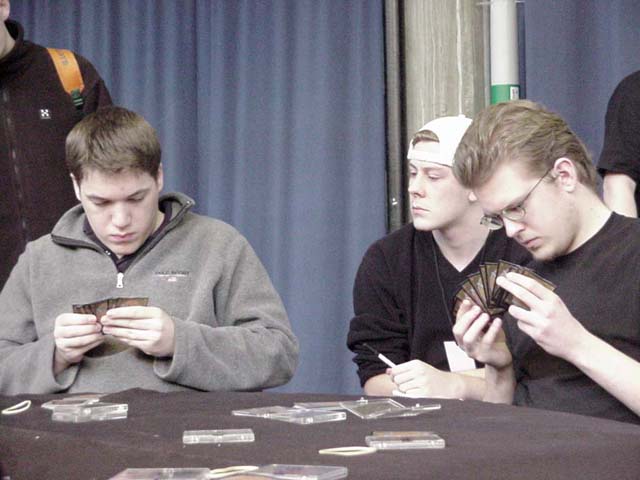 Kai went into this second day of competition without a loss, in fact he had seven straight wins. He was sandwiched between two lesser known players, but who had certainly proved their merit at Sealed Deck - Leif Malmi, and Albert Alshamn.

It doesn't take long for Kai to become unhappy, as his first booster is not very good at all. It only has Stormscape and Thornscape Apprentices, and no Black or Red cards to speak of apart from Soul Burn. He couldn't take the Soul Burn because it requires such a heavy commitment to Black, and he didn't yet know what Albert was playing.

Kai took the Green Apprentice, and Albert took a Scorching Lava. The booster that was passed to Kai was perhaps even worse than the one he opened. He could only take a Stormscape Apprentice, which unless he didn't play one of these first two picks, basically committed him already to three colors, and without the usual benefit of having powerful cards.

Finally Kai managed to find a decent set of cards to choose from, either a Llanowar Knight, Faerie Squadron, or a Kavu Climber. He could take the Faerie Squadron but this would set him heavily in blue, and he had already passed a booster to Leif where the best card was probably Stormscape Apprentice, so he must have been worried about fighting for blue with him.

He also got a Benalish Trapper from the next booster, but unfortunately for him, Albert finally took a non-Red card, switching for Nomadic Elf and it looked like Kai would be fighting for Green. This is one of the worst things that can happen to you in an Invasion booster draft, as the Green is almost never deep enough to support two consecutive drafters.

Budde still gets to choose between Galina's Knight and Shackles. He didn't yet have a single non-creature card, so he took the enchantment. This was certainly a good card in Invasion only, but it got worse when the addition of Planeshift brought Gating into the environment.

The German also managed to pick up a few more quality creatures before the end of the first set of Invasion packs - Treefolk Healer, Benalish Lancer, and Tower Drake.

To his left it seemed that Leif had a fairly weak black/red deck. His first pick was obviously the Yawgmoth's Agenda that he had, but after that he was passed little of any good. He second-picked the Soul Burn, and picked up a couple of Hate Weavers - but the majority of his cards are weakish creatures and he had a lot of off-color cards.

Kai was tempted to take an off-color card, and perhaps start working on a five-color green deck in the first pack of the second round. He has the choice of Breath of Darigaaz or Agonizing Demise, but decided to stay in color with an Armadillo Cloak.

He then took a Serpentine Kavu over a Harrow, and Explosive Growth over Wash Out. It's obvious that he wants to maintain a green base for his deck, even at the expense of not taking a Wash Out.

He got a second bite at the cherry on his sixth pick, with another Wash Out in the booster. Again he preferred to take a green card, this time a Serpentine Kavu. He was obviously looking to make sure he had a good creature base, but he would probably struggle to justify taking Benalish Lancer over Fact or Fiction, and he did indeed take the blue card this time.

It seemed quite unusual that he would have the opportunity of picking Fact or Fiction, but this was the only piece of luck that he had, and he got nothing better than a Harrow and a Strength of Unity from the rest of Invasion.

Kai was obviously unhappy with the quality of his deck at this point, and the first pack of Planeshift virtually forced him to pick a fourth color. The only cards of any quality were the red Magma Burst, and Thornscape Battlemage, which may as well be Red. He splashed for the Burst.

Kai second-picked Lashknife Barrier, but one of the reasons why it is bad to compete for green was demonstrated, since Albert took Nemata, Grove Guardian that Kai would obviously like, and left him with only an Alpha Kavu for comfort.

Luckily for him, Albert wasn't White as well, thus Kai got a Fleetfoot Panther. Planeshift wasn't kind to him though, as he got only Gaea's Might, and Pollen Remedy sixth and seventh.

Somehow he got an eighth pick Samite Elder, which is late for a card of this quality.

Kai seemed to get somewhat unlucky during the draft, but his deck really isn't that bad. He may have a lack of quality tricks but he has a pretty good selection of creatures, so he may do well. His deck probably isn't 3-0 quality, but he has a decent shot at 2-1.