After starting day one with a perfect record, and an incredible attitude Lenny Collins was looking like a good shot to make top 8. Seated in position one, one of the worst possible positions if not the worst, Collins managed to get the draft off to an incredible start by opening a Plated Slagwurm. Grinning like a fiend, Collins quickly slapped it down in his pile and watched as Trevilyan to his right took a Gold Myr over a Terror, which Jiang two seats down was more than happy to snap up.

The draft continued on its merry way with Collins picking up an Alpha Myr and a Tree of Tales for his wheel but then it looked like his draft could be teetering on a knifes edge. When there was nothing much left in the pack Nik Smith, who was feeding Collins, grabbed a late Creeping Mold and slowly began to make his way into green, forcing Collins to fight or get out.

Collins dabbled around over the next few picks, netting himself a Wall of the Nim, a Hematite Golem and a Leonin Scimitar, when Smith took a Tel-Jihad Chosen. It was going to be a choice from Smith that would plague Collins throughout the draft, especially when Smith grabbed a Tel-Jihad Archers in the next pack. To be fair the move from Smith was 100% correct, as he was getting several shots at green from his right hand side, and it was still early in the draft, Collins could have changed out and left the Slug in his board, even though its an incredible card. Rounding out the last pack Collins picked up a Myr Enforcer and prepared to get some healthy shots at green coming in to the reversed direction packs. 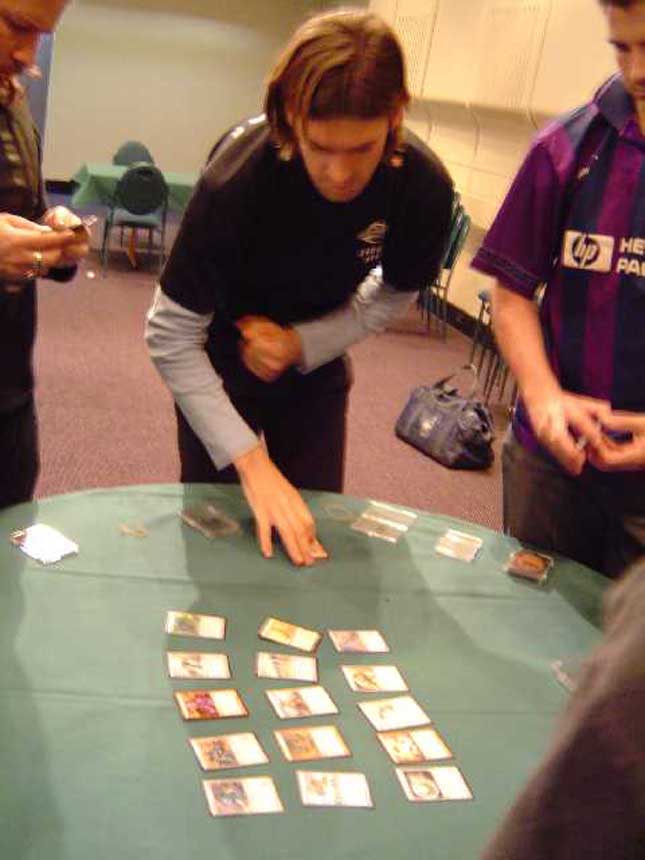 The second packs started at pick three for Collins when he got himself a Goblin War Wagon and another Tree of Tales, bringing his tally to three. He snatched a Goblin Replicator, explaining later that he had no artifact removal and that he thought he could get some nice picks at red, and a Bonesplitter. He got a Tel-Jilad Chosen and a Predator's Strike and made an interesting decision when his final pack contained a Looming Hoverguard. "I didn't want to have to play against that", explained Collins, "then I managed to get some Chromatic Spheres and a Somber Hoverguard anyway so I think the Hoverguard will end up being my MVP."

Paying close attention to his first round opponents draft, 8-0 Dan Turner, Collins was a little worried. "He has so many 1/X walls, I have to swarm over him before he could start laying down any fat."

In an effort to get more artifact removal he first picked a Turn to Dust in the final pack over a One Dozen Eyes. For the duration of the last pack he picked up some nice creatures and even a bomb for his deck, Rust Elemental, that he should have no problem sacrificing artifacts to. Overall Collins draft doesn't look too amazing but its not a totally awful deck. Had Smith not been a green made right next to him his deck would have been amazing, but that's the way that Rochester goes. We'll catch up with Collins in round two and see how he's doing.