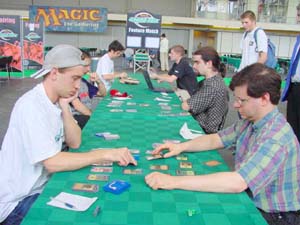 On one side we have: loud Ed Fear flanked by the taciturn Mike Pustilnik and Team Academy's own Andy Stokinger. On the other side of the table is old timer Raphael Levy, who has Franck Canu and Christophe Haim on his sides.

When the pairings went up the first thing Fear said was that they're probably the underdog in this draft as the French have more experience drafting as a team.

Magiccorporation.com wins the die roll and choose to receive, Ed Fear lays out the first booster and the draft is on the way.

Fear starts by taking Swat, leaving the Sparksmith for Stokinger, Canu picks a Symbiotic Elf, followed by a Dive Bomber for Levy. Haim takes Chain of Plasma after which Pustilnik wheels Searing Flesh and Charging Slateback. When the pack reaches Levy he goes for the Fallen Cleric, which would be the first of many Clerics he drafts. 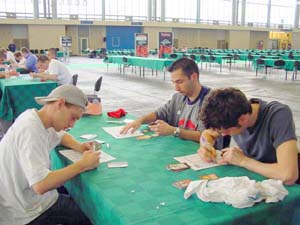 Stokinger opened the second booster and took the Ascending Aven going U/R, Fear got a Misery Charm to combat the cleric deck he assumed Levy was looking for. He was right as the cards for that deck were perfect with Levy getting a Cabal Archon and a Glarecaster from the next two boosters.

Canu was drafting an almost mono Green deck picking up a Krosan Tusker and a Snarling Undorak and some other pretty good green beasts in Onslaught. Pustilnik on the other end of the table was also green but picked up a lot more red cards on the way. Haim was blue/red, like Stokinger, getting solid picks like Solar Blast and Mistform Wall, also getting an off color Improvised Armor. Fear picks up another Swat for his W/B mirror match and a Profane Prayers still looking to cripple Levy and his clerics. Stokinger gets a Callous Oppressor and some Fever Charms to make Haim think twice about playing any wizards.

Pustilnik opens the first Legions picking up a Seedborn Muse, which will later be complemented by a Lavaborn Muse. Haim gets a Keeneye Aven from this Booster, picking some more white cards during the Legions packs to go with the Armor, but also getting an Imperial Hellkite. His dabbling in white made him pick a Wingbeat Warrior in front of Levy who also wanted that card for his deck resulting in some evil eyes between the two. Levy got a Smokespew Invoker from the first booster, and more playables for his Cleric deck in Whipgrass Entangler and double Daru Sanctifier. Legions was good to Fear as he got two Skinthinners for his black/white deck. Stokinger got some playable rares in Unstable Hulk and Weaver of Lies and Primoc Escapee is a pretty strong card as well. Canu's deck just got insane in Legions, two Canopy Crawlers to go with all those Onslaught beasts, a Timberwatch Elf, a Krosan Vorine and two Patrons of the Wild had Pustilnik shaking his head. 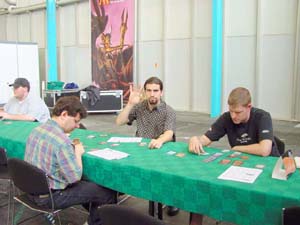 When the first Scourge booster was laid out on the table Fear picked a Putrid Raptor giving Stokinger his first of two Zombie Cutthroats. Fear also managed to pick up two Dragon Scales throughout the Scourge boosters. Stokinger got the Mountaincycler and a Dispersal Shield to go with the Cutthroats. Canu's deck was already strong but adding Forgotten Ancient and three Titanic Bulvox' made Pustilnik almost throw his cards in the bin before deck construction. Levy picked up Consumptive Goo and two Clutch of Undeath making sure he had enough removal. Haim drafting some white cards started to make more sense in Scourge as he picked up two Noble Templars. He also got a Rush of Knowledge and a Pemmin's Aura, which certainly made his deck. Pustilnik got a Wirewood Guardian and a Scattershot from Scourge but when he was about to open the last pack, Free Pat Chapin knew they needed some good cards for their decks to have a chance. Stokinger got out his "SAVAGE MISER" cap and Pustilnik laid out a Cutthroat for himself, a Decree of Justice for Fear and Pemmin's Aura for his Stokinger's deck. If that cap keeps working like that they might be able to win the whole thing.