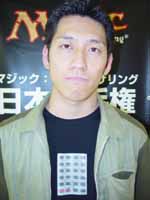 Masashiro Kuroda has a lot going for him lately. He won the Team Masters back in Venice which made him $20,000 richer, and today he’s playing in Japanese Nationals in his home city of Tokyo. Kuroda was a member of the Japanese National team back in 1999, and is looking to come to Berlin representing his country once again. So far, he’s on track, with a perfect record of 3-0. This should come as no surprise since Kuroda is considered a Constructed specialist, but it will be interesting to see how he finishes up the day after the draft rounds. This is not to say that Kuroda is a slouch at Limited either, as he is a strong player all around.

Masaya Kitayama opened the first pack, and it contained Gluttonous Zombie, Elvish Warrior, Gustcloak Harrier, Catapult Squad, Crown of Suspicion and Severed Legion. Kitayama took Elvish Warrior, which was the only good green card in the pack. Kuroda drafted Gustcloak Harrier, Nobuaki to his left picked Severed Legion, and Hideyuki Sugahara drafted Catapult Squad. This put a white drafter one space away from Kuroda, but he was on the right so it would hurt him less. Kuroda opened the next pack and it was terrible, offering two good green cards in Elvish Warrior and Spitting Gourna, along with Gluttonous Zombie. Kuroda couldn’t go green if he wanted to stick with white, and Shikata is his teammate, so he didn’t want to start a fight over black. So, the only option left was to take Commando Raid, which is a solid card for white/red, but certainly not something you want to first pick. In the third pack Kuroda got a great wheel of Piety Charm and Oblation, and things started looking better. Unfortunately, it wasn’t to be, as the packs contained very little in the way of quality white or red cards, and Kuroda ended up with playable yet unimpressive cards such as Gravel Slinger, Goblin Taskmaster and Goblin Sledder.

Legions, however, was a different story. Due to the Onslaught packs having an abnormal shortage of powerful red cards, Kuroda was able to clean up. He got a seventh pick Frenetic Raptor in the first pack, and in the second pack got another Raptor, along with a late Gempalm Avenger when the pack bounced back. He was presented with the option of taking Gempalm Incinerator or the deceptively powerful Defender of the Order, but opted to take the cycling direct damage spell. In the next pack, Kuroda was given a gift in the form of a third pick Cromeshell Crab. He wasn’t in blue, but the color is easily splashable for the bomb creature. If that wasn’t good enough, the following pack was absolutely loaded, containing Skirk Maruader, Gempalm Incinerator, Celestial Gatekeeper, Skinthinner, Corpse Harvester, Deftblade Elite and Mistform Seaswift.

Sideboard: So how do you think it went?

Kuroda: There were no decent white cards in the packs.

Sideboard: I noticed that. Especially in Onslaught, there were practically no good white cards and you seemed kind of frustrated.

Kuroda: From the beginning, I wanted to play white. So, I was hoping to get some white cards and for my first pick, the best cards were Severed Legion and Gustcloak Harrier. I took the white card.

Sideboard: The pack you opened in Onslaught was really bad for you, and you ended up taking Commando Raid. Why?

Kuroda: I needed some kind of removal. I was getting cut off in black, and realized that if I didn’t take something, I’d have absolutely no removal. So, it was a desperate attempt to get removal.

Sideboard: Red seemed underdrafted at your table because in Onslaught there weren’t many good red cards, and then that paid off well in Legions. You got two late Frenetic Raptors, and then some good removal spells. Were you trying to cut off red or did it just work out that way?

Kuroda: I originally thought Soldiers was the way to go and that’s why I drafted white, but that didn’t work out so well since I only got three. So, I decided to go with Goblins instead.

Sideboard: Three Gempalm Incinerators came around, which was ridiculous. The first time, you took it over Defended of the Order. Do you just think it’s a better card?

Sideboard: You had one pick where you could play it safe and take White Knight or Crested Craghorn, but instead you took Cromeshell Crab for a splash. You got that third, and the two players to your left could have splashed for the Crab, but decided not to take it.

Kuroda: The two people in front of me were building very solid decks in their colors, so I don’t think they wanted to splash for a third color.

Kuroda: That was a mistake, I should have drafted both Rangers.

Sideboard: After that, you took Chartooth Cougar over Noble Templar.

Kuroda: Well, rather than using it to get mana, I’ll just play it.

Sideboard: My thought was that there were a lot of Twisted Abominations at the table, and the Templar does a great job of holding it back.

Kuroda: Now that you mention it, yeah the plainscycling guy is probably better than the Cougar. I just took the Cougar, although I was thinking that I could take the Abominations as well.

Sideboard: Really? Dip into black just for those and go four colors?

Kuroda: When I saw the Abominations, I thought I could give up on splashing blue for the Crab, and play them instead, because there’s also Reaping the Graves, which would make a decent splash.

Sideboard: And then just give up on the Crab even though it’s a great creature?

Kuroda: Yes, but also Nobuaki Shikata is a teammate of mine, and he was to my left, and we were trying to be as cooperative as possible. A lot of my picks were motivated by the desire to make sure that Shikata got decent cards.

Sideboard: Any predictions? How do you think you’ll do with the deck?

Sideboard: Anything else you want to add?

Kuroda: I will do my best to not drop tomorrow.