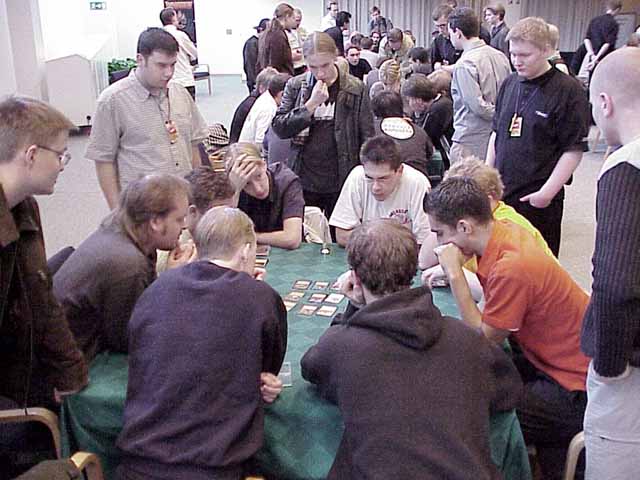 Noah's first 2 picks were 2 very solid black / red cards with a Hooded Kavu and a Shivan Emissary. Not prepared to fight Noah, Mattias takes a Ruham Djinn and a Serpentine Kavu, wanting to be the green white player, also passing a Turf Wound back to Noah as a gesture of co-operation. Noah, however, opened a Rout in his booster, and after deliberating for a short while took the Rout from Mattias. Mattias' deck was severely compromised by this, since Noah would now be looking to take some good white cards so that he could play the Rout. As the rest of the first round of boosters progressed, Noah's deck gained a Kavu Scout, a Benalish Trapper and Slimy and Ancient Kavus. Mattias opened a Shackles, and proceeded to take a Fertile ground and Quirion Trailblazer looking to open his 5 colour options, before picking up a Dueling Grounds, Kavu Climber and a Pincer Spider for Creatures.

In booster 2 it was Mattias' turn to be the 'Daddy' but because Noah was drafting R/B with an option on white, there were no cards that Mattias took that Noah would miss in his deck. Mattias drafted a Benalish Heralds, Benalish Lancer, Harrow and Kavu Climber, before opening a Death or Glory that was very relevant to his deck. Had he also had the Rout, his deck would have been brutal... Towards the end of the 2nd round of boosters Mattias picked up a Hunting Kavu, another Harrow, and hate drafted a Metathran Zombie since it would be a big problem for his deck to deal with. Noah took a Zap, Vicious Kavu, 2 x Pouncing Kavu, a second Benalish Trapper, a Phyrexian Slayer and a Mourning making his deck look very solid.

The third round of boosters saw Mattias take a Kavu Chameleon, Reckless Spite (which he was able to play), Quirion Elves, another Pincer Spider, Stormscape Apprentice, Benalish Lancer and another Harrow before hate drafting a second Metathran Zombie. Noah managed to draft his third Pouncing Kavu, a Scorching lava, Kavu Aggressor, Recover and 2 Urborg Volcanos, making his deck both powerful and consistent. Mattias 5cG deck looked to be able to post a reasonable 2-1 performance, while Noah's deck had 3-0 potential.