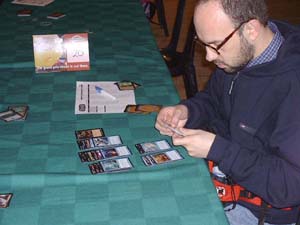 Miguel Folgado is part of a Spanish family of Magic players: his wife, his son and his daughter play Magic and they are one true play testing team.

This is the first day two for Miguel and he was a bit nervous during the draft, a format not too known to him he said, picks were too fast.

His draft was clearly influenced by opening the first Odyssey booster and finding a Psychatog. He decided to follow the route to success marked by two powerful colors without any splash: black and blue.

Being convinced that winning should be a matter of speed, he tried to catch as many cheap flyers as possible and any number of card drawing cards (that would feed the Atog twice).

From an outside perspective, his draft came out pretty strong, with the drawback of a clearly weak second booster (almost no useful black or blue but white and red). His deck seems to be consistent and he is one of the few players that counts his deck and records each color total. He will not have any deck check problems.

The draft followed this sequence: