This year's "PT Boat" opened with Boston's Mike Bregoli feeding Toronto's Gab Tsang at an impressive draft pod that also included Zvi Mowshowitz, Waiken Soo, and Joe Weber. Bregoli is looking for his 3rd Top 8 at this show, having previously made it to the big stage at PT London and PT NY 5. Gab "The Juggernaut" Tsang is legendary for his Limited skills on the money drafting circuit, and is the only person to finish first in the swiss at two consecutive Tours - PT NY 2 and Worlds 1997. Although the players don't know it yet, Bregoli and Tsang will be paired in round one, making it particularly crucial that they best one another in this draft. 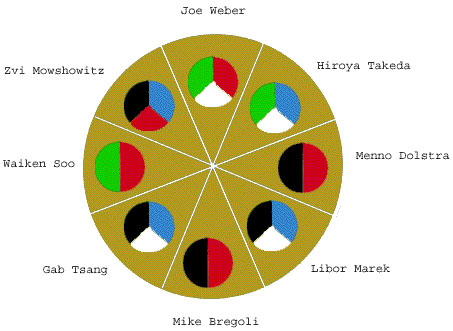 Starting at 12 o'clock, going clockwise, the table was:

As with most Rochester drafts, the tone of this table was set by the opening pack. Joe Weber opened in seat one, and was faced with a pack containing Soul Burn, Plague Spitter, Pouncing Kavu, and Razorfoot Griffin. Surprisingly, Weber first picked a Nomadic Elf instead, sending a very strong signal that he intended to be the table's green mage. Razorfoot Griffin went to Hiroya Takeda in seat two, followed by Plague Spitter to Menno Dolstra in seat three, and a 4th pick Tidal Visionary to Libor Marek of the Czech Republic. Bregoli's first card was a 5th pick Soul Burn, which established him in black/red. Tsang followed with a Wayfaring Giant, and, like the rest of the table, stayed true to his initial color signals throughout the draft.

Bregoli executed a very focused and powerful black/red draft. For a brief while, it looked like Libor Marek - one seat to his right - would try to cut off the supply of black. Marek chose a 2nd pick Phyrexian Reaper to go with his Tidal Visionary, suggesting he might go after the popular blue/black archetype. Had that happened, Bregoli would have been effectively shut out of black behind both Marek and Dolstra. However, to the good fortune of both Bregoli and the Czech player, Dolstra passed Marek a 3rd pick Rout! From that point on, Marek shifted out of black and into white, allowing Bregoli to settle into red/black relatively uncontested. Bregoli busted an Annihilate when it was his turn to open, and for the remainder of the first round of boosters, laid a solid foundation with a 2nd Soul Burn, Pouncing Kavu, Kavu Aggressor, and Kavu Scout.

The second round of boosters brought some interesting choices for Bregoli. The second pack found him face to face with another Soul Burn, Plague Spores, and Reckless Assault. Although many players would agree with Bregoli's choice of the brutally efficient Assault, this pick earned a small look of surprise from Mowshowitz, who got the Plague Spores on the bounce. An even bigger gesture of shock came from Mowshowitz when Bregoli opened his pack and 1st picked a Rogue Kavu over Halam Djinn and Cursed Flesh. Throughout the draft, Bregoli showed a preference for fast, brutal beatdown creatures over higher casting-cost alternatives. In addition to the first pick Rogue Kavu, Mike's draft was notable for picking Kavu Scout over Pouncing Kavu and Kavu Aggressor over Plague Spores.

As the third round of boosters fell into place, Bregoli's deck shaped into a classic red/black draft anchored on the strength of its removal. In addition to his 2 Soul Burns, Reckless Assault, and Annihilate, Mike's deck features Exotic Curse, Malice, Plague Spores, Zap, Agonizing Demise, and Shivan Emissary. He has assorted Kavu "dorks" to fill out his creature base, some early drops like Phyrexian Battleflies and Shivan Zombie, and a few higher end creatures like Duskwalker and Goham Djinn. He should be able to get in enough early damage to set up game ending Soul Burns, and otherwise control the board with creature kill. I predict him to go 2-1 or better at this table.

Tsang established himself in blue/white early, following his Wayfaring Giant with a Stormscape Apprentice, Tidal Visionary, and the extremely powerful Blind Seer. Blue/white decks frequently benefit from the addition of a third color, and it looked like Tsang would go green when he picked Charging Troll, Harrow, and Quirion Elves during the first round of packs. However, he stayed solidly blue white for the duration of the second round, drafting Quirion Trailblazer as his only additional green card. The most interesting shift of his draft came in the 16th pack overall, when he drafted a Phyrexian Slayer as his very first black card. At first, it looked as though the Slayer may have been a defensive draft, but the next few picks brought Tsang another Slayer and a Probe. Normally, switching colors that late in a draft is a difficult maneuver, but Tsang might be able to get away with it since black will be his tertiary color.

The highlights of Gab's deck are three tappers and two Shackles for creature control, the two Slayers and a Glimmering Angel for air assault, and defensive ground creatures like Benalish Lancer, Wayfaring Giant and Shoreline Raider. His only bomb (other than possibly the Blind Seer) is a Distorting Wake. Although Tsang is a talented player, I think he will have trouble with this deck since he is missing vital components of the blue/white archetype. There were no Faerie Squadrons in the entire draft, and Tsang was unable to get any of the table's Repulses or Excludes. I predict him to go 1-2.