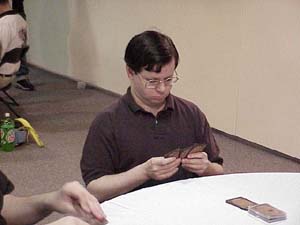 Thanks to his win at PT LA (the last draft Pro Tour) and his good Grand Prix season, Mike Pustilnik is currently leading the Player of the Year race. He went 8-0 on day 1 and found himself drafting at table 1 Sunday morning with Billy "Baby Huey" Jensen (two Limited Grand Prix wins and a Limited PT Top 8) feeding him and Matt Vienneau (Limited GP win, Limited PT Top 8) on his left. It's been a good year for "Doctor P" and he's hoping it's not over yet.

Pustilnik's first pack didn't have any bombs and he decided to take Repulse over Exotic Curse and Vodalian Zombie. Jensen, feeding him, opened a Darigaaz and his draft was pretty straightforward after that - he drafted black/red/green. Mikey P's second pick was easy - Faerie Squadron (over Shivan Zombie and not much else). Pack 3 was a tough one: Glimmering Angel or Undermine? With two blue cards so far, Pustilnik could go either way and, as he explained later, "I slightly prefer black/blue to blue/white." Thus he took the Undermine. I thought at the time that this was a mistake because he'd passed an Exotic Curse and a Shivan Zombie to Vienneau in packs that didn't have much else (and were especially dry in white). Of course, I was helped out by knowing that Jensen already had Darigaaz on his right and Vienneau first picked a Demise on his left, but even without that knowledge I think he should have known that white was more open than black on his left and taken the Angel.

Pustilnik's fourth pack gave him one of his beloved Ravenous Rats and then in the 5th pack things became much more clear: Galina's Knight, Shackles, Ruham Djinn, and Reya were all left while Phyrexian Battleflies was the best blue or black card. Pustilnik clearly saw the writing on the wall and switched into blue/white, taking Shackles from that pack. The next pack confirmed what was up and Pustilnik took Galina's Knight over Razorfoot Griffin. He then finished out the pack with a Riptide Crab and a pair of Ardent Soldiers (one instead of Tidal Visionary, the other instead of Wings of Hope and Reviving Vapors). That Glimmering Angel wound up in Brock Parker's deck, two downstream from Pustilnik. Parker already had a Charging Troll by then so letting the Angel go probably didn't create an additional white player, especially after the Razorfoot came around later anyway.

The second Invasion pack started reasonably well. He still didn't open any bombs, but you can do a lot worse for Blue/White than Exclude, Power Armor, Faerie Squadron, and Shackles. Things dried up quickly after that though. He D-drafted an Aggressive Urge so he wouldn't have to play around it and then took Dream Thrush over Tidal Visionary. Hanna, Disrupt, Opt, and Wings of Hope were all he got from the rest of the second round of packs. 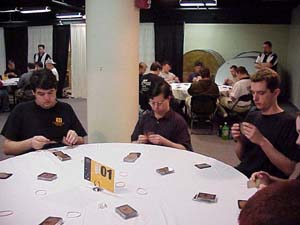 Pustilnik's first pick from Planeshift was Hobble (over Confound, Cavern Harpy, and Slay). His next pack also had Hobble, Confound, and Cavern Harpy. Pustilnik seemed to me to have the perfect Hobble deck - his Ardent Soldiers, Hobbles, and Shackles could stalemate the ground while fliers eventually won him the game in the air. However, Pustilnik was worried that he wasn't going to wind up with enough attackers and he still thought there was a decent chance he'd play black, so he took the Cavern Harpy. With just an Undermine and a Rat in his pile, I didn't think he was going black and in fact, the deck he finally wound up registering had no black in it. His next picks indicated that he may have panicked a bit as they gave him plenty of attackers: Sawtooth Loon (over Silver Drake), Aurora Griffin (over Confound), Silver Drake (over Hobble), Samite Pilgrim (over Aurora Griffin), and Disciple of Kangee. A late Stormscape Familiar rounded out a pretty good Planeshift pack for him.

In the end, Pustilnik clearly drafted the right deck. Jensen opened Darigaaz and drafted black/red/green the whole way and Mikey wound up in the other two colors - mission accomplished! However, I thought he made two mistakes and his deck could have just been better, with an additional Glimmering Angel and Hobble. (There were also a bunch of judgment calls, especially about the value of Shackles and Ardent Soldier where I am willing to defer to the good doctor.) All in all Pustilnik seemed happy about his draft. He's worried about all the Confounds that he saw go by and he wishes he had gotten at least one tapper, but he never saw one and his deck is solid.