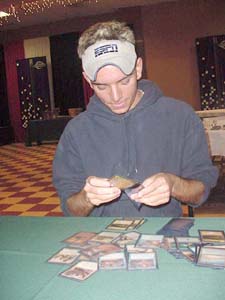 Pittsburgh's Nick Eisel, known in Magic Online as #1 rated "ThatsGameBoys," ran the table in sealed deck yesterday, ending up as the top seed going into today's draft rounds. And what does he get for his troubles? The "Pro Tour Squeeze": a seat between GP Copenhagen champ Bob Maher and feared drafter William "Baby Huey" Jensen.

Even though Onslaught isn't part of the Online game yet, Eisel has been getting plenty of practice with the paper cards drafting with Mike Turian, Eugene Harvey, and the rest of the CMU posse. He'll need edge he can get to walk away with some wins at this star-studded table:

The one seat is usually at the mercy of the eight seat, but everyone at the table knew Gab and Igor were friends from way back, so they'd keep the fighting to a minimum. So when Igor first picked a Cruel Revival, it was a given he'd be black. Frank followed with a Krosan Tusker, Krempels took Gravespawn Sovereign, and Huey Erratic Explosion.

With no one signaling white, Eisel took Daunting Defender. Bob signaled red with a Dwarven Blastminer, Haim black with Spined Basher, and Gab blue with Imagecrafter and Disruptive Pitmage.

With the people in front of his sticking to their colors in the next round of picks, Eisel decided to do so as well. He took True Believer (a 2/2 that "does nothing," in the words of Jensen) over another Daunting Defender. Bob went into green with a Symbiotic Beast, and Haim got the Defender, which started him in on black/white Clerics.

Huey had picked up a few junky blue cards to go with his red early, and that's why Maher went into green so quickly. But Huey took a Barkhide Mauler third, which meant Eisel would be sandwiched between red/green drafters. He stuck to white, picking Daru Healer, Improvised Armor, and Whipcorder in the next few packs.

His original plan of being black/white Clerics wasn't looking great: both Frayman and Krempels were heavy black, and Haim had staked out black/white as well. Seeing that Gab was the only blue drafter at the table, Eisel decided that color might be his best option, taking a Screaming Seahawk and a Mistform Wall at the end of the first set of packs. By doing so, he gave in to Haim, passing him Fallen Cleric. Frayman had also quietly been picking up Clerics as well, and had a pair of Daunting Defenders himself.

All of this made Eisel's choice of Cabal Archon in the ninth pack quite odd (read as "terrible"). He took it over the 2/3 flying Gustcloak Skirmisher, a card that is great in any white deck, when there was no way he was going to get significant black.

Haim opened the 10th pack, and chose Goblin Sharpshooter out of the clear blue, obviously just to hate Maher. Maher shook his head in disbelief and settled for Shock. Luckily for Eisel, Bob didn't feel the need to continue the chain of evil, and took Solar Blast from pack 11, shipping Eisel the bombtastic Exalted Angel.

Nick, however, was feeling evil, or at least greedy. He opened pack 12 and saw Dive Bomber as the best white card, and took... Slice and Dice. Huey's neck reddened. The pick seemed even crazier once Nick went back into blue, wheeling Riptide Biologist and Ascending Aven in pack 13. It looked like he was all over the place.

The rest of his picks from the second batch of packs were white and blue, including the hefty Mistform Mutant. It looked like Slice and Dice would indeed be on the bench.

Huey felt the need to be vindictive, and snatched a Whipcorder from Eisel out of spite in pack 18. But when he opened Wirewood Savage and Aven Brigadier two packs later, he had to give Nick the big flier, as the Savage is too important in red/green. In the next pack, Eisel's best in-color choice was Glory Seeker, but he balked on the bear and took Solar Blast, much to the chagrin of Maher. The rest of his picks were all blue and white, and it looked like he had to be three colors. 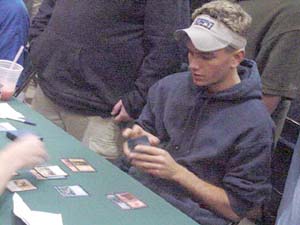 After the draft, Eisel defended most of his choices. The True Believer was the right pick over the Daunting Defender, he said, because you need a curve. As for Slice and Dice? "I don't believe in playing the format without removal. I just won't do it; you lose to too many dumb things. So I had to take it." The Archon pick, however, was undefendable. "I'm angry about one," Eisel lamented.

Eisel's deck ended up being mostly white with a few blue cards, and Solar Blast and Slice Dice tossed it for removal's sake. There is no doubt he has powerful cards, and should do well if they turn up. I expect a 2-1.

Huey and Maher were not impressed. "Now that I got to draft next to Nick Eisel, I can see how bad he really is at Magic. Every pick was wrong, just about," said Huey. They then went off about how Haim (who hated the Sharpshooter) and Krempels (who made such picks as Screeching Buzzard over Whipcorder) made the draft environment difficult as well. "Yeah, we thought Eisel would be in the Pro Tour sandwich," laughed Maher, "but we [Huey and I] ended up as the meat in the Idiot Big Mac."

The clear winner at the table was Gab Tsang, who had a near-monopoly on blue cards. To go with his horde of Wizards (including Voidmage Prodigy), he has four screaming Seahawks and three—count 'em—Lavamancer's Skills. Anyone that wants to 3-0 the table will have to go through Gab.