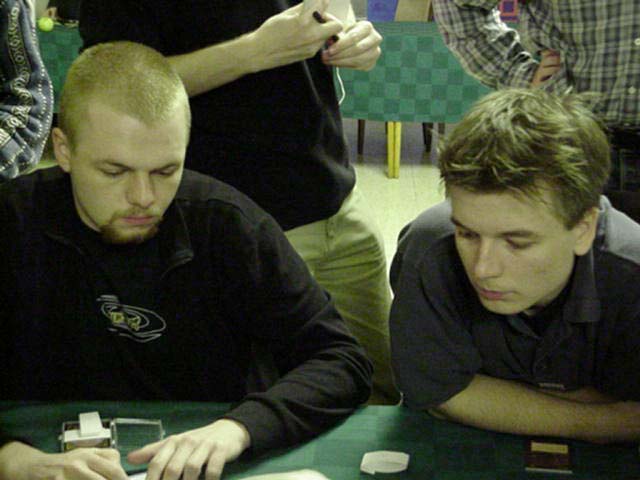 The top table at the start of the second day had a lot of unfamiliar faces. The power of Overrun and Shower of Coals gave lots of previously unknown competitors a great start to this event. This highlights one of the problems of Odyssey Sealed Deck - Overrun and Shower of Coals are the two best uncommons, but they also appear together in Sealed Decks as they are close in the print run. This makes some packs much better than others. Of course, all the players in the first pod have built and played their decks exceedingly well to make it to such a good score.

The two better known players at this table, Nicolaï Herzog and Gabor Papp, were seated next to each other. The other players were Marc Tschirch, Martin Grimm, Oliver Braun, Mario Zemke, Damien Reaubourg, and Stephan Meyer.

Herzog had done a few drafts and had a preference for white-blue, with hopefully a splash if red as well. By Gabor's own admission he doesn't know much about the format, and yesterday was his first time playing with Odyssey cards. Nicolaï was opening the first pack, and passing to Gabor.

It wasn't a very strong pack by any standards, and Herzog took Firebolt, by far the best card. Gabor took Krosan Archer. His pick seemed to be a choice between this and Dusk Imp. Seated to Nicolaï's right was Stephan Meyer, who took two red cards on the wheel, but this wasn't a real problem for Herzog as he envisioned the red as a splash only.

Gabor opened pack two and had to choose between a Stone-Tongue Basilisk and a Sylvan Might. Gabor explained, "I think the Might is the better card but by taking the Basilisk I was hoping to signal that I was definitely playing green and maybe deter other players close to me from playing green."

After his Firebolt, Nicolaï didn't get a further chance to pick any red cards - they were all being picked by Stephan to his right. His chance to get more good red would hopefully come in the second set of packs where the cards were coming from the other direction. In the meantime he started to pick up on white-blue. He got a nice gift in pack four, as Damien Reabourg chose Pilgrim of Justice over Kirtar's Desire. Herzog was more than happy to take the Desire, especially with an Auramancer in his deck.

Gabor started to pick black cards as the most readily available second color. This is fine but black-green has less synergy than most of the other color-combinations. It's preferable to be green-blue or green-red if at all possible. Going into the second set of packs, Gabor had Krosan Archer, Stone-tongue Basilisk, Refresh, Crypt Creeper, Diligent Farmhand, Sadistic Hypnotist, Krosan Avenger, Dirty Wererat, and Whispering Shade as his best cards.

Herzog was doing slightly better having managed to pick up a Flame Burst and a Balshan Griffin among others. In pack eleven Gabor made another debatable choice taking Krosan Avenger over Childhood Horror. I say questionable since his deck wasn't the archetypal green-red Mad Dog, Krosan Avenger beatdown deck. However he thought that he would get enough four mana plays, and wanted something else to play for three mana. Unfortunately this turned out to be the only flyer Gabor would have access to in this draft.

Nicolaï's deck turned out just fine. He was short on creatures and so had to take Pardic Firecat and Pilgrim of Virtue higher than one might like, but he had plenty of tricks. Two Kirtar's Desires and two Second Thoughts complemented a decent amount of burn, and he had some big flyers like the Griffin and Aven Windreader.

Gabor's deck was less good. None of the cards in it were bad, but there was little synergy in there and he had a horrible problem with flyers - apart from his two Krosan Archers. The possible exception was Last Rites. He played this mainly because of the three Overruns that were around the table - none of them made it into his deck unfortunately. Some people didn't like the Rites when Papp explained this, but it is a good way of dealing with dangerous cards. It would have been much better if Gabor had some Threshold cards, as it activates these sooner.

Nicolaï's deck looks to me like a 2-1 deck, and I think Papp would do very well to win two matches with his.