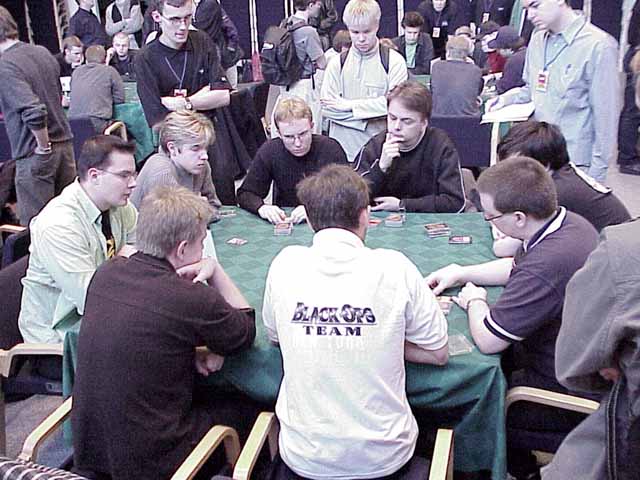 These players found themselves sitting at table two at the start of day two here in Helsinki. Seating within the pod was random and Jens got the unlucky position of seat one, which is typically not a favourite position amongst most players. Zvi was sitting to Jens' right in seat eight, and Oyvind to Zvi's left in seat seven.

The first booster wasn't a particularly spectacular one for Jens. He picked an Ancient Kavu with Tower Drake, Kavu Aggressor and Duskwalker the other possible alternatives, thus signalling his preference for red. Oyvind was able to take an Attendant seventh pick, whilst Zvi had no real playable cards and so wheeled Capashen Unicorn and Vodalian Merchant in an attempt to signal his preference for White-Blue.

The second booster gave Oyvind a Zap, Zvi a Tidal Visionary and Empress Galina and Jens a Stun and a Llanowar Cavalry. Whilst not great picks the colours that were chosen at this point seemed to imply the players would draft cooperatively. Oyvind had other ideas however and switched into blue after a Recoil and a Probe came his way over the next two boosters. Zvi could only shake his head as he is forced to take inferior blue cards for his deck.

After a Sulam Djinn, a Shivan Oasis and other red cards Jens started to look settled in his colours, but then he too switched into a third colour taking Goham Djinn over an on colour Puncing Kavu.

Zvi picked up a Duskwalker and a Wings of Hope and was still looking like either going blue-white or blue-black. Ovvind busted a Tsabo's Assasin out of his booster forcing him deeper still into black whilst Zvi picked up a Stormscape Apprentice and looked like settling into three colours.

Zvi's decision top go three colours was solidified for him when he amazingly opened up Dromar the Banisher, probably the best card possible for him at that point in the draft.

After the first round of boosters Oyvind looked like being blue-black-red with Zvi blue-black-white and Jens red-green-black.

Zvi opened well in the first of the second set of boosters and was able to take an Agonising Demise to give him some much needed removal. Oyvind picked up solid creatures in Skizzik and Halum Djinn and looked like he might move out of Blue and ease the pressure on Zvi for the third round of boosters.

Through-out this round of boosters Jens moves gradually out of green and more into black as he picks up a Soul Burn and an Agonising Demise which meant that Zvi's colours were now getting heavily attacked from both sides. Zvi was able to pick up a second Stormscape Apprentice and a Fact or Fiction which were his only real highlights from the second round of boosters.

With Oyvind settled into Black-Red with a splash of Blue he proceeded to unnecessarily screw over Zvi in the first of the next set of boosters. He had Hooded Kavu and Scorching Lava still amongst his possible picks but instead chose to take the Recoil leaving Zvi with no playable picks. Zvi, obviously not happy at this pick proceeded to take both the Kavu and the Scorching Lava which meant that Oyvind only received one playable card instead of the two he would've gotten if he'd chosen to cooperate with Zvi.

Jens' deck solidified quite nicely at this stage as he was able to pick up all of the good red cards that Zvi let through in addition to grabbing some decent green including a Thunderscape Master.

Zvi's rounded out his final picks with a Duskwalker and a Tower Drake to give him some added Evasion and a Stormscape Master for some brokenness. It could've been a lot better for him though as Oyvind took two Faerie Squadrons away from Zvi whilst putting gthe final touches to his three colour deck.

With all players playing three colours Zvi definitely had the worst of it seated between them. There was little he could do about Oyvind's move into Blue or Jen's move into black however, and could only accept his fate as the draft progressed.

The mana-base of all three players is pretty scary with all of them playing double-coloured spells in at least two of their three colours. With other sections of this pod cooperating much better it will be interesting to see if any of these decks can rise to the top. It looks unlikely but stranger things have happened in the game of Magic.