Going into the pod Szigeti had little idea what to expect, as he knew none of the players who were drafting at this table. He had spoken to a few locals who had told him to expect the unexpected when he sat down, but that really doesn't give you much of an idea about whos feeding you. Szigeti admitted after the draft that he was in fact looking to draft the colour combination that he ended up with, but unfortunately not quite this style of deck. 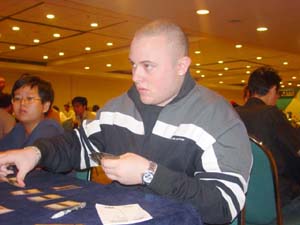 When you have no idea whats happening on either side of you one of the best ways to over come it is to just open a nice rare and that's exactly what happened. After tearing open his first pack Szigeti found Jareth, Leonine Titan staring back at him. He flipped through the rest of the pack to see if there was anything else of interest, finding a Shock and a Primal Boost but they weren't even close on his grand scale.

Sliding the Jareth onto the table gave him the first half of his preferred colour combination, now if he could only secure the second. As the second pack came around he thumbed through with only two cards catching his eye, Swat and Barkhide Mauler, but there was no real decision to be made there, with Swat making the cut. Grabbing two Glory Seekers out of the next two packs Szigeti looked to be setting up a cute little white black deck, although he admitted that he would have rather been drafting the cleric version of the deck.

A 5th pick choice between Riptide Shapeshifter and Gravel Slinger gave him the first real option of the draft, and he decided to keep his options open, sliding the Shifter into his stack of cards. From here he picked up a Voidmage Prodigy, something he later regretted as he took it over a Glory Seeker, which would have been perfect in his final deck. Szigeti sighed as he recalled the situation, "I left it too open in the first pack" he explained, citing the way he was drafting both black and blue cards without settling on a second colour. The final significant picks of the first pack were a Sage Aven and a Crown of Suspicion.

Going into the second pack Szigeti was still largely undecided on his second colour, although he was favouring black due to his recent draft experience. He picked up a first pick Daru Lancer in an otherwise lifeless pack for his colours, and then took a Pacify over an Aven Fateshaper for his second pick. "I don't regret doing that", he began by saying but then corrected, "well I mean after the end of the draft I guess it wasn't the best but eh...." he trailed off, but he was right, its impossible to know what's going to be coming later on and he was already sealed on white.

He scooped up a second swat over a Glory Seeker, looking for some form of removal to help him force through damage in the early turns, and grabbed a Severed Legion over a second Riptide Shapeshifter sealing himself into W/B. Unfortunately for Szigeti the picks quickly fell away, and all he could pickup was a Piety Charm, a Headhunter and a Daru Healer. Going into the final pack of Legions he needed some real gas to round out his deck.

Skinthinner wasn't a bad way to get the ball rolling in Legions and he followed it up with a Stoic Champion, giving him more speed. White Knight was next onto the pile and he picked up the first of four Gempalm Avengers in the next pack. He looked puzzled as an Echo Tracer slid by him, and then even more puzzled as more and more kept coming his way. "I guess that theres noone really playing blue so it doesn't matter", he reasoned, "I mean theres really not much you can take over those guys if you are blue, especially that late." He rounded out his deck with another Stoic Champion and the rest of the above mentioned Avengers.

Szigeti had one final comment on his draft, "I really have no idea what my deck is going to go I mean it could be 0-3 or it could be 3-0 but I really doubt that, I just need to draw Jareth or I have no real way to finish em off. I'll be happy with 2-1. I guess I can do that."