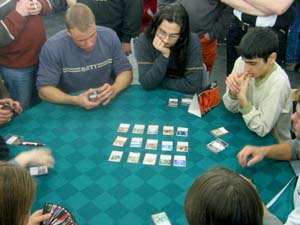 Almost everyone complains about the random element involved in Sealed Deck, as well as the grueling 9 rounds of swiss. However, a closer look at every Day 2 of Grand Prix, seems to find always the same players, like Antoine Ruel and Gabriel Nassif at the second Pod. These 2 were drafting almost at one another's side, Ruel was seat 1, Nassif seat 3, so we took the opportunity to watch and learn how the Frenchmen draft Mirrodin.

Things got underway with a tough decision that would have a large impact for the rest of the draft. There were 2 obvious first pick cards: Shatter and Bonesplitter. What common wisdom tells us is that when you're in the seat 1 you try to avoid color commitment or at least be flexible on your first picks while you're studying the draft and positioning. But Antoine Ruel took the red gambit on Shatter making an easy pick for seat 2, Hannes Scholz, in Bonesplitter. Gabriel Nassif on the 3rd seat picked Tel-Jilad Exile.

In the next pack, Ruel was wheeling 2 cards, one of them being Muriok Scavenger. He set himself on Black-Red and never look back from here. For the next packs he just grabbed some cards like Krark-Clan Grunt, Disciple of Vault, Iron Myr, which isn't bad since he was making the last picks from those Boosters. He was solidifying his position for the next Boosters where he would make the early picks.

In the last 3 packs of this direction, Ruel was picking in 4th, 3rd and 2nd, which should've give him some good quality picks. He got an Irradiate from the Booster where he picked in 4th. But in the next one, where he was the 3rd to pick, seat 7 Christian Fehr who was also drafting Red opened Arrest and Electrostatic Bolt, choosing the white card. The bolt was picked by the next player and Antoine who was forced to take a Gold Myr. After that, the player who took the Bolt from Ruel opened his pack and drafted Arc-Slogger. A new red drafter was born, making a row of 3 red drafters, Antoine Ruel being the third.

Meanwhile, Gabriel Nassif was having a quieter draft. He was well positioned for Green/Red between Hannes Scholz drafting Blue/Affinity and a Blue/white drafter. He picked good green cards, like Fangren Hunter, One Dozen Eyes and Deconstruct to follow his Exile, and added some red to the mixture with Goblin Replica, Leadfoot Ogre and Talismann of Impulse.

In the middle of Ruel and Nassif, hometown player Hannes Scholz looked in really good shape after the first set of boosters, with his Blue Affinity deck that already had Bonesplitter, Wizard Replica, double Somber Hoverguard, Myr Enforcer, Thoughtcast, Sun Droplet and Copper Myr. Not bad with only 1/3 of the draft.

If Ruel wanted some red cards, now it was the time for it, since the direction of the draft changed and he would pick before the other 2 red mages next to him. Curiously, the draft composed a little for Antoine, filled mostly with black cards. He started to wheel another Muriok Scavenger and a Nim Replica. For the next packs, he could only draft Black cards, but at least they were decent ones. He got Barter of Blood, Nim Devourer, Nim Shrieker, Pewter Golem (over a Consume Spirit). Finally he saw Red cards in the last 3 packs, those where he would pick 3rd, 2nd and 1st. In that order, he got Goblin Replica (pack opened by Nassif drafting Green Red), and Granite Shards. Things got interesting when he opened his own pack. It contained Pyrite Spellbomb, Skeleton Shards, Isochron Scepter, but everything became easier when he revealed his rare: Arc Slogger.

Nassif was having the same problem about the lack of red, since it was being overdrafted, but just like Ruel, he drafted cards from his other color, occasionally grabbing a red card here and there. Right in the beginning of this set of boosters Nassif picked a Silver Myr over a Viridian Longbow. He followed that with Tel-Jilad Archers, Wurmskin Forger, Tel-Jilad Chosen. His only red card picked was Rustmouth Ogre.

During this second part of the draft, Nassif was presented with few choices. He was already positioned and there weren't many Green or Red cards in the packs, so he kind of auto piloted here in cruise mode.

The Booster he opened first contained one of his few difficult decisions during this second set: Goblin Replica, Myr Enforcer, Vulshok Gauntlets were left in the pool as he opted for a second One Dozen Eyes. Until the end of this serie, Nassif wheeled a Leonin Blade Drop, which would turn out to be his only Creature removal.

If the Red drafters were having troubles, the opposite was happening with the Blue ones. There were only 3 of them, and the decks of Hannes Scholz and Ruud Warmenhoven (seating on the other side of the table) were looking pretty nice. Scholz's deck was starting to look like an Affinity deck from Standard, and Ruud Warmenhoven's Blue Black had some removal and 2 Domineers at this point.

The final part of the draft started once again with Antoine Ruel opening his third booster to first pick. Expectation was high, and even his brother Olivier Ruel was excited to see what goodies Antoine would open. A few seconds after, Olivier just patted his brother shoulder and left. Vulshok Berserker first pick is not what someone could define as exciting. He got a good wheel next, with Muriok Scavenger and a rare equipment that gives +1+1 for each swamp, pay 3 to equip. Immediately after he picked a Great Furnace and some black cards - Slith Bloodletter, Irradiate, Woebearer.

His draft ended in a frustrating way. In the 23rd Booster of the draft Christian Fehr opened Bosh, Iron Golem for him. The other red player before Antoine took Goblin Replica, and Antoine was left with Great Furnace. In the last pack, Ruel got a Pyrite Spellbomb, only because the Booster had an Electrostatic Bolt, drafted before Antoine.

For Gabriel, however, the final part of the draft wasn't nice to him. Gabriel drafted 3 mana Myrs plus another Talismann. That left him very few picks for other cards. He still got a Predator's Strike, Shatter, a second Wurmsking Forger and a Lightning Greaves, but the packs refused to cooperate any better. 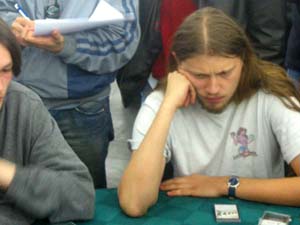 Antoine Ruel: We've seen much better black red decks in Mirrodin, but everyone also saw much worse. His deck has the traditional formula of some not very expensive guys that attack while the removal clears the way. He has 2 Irradiates, 1 Pyrite Spellbomb and 1 Granite Shards. Antoine still thinks the Shatter was a good pick despite being cut of red, because in his opinion, Shatter was the best card in the pack, and he was always going to play it, even as a splash.

After the draft and deck building, I looked at Antoine's deck and I think he is capable of a 2-1 record with his deck, which should keep him in contention of another Top 8, but maybe Antoine doesn't agree with my opinion.

Gabriel Nassif: Gabriel's deck really needed the mana acceleration, that's why he drafted so many off-color Myrs. When I checked him during deck building he was considering playing with 4 mana myrs, 2 Talismann and 1 Viridian Joiner, to accelerate into the creatures that will win him the games: 1 Fangren Hunter, 1 Rustmouth Ogre, 2 One Dozen Eyes, 2 Wurmskin Forger. If he manages to play one of his big guys early, he's in a very good shape. His deck has the possibility, for example to have a turn 4 One Dozen eyes followed by a turn 5 Forger. However, the deck is lacking in creature control. Gabriel has no burn spells. The artefact ones at least he can have a chance to get rid of them with 1 Deconstruct, 1 Shatter, 1 Goblin Replica. With all the respect, it seems a 1-2 deck, but maybe he can prove us wrong.

Ruud Warmenhoven: Being one of the few Blue mages, Ruud got a pretty solid deck. He has at least 2 Iradiate, 1 Consume Spirit, 1 Terror and 2 Domineer. He also have Vedalken Archmage, Skeleton Shards and 2 Myr Enforcer. After the draft, my opinion is that it seems a solid 2-1.

Hannes Scholz: I won't say too much, I'll just list some cards: 3 Myr Enforcer, 1 Broodstar, 1 Thirst for Knowledge, 2 Annul, 2 Bonesplitter, 1 Domineer, 1 Frogmite, 1 Thoughtcast, 1 Welding Jar, 2 Ancient Den, 1 Seat of the Synod, 2 Somber Hoverguard at least. It looks familiar to me. Joining these cards that look like a Standard Affinity, he also has regular limited good cards suchs as a couple of white fliers. We all know that lots of things can go wrong in Magic, but it's a deck that has a good chance to 3-0.

Christian Fehr and Mikal, the red players before Antoine also have solid decks, so it worked out for them fine. They have a word to say in this draft for sure, and it is very likely that they will ruin my predictions.