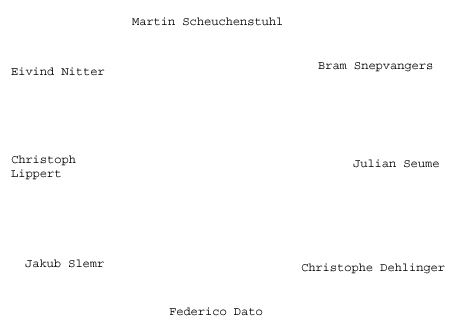 The Seating for Pod 3

Martin had the unfortunate task of starting this draft: 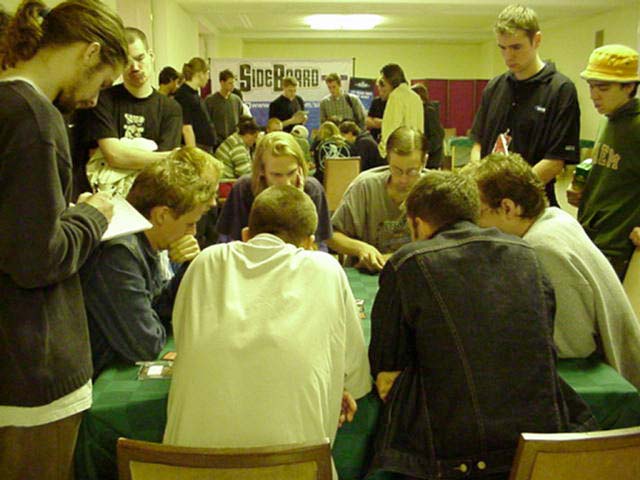 As might be expected, each of these players then went on to play their respective first pick colours. The interesting decisions in this booster were in the early picks: Despite green tending to be the preferred colour in Sealed Deck, the players at this table were painfully aware that it could easily get over-drafted. As a result Martin chose to go black in first position as it is hard to force an over-drafted colour from there. Then Bram also chose to take the blue card over the Nantuku Disciple. This was understandable as a lot of the top Pro Tour players have taken a heavy preference to playing blue cards in this draft format.

I guess my only query from this booster was the Acceptable Losses. Either Julian knows something I don't, or that was a misguided pick that should probably have been either the Barbarian Lunatic (better red card) or Shelter.

I was not sure if there was just no card strong enough for Dato to not hate the Angel at this stage. Maybe he thought he might move into one of blue or white and then splash a third colour for the Angel, but I think I would have taken the Werebear here.

Amazingly Julian managed to wheel a twelfth pick Lithatog when there was very little else in the booster at all.

So, after one round of boosters these were the colours the players adopted: 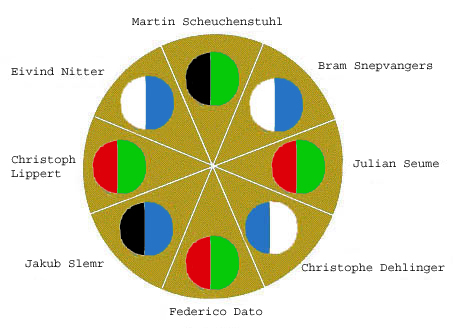 As expected there were alternate green players at this draft table. It came as no surprise that there were alternate blue players here too. Julian was well positioned for red cards on this table, as was Eivind for white, but the only colour only drafted by two players on the table was black, which Jakub was very well seated for.

This booster was stunning, as nobody chose to hate draft a Morbid Hunger, that made it back round to Jakub Slemr as a thirteenth pick! That card was a bit of a life saver for the former World Champion, as his deck, despite being only one of the two black decks on the table, was looking very thin at this stage. Notice how few good picks he had in the second set of boosters.

The first booster was intriguing though, as Martin Scheuchenstuhl chose to take a Rabid Elephant over a Painbringer, which managed to find its way to Jakub.

The only other noticeable incident was when Lippert hate drafted a Syncopate from Nitter, the European Champion had to make a panic pick and missed a Sphere of Reason, which was a very powerful card on the four blue player table.