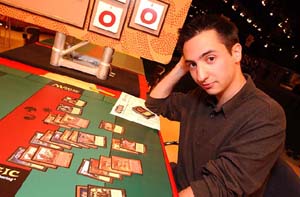 Levy may be relatively young, but don't let that fool you- he's one of the Pro Tours most accomplished veterans. The Frenchman made Top 8 at Worlds back in 1998, and had a Top 8 at Chicago 99 with a deck that sported, among other things, Fire Whip/Quirion Ranger technology. Yesterday he ran his somewhat unconventional green/blue threshold deck to a 5-1 record, and sat down at the draft table today in prime position to make a run for another Worlds Top 8 four years after his last one.

The first pack contained Flame Burst, Gravedigger, Syncopate and Second Thoughts as viable picks. Despite the fact that Gravedigger and Second Thoughts provide card advantage, Levy decided to force red and took the Flame Burst. Since red is generally considered to be the weakest color in Odyssey Block draft, this was a calculated risk. Levy was hoping everyone else would avoid the color, and it certainly paid off. Chainflinger came second, Patriarch's Desire third, another Chainflinger fourth and a second Flame Burst fifth. Last Rites, Innocent Blood and Fledgling Imp rounded out Ruel's black as he headed into Torment.

With Torment came a first pick Grotesque Hybrid, and a second pick Chainer's Edict, which has great synergy with all of Levy's burn. The rest of Torment didn't provide any Crippling Fatigues or Faceless Butchers, but it did give Levy two Pitchstone Walls, Cabal Torturer, two Barbarian Outcasts, and a sixth pick Fiery Temper. Obviously, Levy's red gambit had worked. Judgment wasn't particularly exciting, but then again you can't expect much in the third pack if you're black/red. Toxic Stench was taken first pick over Anger and Treacherous Werewolf, and Filth was picked second over Lava Dart. The rest of the picks gave Levy some 2/2 creatures for three in Treacherous Werewolf and Barbarian Bully, in addition to Sutured Ghoul. It is interesting to note that Levy never really considered taking late Goretusk Firebeasts, and went so far as to counterdraft Web of Inertia over one. The Firebeast is not exactly a "platinum hit" but it often works well in an aggressive black/red deck.

Sideboard: How do you think it went?
Levy: I think it's fine. I like this kind of deck; red/black. I drafted it at Euros (European Championships) and went 7-0.

Sideboard: So you were looking for red/black from the start?
Levy: Yeah.

Sideboard: It worked out well, you got some really good red stuff late.
Levy: Yeah, I got that Fiery Temper sixth pick. That was a nice surprise.

Sideboard: Are you going to play both of the Pitchstone Walls?
Levy: Probably. I'll see how many cards I have.

Sideboard:Judgment wasn't quite as good, but then again you're playing black/red, so you can't expect much.
Levy: I had twenty playable cards after Torment, so I was just expecting Bullies and Werewolves- the 2/2 guys for three mana. I was just waiting for them.

Sideboard: You took Toxic Stench first pick, but you were thinking about Treacherous Werewolf. Was that because you were afraid you weren't going to get enough creatures?
Levy: I had a lot of creatures, but I still didn't know exactly what to take. I took Filth over Lava Dart because I have two Chainflingers, (Cabal) Torturer and a lot of burn, but Filth just destroys my deck. I would need to use Haunting Echoes to remove it...it's good against black.

Sideboard: So it's more of a counterdraft, but it also helps you out against other black decks.
Levy: Yeah. I could have taken the Lava Dart, but... 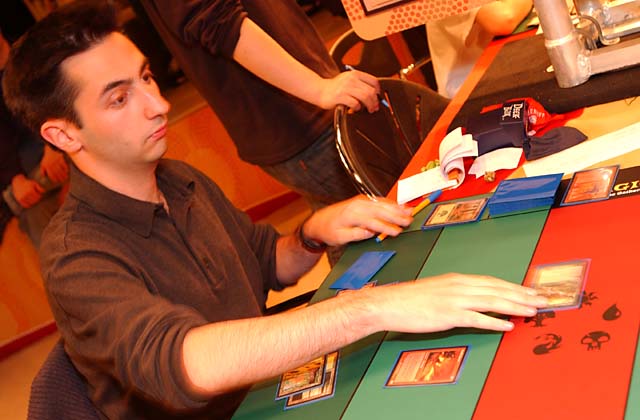 Sideboard: You took Stitch Together over Goretusk Firebeast and Earsplitting Rats. Some players like the Firebeast, but I saw you give it no respect whatsoever. You took Web of Inertia over it. You just don't like the card?
Levy: I like it in aggressive decks, but...

Sideboard: This is more defensive even though it's black/red.
Levy: Yeah.

Sideboard: So the plan is to blow up most of their guys, hold back attacks with the walls and swing with some random guy?
Levy: Yeah, that's the plan. The Beast is too expensive.

Sideboard: If that's your plan I guess Sutured Ghoul can be your kill card.
Levy: Probably, or just 2/2 dudes. Plus I have two Chainflingers.