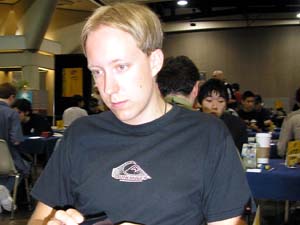 though Kai Budde won Player of the Year last season, a strong argument can be made that Mattias Jorstedt's consistency rivaled the German Juggernaut's usual dominance. With an astounding three Pro Tour Top 8 finishes in a season, and a Pro Tour victory in one of them, Jorstedt proved that he is among the elite. He doesn't seem to be slowing down at all, as he played his way to the finals of the Invitational a few days ago, which will be concluded this weekend. Needless to say, he'd like to be on stage twice this weekend- for the chance to make his own card, and to add even more acclaim to his already impressive Pro Tour resume.

Jorstedt's first pack wasn't very impressive at all. The only playable cards were Vulshok Berzerker, Consume Spirit, Tel-Jilad Chosen, and Auriok Transfixer. Jorstedt wasn't too happy with his options, and took the Chosen. The second pack provided a clearer decision, as it contained Terror and no other cards at the same level. The third pack was just as underwhelming as the first one, providing a choice between Cobalt Golem, Krark-Clan Grunt, Soul Nova, Hematite Golem and Mesmeric Orb. Surprisingly, Jorstedt took the Soul Nova. This may have been based on color decisions more than anything else, as he took Leonin-Den Guard over Pyrite Spellbomb in the following pack. Leonin Scimitar provided some equipment for the growing synergy of the deck, and Jorstedt took Scythe of the Wretched over Thirst for Knowledge and Serum Tank.

Pack two visibly irritated Jorstedt, as he saw Spikeshot Goblin and Skyhunter Cub. Even though Jorstedt wasn't really committed to a second color, he took the Cub anyway. In pack two he had to decide between Blinding Beam and Skyhunter Patrol, and took the 2/3 flier. A second Patrol came third pick, followed by a second Cub fourth. There were still plenty of good cards coming around in other colors, as he took a Raise the Alarm fifth, passing Vedalken Archmage, Creeping Mold and Irradiate.

If Jorstedt's plan from the start was to stick with black in hopes of cleaning up in Darksteel, that strategy paid off. He started off with a pair of Echoing Decays, and got Razor Golem third. After that, the decisions became fairly difficult. His deck had a significant amount of creatures that needed equipment, which meant that he had to consider the hardware over better cards. He took Thunderstaff over Whispersilk Cloak with a pained look on his face, and when Razor Golem was in a pack with Vulshok Gauntlets he rested his head on the table before reluctantly taking the equipment. Even a seventh pick Essence Drain wasn't a no-brainer, but he eventually did take the removal spell. Jorstedt also passed an absurd amount of Quicksilver Behemoths that seemed to keep coming no matter how deep into the pack the draft was, and he wasn't too happy about it.

TW: So how do you think it went?

TW: Yeah, I was going to ask you about that actually.

TW: Taken the Beam because you got another Patrol?

Jorstedt: Yeah. But, it's easy to make things up afterwards.

Jorstedt: I like green, and Chosen is a fine card in a green deck. I was ready to discard that first pick anyway, no matter what.

TW: Fourth pick, you took a Den-Guard over Pyrite Spellbomb. Is that because you figured you were going to go into white because…

Jorstedt: No. I was pretty sure that the guy to my right had taken a red card.

TW: Oh, really? Because you didn't see any other red cards?

Jorstedt: No, I'm pretty sure he took a Shatter or an Electrostatic Bolt because of how the pack looked. I'm very sure of that.

TW: There was a really late Thirst for Knowledge and you were kind of shaking your head. I guess it was too late to go into blue at that point.

Jorstedt: Yeah. I took Scythe of the Wretched over it. As it turns out, it's rather crucial that I got it because I'm low on equipment.

TW: In the second pack, there was a Spikeshot Goblin and a Skyhunter Cub, and you took the Cub. Why was that?

Jorstedt: Once again, I knew he was red, and it makes no sense taking the Spikeshot there because it means I get no red cards in Darksteel.

TW: I'm guessing then that the plan was you've got your Terror, and you're hoping to get black in Darksteel.

TW: And that worked out pretty well. The Whispersilk Cloak and the Thunderstaff, was that a problem? For three or four picks in Darksteel you just had your head on the table with this expression of "I don't know what to do!" I'm guessing that's because you needed equipment.

Jorstedt: The Cloak isn't really that good in this sort of deck. Also, when I had to pick Morningstar over Razor Golem, that was…that is not a fun pick to make. I think Razor Golem is much better, but I have two Cubs and lots of evasion.

TW: So how do you think you're going to do with this deck?