Your Move Games' Rob Dougherty sat down to draft this morning with a 5-1-1 record; he was seated in the 8th chair of Pod 4, between Brock Parker in seat 7, and Brock's girlfriend Tammy Ehrhart in chair 1. The squeeze was on. 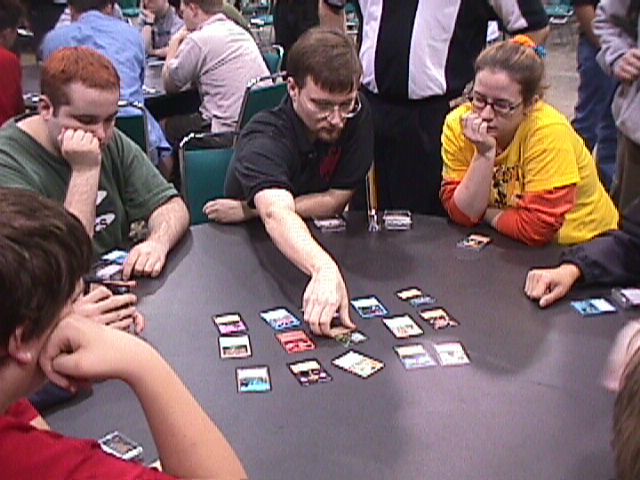 The draft started out well enough, as Tammy set her sights on white/black, and Brock was content taking all white cards, with two Auramancers, a Beloved Chaplain, and an Angelic Wall early. That left the door open for Rob to be solidly red/green, which he did, picking up a pair of Blazing Salvos, Cartographer, Barbarian Lunatic, and a Moment's Peace.

It looked like Brock was leaning toward blue as his second color, but he surprised Rob by picking Liquid Fire in pack 5, a card that shows a willingness to commit to heavy red. Rob was left with a Krosan Archer from that pack.

When Brock took a Cephalid Retainer in pack 7, it looked like he might return to blue and abandon red. Rob continued to take green creatures like Werebear and two consecutive Nantuko Disciples (he opened both) from packs 8 and 9.

Rob picked up a Diligent Farmhand and a Leaf Dancer, and then made an interesting pick in Junk Golem over Rites of Initiation. Rob later commented that he likes the Golem's ability to give him threshold. Brock, meanwhile, was back into red with Demoralize and Engulfing Flames. Rob's position, which looked so good at the beginning of the draft, was not looking as good now, since Brock was in red and Brian Kibler, on Brock's right, was green/black.

Rob made another odd pick in pack 15 when he took another Diligent Farmhand over a Flame Burst, handing the Burst to Brock. "I have a huge bias when it comes to Diligent Farmhand," said Rob, "I love the card." He also took a Chlorophant over a third Disciple, which he later admitted was probably a mistake at the time, although his three Werebears should make casting the 'Phant easier.

Over the rest of the draft, Parker's decision to cut into red didn't hurt Rob too much; Rob got a gift 6th-pick Chainflinger coming one way, and an Elephant Ambush fifth coming the other way when Kibler opted for a Morbid Hunger instead.

Near the very end of the draft, Rob dipped into black ever-so-slightly, taking a pair of Morgue Thefts (to the chagrin of Tammy) over red and green cards like Moment's Peace, Magma Vein, and Halberdier. The addition of black was made possibly soley by Rob's love of the Diligent Farmhands.

After the draft, Rob said that there was no way he was backing out of red once Brock switched into it. "Red is a support color for green," said Dougherty, "and I was happy with the level of support I was getting."

Rob's deck looks quite solid, and I predict a 2-1 for him with it, with potential trouble coming from Brian Davis' U/B deck and Bryan Hubble's slightly better R/G deck featuring Kamahl.