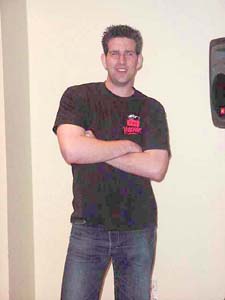 Rob Started in white early in the draft, and gained some good black as well, finishing the first pick with Shelter, Mystic Crusader, Patriarch's Desire, Afflict, Angelic Wall, Auramancer, Embolden & Aven Flock. It should be noted the he left solid red go past, leaving good burn and 2 late Barbarian Rings. The second pack gave Rob choices as Oliver was predisposed with other colours. Opening with picks of Morbid Hunger & Angelic Wall (making 2) he then grabbed a second Hunger over a Cephalid Looter, A Mystic Zealot over a Patriarch's Desire and a Morgue Theft over a Mystic Visionary. Along with matching Pilgrims (Red & Black), a 2nd Morgue Theft, a Devoted Caretaker, an Aven Archer and a very late Kitar's desire. The 3rd pack caught him off guard, with Thomas Stoddart unforunately committed in Blue/Black. With Greg Romans to his right (Blue/White), all he seemed to draft was black – leaving Rob out in the cold. With No black picks, and limited white due to the set size Rob was left wondering whether his deck would have the punch required to win 2 games in 50 minutes. We can only watch and see.

And so, the defending champion begins the defense of his title.