"Not the easiest table I have ever sat down to," offered Olivier as I approached him afterwards.

This was the seating plan:

And so fate dictated that the two French brothers should sit down next to each other on their own turf – a situation that is deemed to be a huge advantage should the players know their own draft preferences. In this case of course, they did... 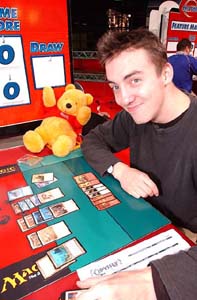 Olivier: " Antoine knew I liked drafting white/blue, so I thought it natural that he might end up black/green to my left.'

Olivier: "Well, red is a pretty good colour to splash in a white/blue deck if you have enough ways of discarding. You always pick up things like Fiery Temper and Volcanic Eruption in the last set."

(I will boldface the actual picks).

The Shelter obviously went hand in hand with his U-W strategy. He was expecting Antoine to take the Spellbane Centaur, but the Horror was picked instead.

The only card of any value picked up in the last few boosters was a Mystic Visionary.

This first set of boosters had worked out ok for Olivier, but Antoine had taken a bit of a beating. The smaller Frenchman had managed the following cards: 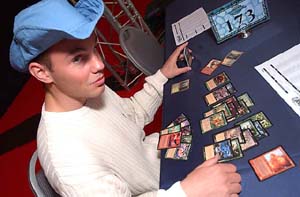 Booster 3: Gravedigger, Recoup, Angelic Wall, Chainflinger. I imagine at this stage Olivier resigned himself to being a three colour mage with slightly dodgy mana, but that has proven to be a typically French thing to do.

Booster 4: Cephalid Looter, Angelic Wall, Stone-Tongue Basilisk, Fervent Denial. WOW! A fourth pick looter. That is the kind of thing that happens when you have a brother sitting to your left.

Booster 7: Dreamwinder. At this point Olivier jokingly informed me that he would have taken the Battle of Wits, but there was a Druid Lyrist in the same pack.

In the remaining pack he managed to pick up a Tattoo Ward, Words of Wisdom and a couple of sac. Lands.

In this second set of boosters Antoine had managed to fix his colours as a black/green mage, but he was not happy with what he had.

Booster 1: Ambassador Laquatus, Deep Analysis, Cabal Torturer, Narcissism. There was very little else in the booster of relevance.

The rest of the boosters did not supply anything of real value, save a few defensive drafts.

So it seemed for Olivier that being a white mage had worked out quite well for him. He is playing 18 lands due to his dodgy mana-base, but his deck contains a whole bunch of good removal and tricks, and some fairly powerful creatures. I would expect him to 3-1 with this set of cards.

Olivier: "I passed Antoine nothing in the draft – it was really awful. I hope he opened up some good packs."

Poor Antoine looked a little dejected as he walked of to construct – "My deck is nothing."