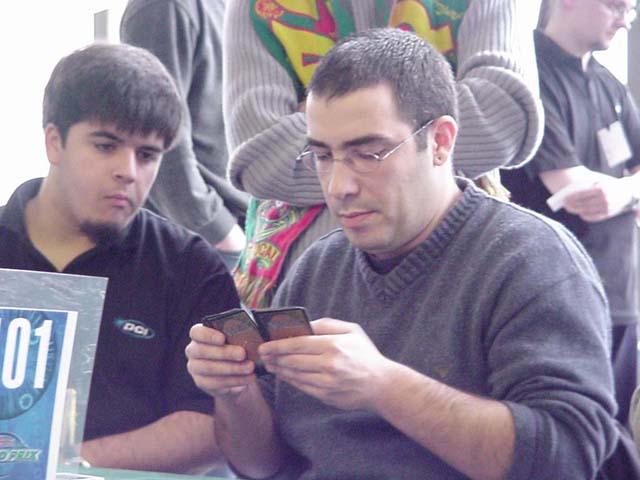 At the beginning of Day 2, there were only seven players at table one since Joost Winter, who finished day one without having lost a single round, did not show up to draft. The story behind that is available here

Apparently both Joost Winter and Alex Witt got stuck in their hotel room having to call the police to break down the door. Although they did manage to get out of the room they arrived two hours late.

Rui Mariani, who had a record of 7-1, was hoping to get his colors (black, blue and red) during the draft but wasn't going to fight anybody over them, unless he got amazing first picks. Very early on, he decided that both black and blue would be heavy drafted being two of the current favorite colors so his first picks were more green and red oriented. The Portuguese took solid creatures like Ancient Kavu, Tribal Flames and Pouncing Kavu. For his sixth pick he got Fires of Yavimaya, which gave his deck an amazing speed and new aggressiveness. With the second booster Rui noticed, that he didn't have any solid removal so he started working on that by drafting Plague Spores and Agonizing Demise. Then Mariani got his reward for being flexible in his colors with a second Fires of Yavimaya. Two boosters later, he had a third Fires to draft but was missing creatures to back up with his two fires so he chose an Alloy Golem. Once again Mariani got another Fires to choose from and took it since there were no other cards that could remotely make his deck. At that point, Mariani desperately needed creatures, in order to be able to make an aggressive R/G/b deck. His wish came true as he took a Flametongue Kavu, a Horned Kavu and Thornscape Battlemage. Mariani only needed some more creatures but did not find more than a Kavu Recluse and a Thornscape Familiar.