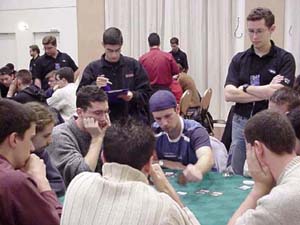 There is a little ceremony that takes place in most European Limited Grand Prix on the second day. Players crawl in at the very last minute dead tired from too little sleep (and some from the partying to celebrate making the cut) and plop down at the draft table. To make matters worse, the Head Judge goes on a long tirade of "lay down the cards... next... draft" in the most monotonous tone possible.

Today Cyril Grillon is holding the microphone and he is really good at getting all of us even sleepier. At table one, the mood was only broken by some antics from the veterans. While most inexperienced players are solely focused on drafting at the right time, the veterans exchange looks, jokes and table talk.

With Ben Ronaldson, Jelger Wiegersma, Alexander Witt and Ryan Fuller at the table we had enough recognizable names to make it an interesting draft. One of the things I wanted to find out is how to draft Odyssey. Yesterday a Pro Tour player told me, the key is drafting the underdrafted color because while blue and green might seem stronger they normally get a bigger fan base (loads of players drafting them) giving players who stick to the other colors more to pick from.

Unsurprisingly he was right, at least on this table. Ryan Fuller, whose draft I followed closer, stuck to black-red during the whole draft, even when players changed colors, seemingly randomly. All of the above mentioned players also stayed true to their colors.

Fuller had extra help from the seatings with Witt, a friend, on his left and only a player between him and Ronaldson-Jelger on his right. That made his draft a lot smoother and the stability of the color choices (with very few changes and only Jelger drafting his colors) enabled him to get a very, very solid deck.