At 9am Thursday morning, it was time to find out if the guys who mastered the Standard format knew how to draft. Interestingly, seven different countries were represented at table 1. The only duplicate? The Netherlands.

This article contains pretty much every important pick from the entire draft, along with pack by pack commentary. The star (*) marks the person who opened the pack and the draft order moves down the page (looping and horseshoeing in the obvious way). 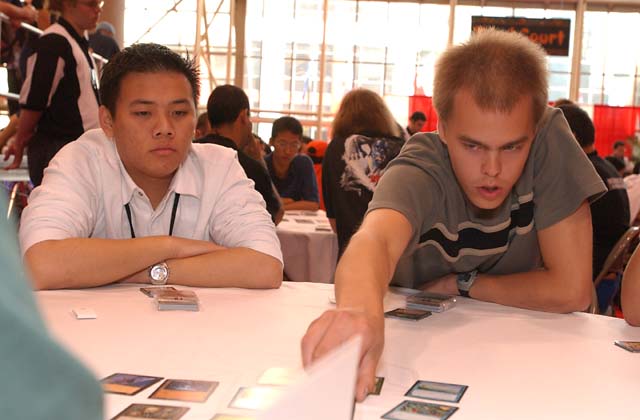 I thought this pack was fascinating. Tommi Hovi sent an incredibly loud signal to the entire table with his 3rd pick Quirion Elf, screaming "I AM FIVE COLOR MAN, HEAR ME ROAR." Brian Selden positioned himself to ride Hovi's coattails by taking the other 5-color green card from the pack. I thought Selden had the best position at the table at this point. Hovi looked more than willing to do all the work of forcing his neighbors out of green and then Selden could scoop up all the other green cards. Many drafters dislike drafting in the 7 or 8 seat at a Rochester table, but I actually prefer it because it allows you time to read a table and make exactly this kind of positioning move. When the 3-seat is throwing his weight around, there's no better place to be than directly across the table from him, sitting 7th. Selden and Hovi were also by far the most experienced players at the table, with three PT wins between them.

Oh by the way, Dutch national champion Tom van de Logt (who made Top 8 at Worlds last year and had the Netherlands in 3rd in the team competition after round 6) got by far the best card from this pack: the Trapper.

Wan took the rare Stormscape Master first, putting himself squarely in black-blue, a reasonable place to be with white on one side of him and green on the other. Tribal Flames looked perfect for Hovi's 5-color deck and Hovi still had seats 4, 5, and 6 scared so Fertile Ground fell to Selden, the perfect pick for him at this point. It allowed him to signal his intentions and pick up a solid mana fixer without having to "waste" a high pick. Van de Logt had to be happy with 8th pick Angelic Shield as it meant that neither of the players feeding him wanted to fight for blue-white.

Hovi had some great cards to choose from in his own first pack, but he felt he had to take Harrow. Many pros feel that 5-color green is only worth it if you get the mana fixers late and get to spend all your early picks drafting the best available card. Hovi didn't really know at this point what his mana fixer situation would be, it was only the 3rd pack of the draft, but he obviously values Harrow really highly. Zanam Djinn, Ordered Migration, or Urza's Rage could have gone straight into his deck. Selden had to be delighted to get Migration 5th at a table that only seemed to have 2 green drafters and Van de Logt's 7th pick Glimmering Angel was a sign as to how high the quality of this pack was.

The end of this pack was also quite interesting: when it came time for Antoine Ruel's second pick, Selden turned at stared at him. When Ruel took the Grappler, passing Selden the Quirion Sentinel that Selden wanted, Selden nodded and smiled.

Pyre Zombie or Breath of Darigaaz? With Hooded Kavu, Kavu Runner, and Urza's Rage already in his pile, this was precisely the question that Jan Tomcani was hoping he'd get to ask himself. His answer was Pyre Zombie and Joost Vollebregt continued to fight him for red, but no one could really blame him for taking the Breath.

Vollebregt had two good blue cards and two good red cards in his deck so far, so he made the obvious foray into black in this pack, drafting Duskwalker first. Coeckelbergh had been quietly drafting the beginnings of a solid blue-white deck, so he was delighted to get the Heralds. Selden took Serpentine Kavu, giving Plague Spores to Ruel.

Coeckelbergh's Repulse was an easy pick. Selden's was harder. He decided to play politics, taking a solid card for his own deck (Kavu Climber) while passing a card that a lot of people think is better (Urza's Rage) to Ruel. If Selden had taken the Rage, there would have been nothing for Ruel, who might then have been tempted to fight for green. In addition, Selden wanted to make sure that Ruel knew how nice he was being so Selden turned toward Ruel until he could catch his eye, and then nodded at him, sending the "Planeshift is coming - hook me up there and I'll keep returning the favor in Apocalypse" signal with his eyes. The table judge came over after this episode and warned both players, demanding "no more communication between you to." There wasn't any more after that.

These picks all seemed pretty straight-forward as everyone had settled down into colors by now. Tomcani's Tangle was interesting as it meant either he was considering fighting Hovi for green or he was hate drafting him.

Selden never did get a Harrow for his 5-color green deck - Hovi first picked the only one that got opened. Still, with two Quirion Elves, a Trailblazer, and a Fertile Ground, he had options.

Selden made a bold statement here - taking Quirion Explorer over Rith's Grove and Darigaaz's Charm. Hovi probably wasn't disappointed to get a 6th-pick Rith's Grove, but watching Tomcani take Darigaaz's Charm had to hurt. Now Tomcani was definitely adding green to what was previously a black-red deck and thus Hovi had to fight for green despite using a 3rd pick on Quirion Elves in an effort to scare out his neighbors.

1st pick Bog Down when you're playing all 5 colors is bad.

Selden's wheel in this pack was probably worth more than either of his early picks from the previous two packs.

After those first few, the Planeshift packs took a noticeable upswing in quality. Here Lashknife Barrier goes 5th. Van de Logt always seems to be on the receiving end of these gifts, too.

Here's Terminate #2, along with two other "banishings" and a big flier for van de Logt.

Hovi's 5-color deck did a lot better with its early picks than Selden's. Whereas Selden took Bog Down and Quirion Explorer 1-2, Hovi got to take Stormscape Terror-mage and Flametongue Kavu. Selden got yet another elf from this pack.

Here's the 2nd Crosis's Charm for Hong Kong player Johnson Wan. Hovi wound up with his second triple-land, a perfect 8th pick for him.

The last 5 Planeshift packs were just plain better than the first 3. Selden could have taken Crosis's Charm from this pack, but he opted for aggression over power, taking Horned Kavu instead. He may have been trying to keep his colors down to just 3 at his point (his only blue card was Ordered Migration and his only white was the Migration plus a Cloak). Red-green beats with black for removal plus a Cloak? It seemed unlikely to me that he could stay that focused during Apocalypse so I was surprised by this pick.

If you scroll back through the packs so far and look at all the cards that follow Tom van de Logt's initials, you see a very impressive trend. With the exception of a lone Sunscape Apprentice, his first selection from each and every pack is a solid main deck card that's either blue or white. Not only did he have outstanding card quality, but he managed to make it to his first Apocalypse pack without committing to a 3rd color. That meant he could just let the pack tell him, which it did. Illuminate meant blue-white touch red, one of the best archetypes available even when you don't open Illuminate.

The most interesting thing here was that Hovi preferred Savage Gorilla over both Coalition Honor Guard and Consume Strength.

Tomcani seemed happy here as he got to fix his mana and take home a $10 card. Vollebregt further muddied his colors with the Hunter.

Selden was going to take a card with white mana in the cost here one way or the other. He preferred the rare enchantment that gives all your attackers +2/+2.

Ruel also made it into Apocalypse without a well-defined third color. He had started out in blue but got scared away because there were so many other blue drafters at the table and Selden kept hooking him up with black and red cards anyway. In Apocalypse, Goblin Legionnaires kept dropping into his lap because white his splash.

Van de Logt finishes off with a third spectacular red card for his splash. His deck seemed like the best deck at a table where everyone wound up with a good one. Selden had nice position early, but the packs didn't cooperate with him and he wound up with what he described as "a deck that could beat anyone at the table but it could also lose to anyone at the table. It all depends on my draws." Hovi's 5-color looks full of bombs, Ruel's black-red splash white seems good, Coeckelbergh's blue-white is fine, Wan has good cards, Tomcani seemed to draft a bit erratically and I wouldn't have dipped into green in his seat, but it's hard to go wrong when you have Pyre Zombie, and his deck is the most aggressive at the table - that might be just the ticket against all the bombs that are getting played.

Basically, everyone has a good deck. I wouldn't have expected anything less from table 1 at the World Championships.