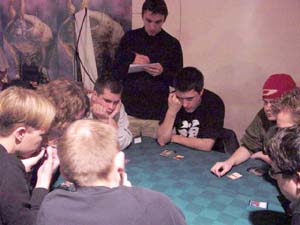 The first draft at table one is always vey important for the rest of the tournament. While the 56 other players are playing to get closer to the top, one of these eight guys will be in Top 8 in three rounds while three other players will be 2-1 or 1-1-1 from being in the top 8.

Rochester draft looks a lot like team draft. Indeed, the very basis of the format is cooperation. When one player hesitates for too long between colors, it always hurts someone at the table. That's what happened with Daniel Eriksson, the only rookie at the table.

In the first pack, he first picked Avalanche, while Baberowski took a white pick. As the team PT champion choose to first pick Sparksmith on the next pack, it was obvious that Eriksson had to choose a second color other than white. But with two or three green mages (pretty hard to see what Struik drafted) on his right and the fear to draft blue, Daniel didn't have much choice, his second color had to be white (which would be more of a problem for Dirk than for him) or black. As he chose to take Pacifism, the Phoenix Foundation member probably didn't feel very happy.

At the same time Baberowski (W/R) and Wiegersma (G/B) were cooperating perfectly, Boberg was taking all the good cards not afraid to play three colors (W/B/R) and GP Hamburg Top 8 finisher Jens Krause was enjoying the blue mage solitude. Another player was obviously unexperienced at rochester, Dutchman Martin Struik. He did all the communications mistakes he could do - not showing in a clear way what he was drafting, counterdrafting when there was nothing left for him in the pack. A strategy that GP Naples Champion Pierre Malherbaud and Matthias Jordstedt certainly didn't enjoy. If Malherbaud's G/B deck seems pretty solid, no doubt he would have liked Nantuko Husk in his Symbiotic Wurm-double Symbiotic Beast deck.

Jordstedt is probably also not happy about the way the draft occured. Despite getting three Wellwishers pretty early, he was seated between the two undecided players and didn't get very lucky in the draft.

The turning point of the draft was when Eriksson decided to become the second blue mage. Jordstedt had had the same idea but just didn't take enough cards to dissuade his neighbour from taking this color.

From this time, that is to say at the beginning of the second pack, Krause only received half of the cards he expected, but with very strong red (Slice and Dice, Insurrection) he still got a pretty good deck.

Despite a controversal pick (Gustcloak Harrier over Mobilization), Baberowski seems to have a very strong deck too, maybe the best at the table (Aven Brigadier, Lightning Rift, Sparksmith...).

But the surprise of this draft could be Fredrik Boberg. The relatively unknown Swedish player was the only one who didn't seem to fear playing three colors in draft. If he doesn't have any mana problems, his Jareth-Mobilization deck with red and black removal might do very well.

My predictions for this table :