At a table with two World Champions, the title holders came away with most of the goods amid several quiet five-color squabbles.

Here was the seating:

Invasion Packs: Five-color or No?

Six players seemed to settle down nicely right away into colors. With a first pick Spinal Embrace (and no other obvious blue-black), Djinn got to send a rare signal from the first seat. Since Brian took a Charging Troll and Dan Brasil do Carmo took a Tribal Flames to his left, and Wessel Oomens took a Phyrexian Slayer and Jan Sorenson took a Kavu Scout and Llanowar Knight to his left, Djinn looked reasonably set. 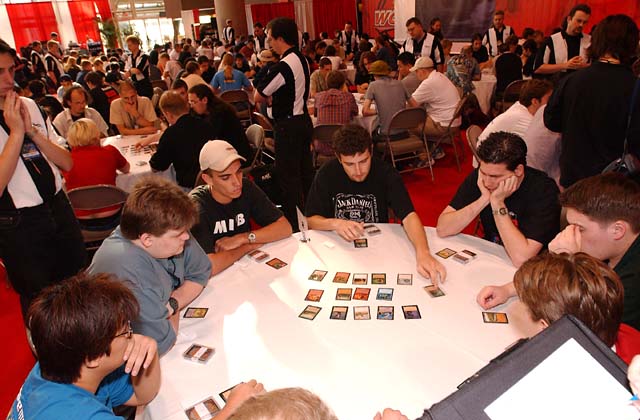 But as the experts say, a Rochester doesn't even begin to settle down until the fourth or fifth pack. By then, Jan had begun exploring blue-black with a Recoil, Ravenous Rats, and Tower Drake. In the seventh pack, Jan took a Tidal Visionary . . . and then in the eighth, he took his first pure green card (with only the Llanowar Knight even splashing green before it): Harrow. Djinn gamely kept with his own Embrace signals, finding a Vodalian Zombie and both Zanam and Goham Djinn as the Invasion packs progressed.

Meanwhile, Jon Finkel across the table had developed a five-color strategy much earlier, swiping two Nomadic Elves and a Harrow and sending clear signals across at least three colors - green, white, and blue - that he would be exploring his options. For the first set of packs at least, green was rich enough for Rob Nadebaum to both respect Jon's desire for five-color, and still dabble in strong green-red picks such as Pincer Spider, Tribal Flames, and Kavu Chameleon. He also let the second Nomadic Elf pass to Jon in favor of Recover, perhaps seeing that there were only two players completely serious about it so far (Dan and Wessel).

Kai, meanwhile, settled nicely into a pure blue-white deck, finding no battles among his immediate neighbors as he acquired solid but unspectacular picks such as Benalish Trapper, Glimmering Angel, Tidal Visionary, Vodalian Serpent, and even a Coastal Tower.

As far as red-black removal went, the table let (or saw) most of it go to Dan (two Tribal Flames, Lightning Dart, Plague Spores) and Wessel (Soul Burn, Scorching Lava, Annihilate). Blue got none of its "removal" cards (no Repulse, no Exclude, no Stormscape Apprentice), and white only saw a couple of Trappers and a Shackles. The lone Thornscape Apprentice went to Brian Davis, who had compiled quite an impressive green-white deck so far.

While red-black removal cards had been only moderate throughout Invasion, in Planeshift they came out in force.

Four different players (Jan, Wessel, Rob, and Dan) got first-pick Magma Bursts, with Jan picking up a fifth Burst as Djinn passed on one to get a Hunting Drake. Strafes went to Rob and Dan. Two Terminates also showed up, one each for Dan and Jan. In the midst of this, Jan confirmed to Wessel that he was competing on the black-red axis by taking Nightscape Familiar, Volcanic Imp, and Slingshot Goblin. Djinn took this opportunity to reinforce his blue-black, with two Cavern Harpies and a Confound to join the Hunting Drake.

On the other side of the table, Jon spent the first few Planeshift packs consolidating his gains in green-white-blue with two Silver Drakes and Lashknife Barrier. Then he began sliding into black with two Marsh Crocodiles, and picked up two mana-fixers in Treva's Ruins and Terminal Moraine. Rob stayed largely green-white with strong picks like Alpha Kavu, Strafe, and Caldera Kavu.

Kai, meanwhile, scooped up two Hunting Drakes, two Samite Pilgrims, an Aurora Griffin, a Confound, and even a decent bounce with Meddling Mage and Sea Snidd. Next to him, Wessel seemed somewhat frustrated by Jan's tinkering in red, but still managed to pick up two Lava Zombies and a Volcanic Imp of his own. He also signaled some willingness to go into late green, with Stone Kavu. (This was also a bit of retaliation to Jan for taking the Volcanic Imp in the same pack.)

Brian and Dan got along a lot better, with Dan picking up the awesome removal noted above while Brian indulged in a bit of blue (which no doubt thrilled Djinn), including Rushing River, Disciple of Kangee and a Stormscape Battlemage (that last with no obvious green-white first pick). In perhaps his only questionable move, Dan at seventh pick chose Kavu Recluse, perhaps expecting the Planeswalker's Scorn to bounce back to him. Brian denied the bounce. Dan's face remained unreadable, but as some see the Scorn as free, multiuse removal, he probably would have been just as happy to see that card come back to him. On the other hand, Dan probably felt like he had enough removal, but needed creatures (he only had six or seven by that time, several of them blue rather than red or black, and none of them too impressive).

With red being spread around during Planeshift, Apocalypse was sure to be interesting. And it was.

This pack rewarded the most consistent drafters. First off, Kai's solid but unspectacular blue-white deck found white removal in Order/Chaos, deeper quality in creatures with Coalition Honor Guard and Coastal Drake, and a worthwhile splash of black in Urborg Uprising and Death Grasp.

Wessel, who had stuck to an r-b-g strategy, found two Consume Strengths and a Penumbra Bobcat to round out his colors. The other clear r-b deck at the table, Dan's, found a bit less success but slid more firmly into blue to find Razorfin Hunter and two Kavu Gliders. With no high-end creatures, Dan's decision to first-pick Quicksilver Dagger over Bloodfire Kavu may have been recognition that his late game could involve pinging and card advantage.

The clearest benefits from Apocalypse went to defending Champion Jon Finkel, who watched a Desolation Giant opened to his left slide through the entire table before he snagged it, together with Captain's Maneuver, in a first-rate bounce. With those cards, a Coalition Honor Guard of his own, an Ebony Treefolk, and a Goblin Legionnaire, Jon will have some work in blending his Apocalypse and earlier picks . . . but the result should be well worth it.

Brian, with a strong green-white-blue strategy evolving out of Planeshift, also found rewards in cards like Mystic Snake, Temporal Spring, Urborg Elf . . . and even the wacky Fungal Shambler. It will be interesting to see if he splashes black for the unwieldy but powerful beast.