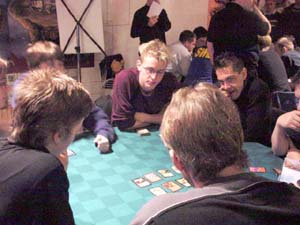 Before the draft started Budde admitted he had no practice in Onslaught limited other than two sealed decks. His strategy was simple, the gold cards in the set looked pretty good. He is right about that, there has been some complaining from the players that some rares in this set are just too dominating. Budde needed to crack the first pack and he could follow his intended strategy, when Rorix Bladewing was revealed, which he put slightly aside while he finished laying out his pack. During the review period it was obvious that the cards are still new to most players, everybody was reading the cards instead of thinking about their strategy. Budde picked the Rorix and Levy who was sitting to his left took Gravel Slinger.

After that the battle for green began with Rune Espenheim taking a Symbiotic Elf and Sondre Ellingvaag in seat 4 taking a green card as well. Levy's strategy was pretty straightforward; he would draft any color as long as it wasn't blue. When he opened a Mobilization, he was happy and picked it up. Espenheim took the Shock and Ellingvaag took another green card. During the next couple of boosters the rares weren't as good, while people were trying to establish their colors. Levy picked up some black cards to go with his white, while Budde wanted the blue Levy was afraid to touch as Seppo Toikka across the table was taking them to go with his white. At the end of the first pack Budde could continue with his rare draft strategy. Stefan Petersen took a mediocre red card over a Goblin Sharpshooter, which Budde was happy to take. The following booster Budde was offered a Blistering Firecat while Levy took his first of three Pacifisms he would end up with.

Espenheim was red/black with a green splash. Ellingvaag was green/red just like Petersen in seat 7. In the first couple of boosters only Toikka and Levy were the only ones taking white. Frederic Courtois in seat 8 saw this and quickly changed into the underdrafted white. If he hadn't done that Budde might well have changed to white if Courtois hadn't done it even though he didn't want to fight with Levy, white is too good to have only two people drafting it. The white of Courtois was paired with black. Amiel Tenenbaum in seat 6 was drafting green/black.

When the direction of the draft changed nothing interesting happened. The players took their picks and Levy's deck didn't come together like he wanted, as the white cards he was hoping for weren't showing up. Budde was planning on going for an aggressive blue red in the beginning of the draft but at the end of the second booster when he already had some control cards and was passed a Lavamacer's skill and opened another one, it was clear that he should be going for a more control orientated deck.

When Budde opened his third booster Arcanis was staring right back at him. He picked him happily while Levy took a Death Pulse. There was also an Aven Fateshaper in that booster which Budde considered picking over Arcanis. Toikka saw his chance and picked a good white card over it and got it back from the wheel because nobody was really hate drafting on this table. When the fifth booster was going around everyone was surprised when Petersen took a Battering Craghorn over a Sparksmith. Budde was happy to pick up the Sparksmith which combos very good with the Sharpshooter and the two Lavamancer's Skills.

When the booster came back it still had a Riptide Entrancer in it, which upped Budde's playable rare count to five. I guess he once again found the correct strategy for this format. Levy's deck was not coming together even though the Catapult Master he got would help him in longer games if he would be able to get his Mobilization out. Budde picked up some burn in the last booster to finish his already incredible deck.