You can follow this draft pick-by-pick. Be sure to check out three feature matches involving the players from this pod as well. 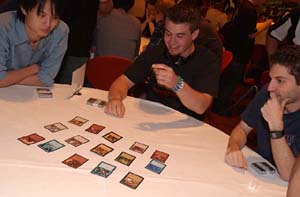 The draft started out with an exciting pack; exciting for Brian Kibler, anyway. After laying out his first pack of the draft, Brian could barely contain himself from grabbing the Exalted Angel before Head Judge Rune Horvik announced that the players could make their fist pick.

The first pack—unlike many of the others in this draft—was quite deep and all eight players were able to make firm declaration as to their primary color on the first pass of cards. Steven Wolfman took a Lightning Rift, Gerard Fabiano took a Smother and William Jensen took a Shock. Next up was Dirk Baberowski who saw no white players between himself and Kibler and declared himself as the other white drafter at the table by picking Foothill Guide. Daniel Brasil was happy to take a Spitting Gourna, Wolfgang Eder took a Battering Craghorn and Mongkol Tochasukjai eagerly wheeled a Mistform Wall and an Imagecrafter to announce blue—most likely blue-red.

The second pack had a pair of bombs—Sparksmith and Kamahl—and Wolfman took the common sending Gerard into green-black. Huey stayed the red course with a Goblin Taskmaster while Dirk took a Piety Charm—just in case anyone forgot he wanted to be white. Everyone got the message—the only problem was that there was no white. Dirk ended up taking two Daru Cavaliers as his picks in the third and fourth pack. He had a chance to take a third out of his opening pack but took a Cabal Archon instead. 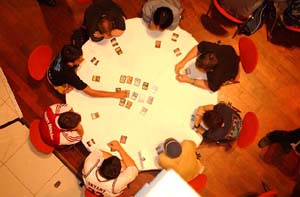 Kibler was also floundering for white and had latched onto black as his life preserver. He did not get another playable white card in the first set of packs after the Angel. Meanwhile, Huey was trying to figure out what his deck was going to be. He had picked up an Insurrection and a Lightning Rift in his next two packs but his second color was unclear. Gerard was green-black to his right and there were shaping up to be two blue-red drafters already—Wolfman and Mongkol. With blue way to thin to share three ways, Huey wheeled into green with a Serpentine Basilisk and Treespring Lorian when Gerard bounced the cards off of him after taking Tranquil Thicket. The two jockeyed for green for the rest of the draft without getting contentious. "I think we drafted as cooperatively as can be when you share a color."

Still, Huey was disappointed with how the draft turned out. "Bad...very bad," was how he described the draft. He wasn't laying the blame anywhere but on the packs, "The cards just didn't open well I guess. I don't think I could have done things any differently" He was pretty glum about how things turned out and thought the key to his success was getting a Timberwatch Elf, "It gives my deck a chance to win." He also got a late pick, last pack Wirewood Symbiote, which should be very good in his deck. Huey claimed he had no good cards when he displayed his sliver assortment for the camera but Insurrection should win him some games—he can accelerate to it with Goblin Clearcutter and Elvish Aberration. Of course, he might not need to if he draws his Timberwatch/Symbiote combo. I predict at least a 2-1 for Jensen.

Kibler was more enthusiastic. He was being serenaded by deck registration table-mate Antonino De Rosa who was coveting Brian's Exalted Angel that was proudly on display on the top of his pile of cards. "Lucky, lucky...You are so lucky!"

Kibler shrugged and agreed, "There are no cards I would rather open than Exalted Angel, a grand total of zero." He also agreed that it was odd how few white cards were opened in the first set of packs. "Dirk and I set ourselves up as the only white drafters across the table form each other and there were no Lancers, no Glory Seekers, no Harriers—no Dive Bombers even!" Going into Legions neither player was very sure about how white their decks would be. In fact, when four Daru Stingers were opened in Legions, only one of them made it into either player's pile of cards—and Kibler wasn't even playing his. 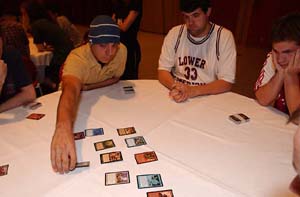 "I'm certainly happy with how things went though." Key to the draft for him was stubbornly sticking to his colors even when there was little there. Looking through his cards there are only three of his forty-five cards that are not either black or white. "Even when there wasn't anything I would play in my deck I took a black or white card over absolutely anything just to keep people from even trying to signal that they were playing black-white." Kibler has the deck to go 3-0 at this table.

Once he and Dirk survived Onslaught as the only white drafters they were set up pretty well for the remaining packs where white is strongest. Like Kibler he is not running much white from Onslaught. The Battlefield Medic and an unlikely Foothill Guide made the deck while the Cavaliers sat on the bench. "I don't even like Cavaliers—I'm not going to play them." They had already served their function for Dirk—helping him to signal that he was going to play white. "My deck turned out okay—I guess that happens when you have two white guys at the table." Then he reconsidered what made his deck okay. He was really playing very little white and the black was what made his deck solid.

He tried to bounce a white card here and there—a Convalescent Care was the most notable—without success. He thought everyone at the table drafted fine but he was quite impressed by William Jensen, "He went into green after Gerard. That was a pretty nice move. It didn't hurt me but it sure hurt Gerard." Dirk's deck looked a little underpowered but a Cabal Archon and a Starlit Sanctum should help propel him to at least a 2-1 record.

Results of the draft

1 Keeneye Aven 1 Master of the Veil

1 Form of the Dragon 1 Primitive Etchings

2 Patron of the Wild 1 Vitality Charm