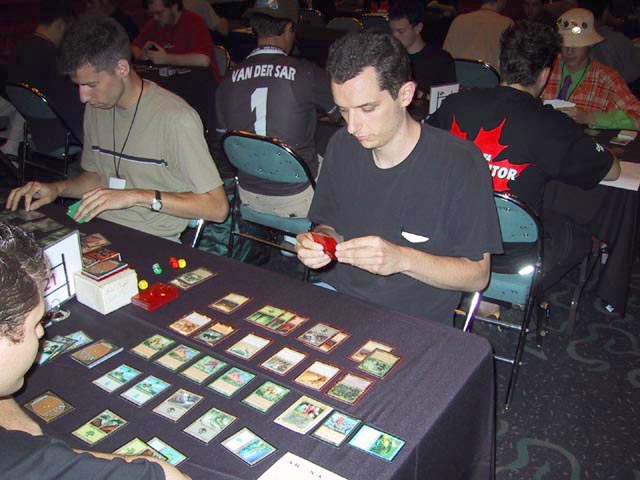 Going into the draft, Pro Tour players Terry Tsang and Matt Vienneau were friendly and talkative with the rest of their table. Joking aside, these guys have some strong skills between them. Vienneau is a two-time Grand Prix Champion, both times winning a limited Grand Prix, and Tsang has a Top 8 Pro Tour finish on his resume. Terry Tsang's plan in the draft was to go after Blue. "I want Blue/White, Blue/White/Red, or Black/Blue/Red." Vienneau's plan on the other hand was more esoteric. "Grand Prix Canada. That's what I want. I don't have a particular color combination I'm after."

The first packs of the draft showed some early posturing. Tsang sat at the second seat, a seat that is often disliked in Rochester Drafts because of the difficulty in establishing secure holds on your colors before neighbors do. Vienneau's set was the much coveted fourth seat. Vienneau's early picks set him clearly to Green, with a likely stretch towards Green/White, with a Thornscape Apprentice as his first pick and a Molimo, Maro Sorcerer from the second pack. Tsang's first pick of Tower Drake over cards like Smoldering Tar and Tribal Flames set him clearly after Blue, according to plan. He followed up with a Recoil in the next pack. With none of their neighbors clearly competing for colors against them, it looked like there was going to be a fairly friendly bit of cooperation at the draft table. "I'm a friendly guy," joked Tsang. "I'm like a sleeping bear - you just don't want to wake me up."

Things began to shape up for Vienneau as the draft progressed through the Invasion packs. Following up his picks with Nomadic Elf, Aggressive Urge, Explosive Growth, Quirion Elf, he was strongly secured in Green, but followed up his white only lightly, with a Benalish Lancer and a Rampant Elephant as his lone White cards. A Fertile Ground allowed him to dabble a bit, and he also picked up a Crypt Angel in the pack he opened - a pick that was clearly the best card in an otherwise mostly weak pack. In the last pack, he appeared aggravated after having a Quirion Trailblazer stolen away from him by a previously Black/Red/Blue neighbor, leaving him with a Rogue Kavu instead.

Tsang, on the other hand, struggled a bit here. While he started out with a Tower Drake and a Recoil, he didn't get much to follow up with until the sixth pack gave him a second Recoil, and the final pack gave him an Agonizing Demise. The rest of the picks would end up as mostly filler cards like Cursed Flesh and Dromar's Attendant. A lone Stormscape Apprentice signaled a possible approach into White (especially with the Tower Drake), but he would probably have to compete with the Green/Red/White player to his right for access to White cards.

In Planeshift, things improved considerably for Tsang. Two Cavern Harpies, a Rushing River, a Confound, and more than a fair number of reasonably useful Black/Blue/Red creatures came into his deck, making it into more than the caricature it had been. Clearly stepping away from White, his Stormscape Apprentice from the first pick would still be quite useful as a finisher and a way to drop a quick Cavern Harpy. His Green/Red/White neighbor stepped deeper into White, while his left neighbor competed heavily with Terry for choice cards like Marsh Crocodile and Lava Zombie.

Vienneau continued strong with Hobble, Fleetfoot Panther, and the opening of a Flametongue Kavu, signaling his first real approach into Red. The player to his left started marching soundly into green, taking out Thornscape Familiar and Amphibious Kavu from Vienneau. Despite this, Vienneau grabbed some great cards for his deck, including a pair of Gerrard's Commands and a Gaea's Might.

Apocalypse is what makes this Rochester format something that is worth watching. While this isn't the first tournament to make use of Apocalypse drafting, it is remarkably close to Worlds, and many of the competitors have had more of an opportunity to get more of a sense of the format. One of the most confusing things about Apocalypse for many players is the change in powerful color combinations. Many people go into drafts with "allied" colors and end up in the Apocalypse portion without a strong set of color choices.

Vienneau stretched his colors into a splash for Consume Strength, AEther Mutation, Death Grasp, and Gerrard's Verdict. This kind of stretching is very common for green players, and Vienneau's color fixing was quite decent, with Quirion Elf, Fertile Ground, and the excellent Nomadic Elf. There were more than a few good cards besides his splash, however. Gerrard Capashen added to his already aggressive deck, and Manacles of Decay joined a few Flagbearers like Coalition Honor Guard and Standard Bearer.

Tsang also did well, though he stayed firmly in the traditional color combination of Red/Black/Blue. Prophetic Bolt, Jilt and Coastal Drake were the strongest cards he picked up in Apocalypse, but he also picked up one of Gary Wise's favorite black picks, Dead Ringers. Whirlpool Riders, Living Airship, Mournful Zombie, and Quicksilver Dagger rounded out his picks.

"I've had better drafts," said Tsang afterwards. "At least I have the colors I want. And, I suppose I have 23 playable cards. The guy to my left kept cutting me off on the Planeshift packs. We'll see how it goes."

"I took too many creature enhancement spells, and I think I made one big error by passing up a Quirion Explorer for a Gaea's Might. I ended up with 5 creature enhancement and not enough creatures. Plus, I knew that I might be splashing in Apocalypse for other colors, and the Explorer would have helped quite a bit. I have a lot of bombs, but the real bombs seemed to be for the Black/Red aggressive decks in this draft. There are two at our table, and they are the hardest decks at the table to beat in this draft."