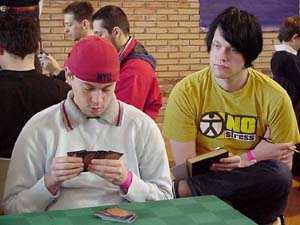 Thomas is a well-known player in Sweden. He has been on the National Team for the two last years. And that's the two times he played at Nationals. He also made a name for himself writing the best tournament reports this side of the Atlantic Ocean. Now he is on the gravy train and trying to stay on it. To achieve that he needs one more point either today or in Nice.

Having two byes here in Naples meant he stood a good chance of making day two. But his deck on day one wasn't that strong, so after losing his first match he seemed a little bit on the bitter side. Then things changed. He won three matches in a row and then made an intentional draw in the final round. So day two for Thomas it is. Now at least one of the three Swedes who made the trip managed to make day two.

This also implies that he was allowed to draft. He started out great first picking the Patriarch. It was the obvious first pick but it was a string booster containing cards like Ghastly Demise and Psychatog. Then he went on to pick cards like Afflict, Dusk Imp and Patriarch's Desire. He rounded up the first pack by taking Innocent Blood and Chamber of Manipulation, as he's seventh and eight picks. Really the only questionable pick in his first pack would be he's third pick Dusk Imp over Repel. Thomas thought it important to cut of black as early as possible.

His first pick in the second pack was another Patriarch's Desire. This time he did take the Repel when it was passed to him as a second pick. As a third pick he took a Gravedigger, the fourth was a Peek and the fifth a Sadistic Hypnotist. Then some white Cards like Animal Boneyard and Pilgrim of Virtue followed before taking a Frightcrawler and a Face of Fear.

In Torment he made the only pick he says was a mistake. That was Aquamoeba over Cabal Torturer. That was probably wrong but he really needed some two-drops. Torturer might have been better though. It really didn't matter as he then got passed Compulsion, Nantuko Shade and a fifth-pick Faceless Butcher. (I don't know, but I thought that fifth-pick Butcher only happened on Magic Online.) He also got Breakthrough seventh and another Amoeba as eighth pick. Tainted Fields and a Terohs Faithfull made his white splash meaningful and should help not getting mana-screwed.

What can you say about this deck? Thomas surely is short on guys. Another thing is that he got more combos with the Chamber than anyone would think is possible in draft. And of course, he did get a Patriarch. Some people say the Patriarch is good. I say he's broken. So it is a broken guy for a broken guy. (In my humble opinion.) Thomas said he thought he might go 2-1 with the deck. He could do the devastating 3-0 with it though. Just draw the Patriarch and win!