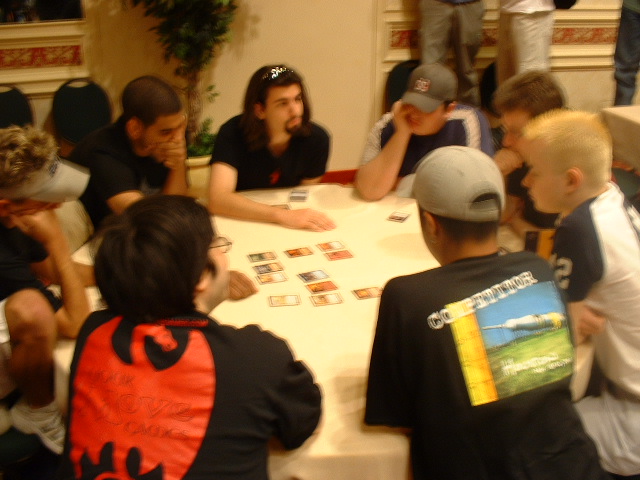 With a draft table full of pro players, you’re bound to expect co-operation. One by one, cards will be picked in each player’s colors, with each man at the table being careful not to alienate their neighbors so as to ensure continued co-operation. After the first pack, plans are laid out, picks are predictable and really, there’s no reason to continue watching. Right?

Would Sideboard Online do that to you?

Table one was a bloodbath folks. Pure and simple, things got ugly, with visible frustration, excessive hate and some all around bad drafting. Here in their entirety are the sordid details.

With the nature of Rochester draft being what it is, it’s the first 8 packs that establish players in colors and see jockeying for position. The combatants were arranged as follows:

Pack one was an extraordinarily weak one, meaning that players would concentrate on sending messages to their neighbors concerning where they wanted their individual drafts to go. Fear, in the unwanted seat one, picked the best card in the pack, Skirk Commando. Job followed this with a nice choice, selecting Screeching Buzzard over two strong white cards, Inspirit and Dive Bomber. Buzzard seems to be the right pick here for two reasons: Many players favor white as red’s companion, giving Job a cause to fear…well…Fear, and the possibility of the Rochester (New York, not draft) native cutting him off, and with black and red considered the must-have colors of the set and Ed in red in front of him, Jonathon realized he wanted to establish himself in black as quickly as possible in order to avoid having a red player on one side and a black on the other. Alex took the Inspirit, leaving Hegstad Wirewood Elf and Godinez the Bomber before Zvi picked Lay Waste as a way of signaling his intention to draft his favored red-green. Eisel picked Crown of Suspicion and Williams took Shieldmage Elder and Profane Prayers on the wheel (which means on his successive 8th and 9th picks)

Pack two was again weak, with Job this time making a questionable pick, taking Gustcloak Harrier, the strongest card in the pack after just having passed a number of strong white cards in pack one. Instead, it could be argued he should have taken Treespring Lorian, the best green card in the pack as green and black offer one another extraordinary synergy, but Job was correct with his selection in that with Williams going white with the Elder, Fear would likely go red-green, so white may have been his best option. The Lorian went to Hegstad after Shvartsman took Erratic Explosion, leaving Gerardo Severed Legion and Zvi Wellwisher. Eisel (That’s Game Boys!) selected Bloodstained Mire, presumably for the five-to-six tickets he’d be able to trade it for, Williams took Renewed Faith and Fear got Goblin Burrows and Explosive Vegetation on the reacharound. Eisel got a Forgotten Cave on the way back, suggesting that some players at the table may not have yet figured out that cycling lands are actually rather high picks in this set.

Looking at drafting white-red after his first two picks, Alex selected Goblin Machinist from yet another weak pack. Hegstad, looking at a weak start and noting there were no blue players at the table thus far, took the plunge, taking the weakest color’s best common, Ascending Aven, with Godinez selecting Haunted Cadaver over Shieldmage Elder, a questionable pick for a black-white player as those colors can produce insane Cleric decks. Williams eventually got the Elder, his second, after Zvi took Everglove Courier and Eisel a second Forgotten Cave, suggesting that Nick found it ironically appropriate to draft Turbo-Land behind Mr. Mowshowitz. A report in eight parts on Nick’s draft may follow.

Pack four was not the one Hegstad wanted to open, with the Seattlite looking for blue or green cards and only managing to find Discombobulate. As if to illustrate how weak a first pick that was, three packs later, Williams would get the same card 15th. Brian’s desire to not fight for colors may have clouded his judgment, as the pack, containing both Cruel Revival and Grinning Demon, allowing him to take the easy to cast kill spell as a potential splash card without angering his neighbor Godinez. Gerardo took the rare and Eisel the Revival, sandwiching Zvi’s Wirewood Elf pick, with Williams, in excellent position for white, selecting Gustcloak Harrier, Fear a Skittish Valesk, Job a Festering Goblin and Shvartsman the draft’s third Forgotten Cave.

Pack five started with what appeared to be a horrendous pick from Godinez, who selected Shepherd of Rot a card he’s presumably have a shot at later, over the easily-more-powerful Daunting Defender, leaving Zvi the bombalicious Silklash Spider. Eisel, deprived of the Cleric-Zombie, was forced to take Goblin Taskmaster in his refusal to ditch red, leaving two far better cards, Crude Rampart and Barkhide Mauler, for Williams and Fear. The Defender went all the way to Job, leaving Alex with just Crown of Vigor and Brian Sage Aven.

When Zvi, sitting mono green aside from one Lay Waste, opened his, pack, Eisel had to slump in his chair a bit when the PT Tokyo winner put Sparksmith on the table. Yes, there was a Wirewood Savage next to it, but it was unrealistic to think Mowshowitz wouldn’t take the goblin, solidifying his second color. Zvi did indeed take the Smith, leaving Shepherd of Rot for Eisel, whose pick suggested he might ditch red as he passed Thoughtbound Primoc. This was an especially strange pick in that Eisel knew he’d be playing either Job or Godinez in the first round, and with neither in blue, the Bird-Beast’s Wizard-bound drawback would not be an issue. Williams picked up another Harrier before Fear got the late Savage, leaving Job a Dive Bomber. Alex picked up the Primoc, Hegstad, now firmly in blue and looking for a second color took Slipstream Eel and Gerardo picked up Piety Charm.

Eisel could only shake his head when his booster produced nothing in black, forcing him to pick Charging Slateback, sending him back to red. This left Williams and Fear, who were co-operating very well at this point, the two best cards in the pack, Pacifism and Snarling Undorak before Job, firmly entrenched in the Cleric archetype, took Crown of Suspicion over Glory Seeker, a questionable choice. Shvartsman picked up Serpentine Basilisk, Godinez got the late Seeker and Zvi picked up his second Wellwisher, his third elf.

The final installment of the first round of packs, opened by Williams, offered Ascending Aven for his deck, leaving a second Savage for Fear’s red-green Beast deck and only a Daru Cavalier for Job. Shvartzman, by this time the third red-green player at the table, got Krosan Tusker, with Hegstad left no choice but to scoop up the residual Erratic Explosion. With the pack rebounding off Nick, Zvi was faced with two choices; awful card or blue card, and elected to hate the Riptide Biologist, leaving Fleeting Aven for Hegstad, but Godinez wasn’t about to let that happen and chose the cycler, leaving nothing for Seattle’s finest. This hate pick would be a harbringer of things to come.

At the end of pack one, here’s how things looked:

With the crucial first pack done, the note-taking was taken down a notch. When follows are a look at the more crucial moments of the next 16 packs:

Finally, a last look at each player’s deck and how their drafts went:

Ed Fear - The most cooperative player at the table, Ed would take the worst card in the pack rather than risk alienating his neighbors with a pick in their colors, as well as avoiding the possibility of offending players two or three seats away with his selections. Ed’s deck ended up one of the stronger at the table, a red-green beast deck with Sparksmith and two Savages, thought the smith was his only way to remove creatures from play, a potential problem in a draft with six others.

Jonathon Job - Job quickly inserted himself into the white seat and, his Crown of Suspicion over Glory Seeker pick aside, seemed to understand the format very well. His deck is a solid black-white mix, using clerics and four Gustcloak Harriers as his creature base and black kill as their support.

Alex Shvartsman - Alex’s draft was going fine until Hegstad moved into red, but the Russian’s frustrations over this led to a series of picks based on emotion rather than logic. Alex at times alienated both of his neighbors and was punished for it, but was able to manage a solid red-green deck nonetheless as a result of an extraordinarily deep pool of red and green cards.

Brian Hegstad - Starting in green, Hegstad was forced out by Shvartsman’s switch and left drafting blue and nothing but. Brian eventually found himself a second color, but a few poor picks, most notably the Biologist over Shapeshiter selection, left his deck weaker than it should have been. He definitely was not playing a political game.

Gerardo Godinez - Gerardo, at least for this draft, was easily the weakest man at the table, often picking the second or even third best card for his deck. He also appeared to have no understanding of archetype drafting, failing to understand which cards were key to succeeding with the black-white archetype.

Zvi Mowshowitz - Despite having the most powerful cards at the table, Zvi’s deck is far from great, thanks mostly to a lack of synergy. The Smiths and Spider not withstanding, Zvi wasn’t able to find more than two other elves to play with his Wellwishers, which still made the deck along with three Lay Wastes. Zvi, while not hating his neighbors, did at times make a point of hating those two seats away from him, taking a number of blue or white cards from Williams and Hegstad.

Nick Eisel - That’s Game Boys seemed to approach the draft with a single-minded approach, drafting red cards despite Zvi’s obvious leanings in that direction. Eisel was one of the few players at the table giving cycling lands their appropriate due, but may have missed the boat by not going green. His deck still ended up strong though, with three Cruel Revivals and a number of Zombies, including two Anurid Murkdivers with his potential first round opponents’ (Job and Godinez) respective names on them.

Dave Williams - Williams positioned himself extremely well in the draft, but the card pool dashed his hopes and dreams, forcing that pack 22 color switch. His white is still very strong, but the deck is not what it could have been had any of blue’s better rares been opened on his half of the table.

1 Crown of Awe 2 Crown of Suspicion