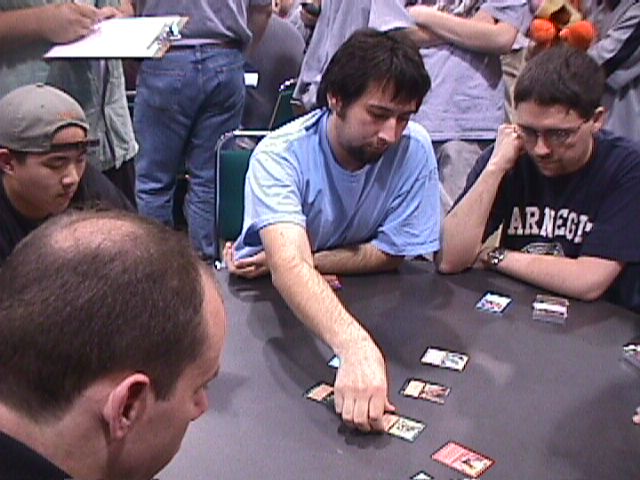 Trevor was the first to open, generally not a seat that is highly coveted amongst veteran Rochester drafters. There were many solid cards in this packs, including a couple of outstanding choices, making Blackwell's first pick very important.

Lieutenant Kirtar, Flame Burst, Overrun, Gravedigger, and Repel were the standouts for each color, respectively, and no surprise, Blackwell chose the Overrun.

Blackwell, picking at the end of the next couple of packs didn't see much action, though Minotaur Explorer and Nantuko Disciple made nice creature additions early. During the second set of packs, Trevor's quality of picks declined as Mikey P was taking red/green two positions to Blackwell's left.

Blackwell fell into a rut, getting nearly no playable creatures for packs in a row, and when Lee Steht in the number 7 position opened a Ghastly Demise for his B/G deck, Steht instead took the only green card, and Elephant Ambush. Blackwell could do nothing but sigh and get sympathetic looks from Dave Humphreys and Andrew Johnson.

Into the third pack, Blackwell needed some warm bodies and found many that suited him. Multiple Chainflingers and a late Barbarian Lunatic and Rabid Elephant will round out Blackwell's deck that has plenty of removal.

Blackwell appeared to be the least familiar with the cards, often leaning out to read cards during the draft. Perhaps his inexperience cost him a few picks as early in the draft Trevor took an Ember Beast over a Krosan Archer, a decision that was widely disagreed upon by spectators.