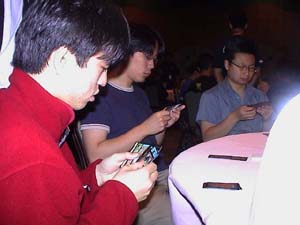 On or off the dance floor, there's no stopping Tsuyoshi "Mr. Rolly" Fujita. The celebrated Invitationalist first rose to the public eye as the Finalist at Pro Tour - Tokyo, the first Japanese player to make a Pro Tour Top 8. In the months that followed, he was dogged by a string of poor finishes, dismissed as a one-hit wonder. He's since pulled himself back together, evidenced by his fourteenth place finish at Pro Tour - Osaka. He hopes his good fortune will continue this weekend.

Fujita was less than wowed by the contents of his first pack. He saw Flame Burst, Skeletal Scrying and Second Thoughts. He looked briefly at Cartographer and Psionic Gift, but couldn't resist the pull of Second Thoughts.

The next was more to his liking. Krosan Avenger, Elephant Ambush and Muscle Burst were exactly the sort of cards he wanted. He took the Ambush without even considering Afflict. He followed up with Muscle Burst over Demoralize in a pretty thin pack. Then came Krosan Avenger, letting another Afflict through.

He was almost swayed by Ember Beast at this point, but Krosan Archer let him take a strong card and not stray from his main color. Next was Cartographer. Fujtia's insistence on staying out of red became clear as he sent Rites of Initiation on its way in favor of Timberland Ruins. As the packs wound down, Rites of Refusal made the cut, intimating that he would go green-blue.

On his left, Liang had been taking all the red that Fujita had ignored, supplementing it with what green he could find. On the other side, Zhou had opened Iridescent Angel and never looked back, drafting blue-white even though the card quality was not all the way there. So Fujita was in a bit of a tough spot. For the next pack he'd face a shortage of green, and in Torment he'd have his best blue stripped.

Things looked up a bit in pack two. Fujita started with Nantuko Disciple over Cephalid Looter, hoping it was a sign of things to come. The next had everything he didn't want. Dwarven Strike Force, Morbid Hunger, Kirtar's Desire and Flame Burst. Luckily, it also had Repel, and he took that.

Fanning out the next pack he sighed audibly. There were no green cards. The only blue card was Psionic Gift. He looked at Millikin, but chose Aven Flock instead. Assuming the worst, he was pleasantly surprised when he was shipped Cephalid Broker. He had to double-check to make sure it was the real deal. 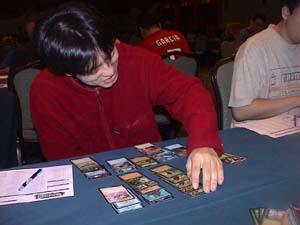 Knowing his curve was high, Fujita nonetheless took Scrivener over Cephalid Scout. The packs began to fail him. He took Aven Archer, and then Careful Study. Another Scrivener mocked his earlier choice. He could only shake his head as he wrapped things up with Shelter and Mirari. He needed a miracle.

Torment was not kind. Fujita started out with Ghostly Wings over Balshan Collaborator, then Stupefying Touch over Acorn Harvest. Deep Analysis got a smile out of him, and Breakthrough as well, but it was looking like Fujita just wouldn't have a way to win. He let a Compulsion go by in favor of Far Wanderings, presumably a nod to the three-color necessity he faced. A few green bodies showed up, but too many of them were Krosan Restorers.

Spread out, the deck's weaknesses were laid bare. No creatures before three mana. Few way to break out of a stall. And three colors on top of that. Fujita did what he could, but admitted that 0-3 was an all-too real possiblity with this pile.