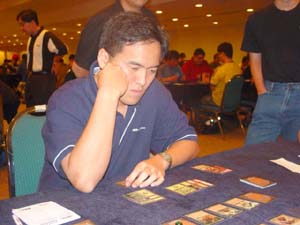 At 6-1 after the first day Khoo finds himself on tale #1 in the first pod , nestled neatly between Chang Chau from Singapore and Former Australian National champion Rob Nadebaum.

Khoo opens with a Wirewood Savage, setting himself for a probable R/G draft but keeps his options open following with a Vitality Charm and a Spitting Gourna. Amazingly, the oft drafted red trickles through in the middle of the first pack as Charging Slateback, Pinpoint Avalanche and a very late Threaten come his way, signaling viability in these colors. However, Nadebaum to his right, although in blue has been pushed to red, taking a Menacing Ogre and two Battering Craghorns. Late in the pack Khoo managed to find a Tempting Wurm, a Taunting Elf and a game breaking Wave of Indifference.

Picking up a second Spitting Gourna, Khoo passes Infest, Crown of Suspicion and Charging Slateback on to his right. To his left Chau finds a Sparksmith to strong to resist heading into red and picks up Slice and Dice and a Skirk Commando for his R/W. Khoo is still able to grab a Blistering Firecat, Skirk Commando, Skittish Valesk, a second Wave of Indifference & an Erratic Explosion, showing why red is drafted above all other colors. Late in the pack there is little as the quality red and green quickly dry up. All that remains is the tribal minded Thunder of Hooves, AEther Charge and Leery Fogbeast.

Akroma, Angel of Wrath stares faces Khoo in his Legions pack and after a short think he throws away his pick cutting it – he can't win if that hits the table. He follows with a Brontotherium and an Elvish Soultiller from Nadebaum. With Nadebaum now in red he is surprised to get a 5th pick Frenetic Raptor, but takes it none the less. His deck is looking rather heavy at this point, with Gempalm Strider and Warbreak Trumpeter being taken to round out the deck.

"Hopefully this is a 2-1 deck" Khoo adds, and with such a high curve and both Waves of Indifference in his main deck, he is probably warranted in his assumption.