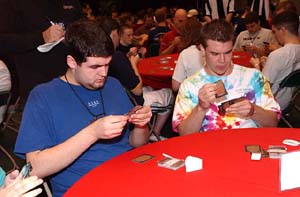 Last night, after seeing that they might be at the same pod, Billy Jensen and Brian Kibler discussed their preferences in Odyssey-Torment-Judgment, and the discussion paid off 'I know Billy likes to draft white' said Kibler, sitting behind Jensen in the pod 'So I guess that means I'm going for green'

Kibler opened a bomb of a booster, with Overrun, Mystic Enforcer and Psychatog, taking the Overrun in light of Billy's likelihood of going white, while Jensen agonized over his pick, eventually settling on Ember Beast over Flame Burst and Ivy Elemental. He'd stated before the draft that he didn't want to draft green, and this pick backed this claim. Jensen then took Embolden over Aven Fisher with his second pick, while the Elemental went into Kibler's deck.

Brian's next pick was a tough one, with the Georgia resident choosing Bearscape over Muscle Burst and Balshan Griffin, while Jensen took Shelter. The next few picks saw Kibler deepen his green while delving into black for Sadistic Hypnotist and Gravedigger, also getting a 10th pick Seton's Desire, while Jensen took Pardic Firecat, Beloved Chaplan, Syncopate, Dogged Hunter and an amazing 8th pick Dreamwinder.

Jensen opened his second pack and was immediately faced with a dilemma. Definitely white, Bill had to decide between his red and blue splashes, with Hydromorph Gull and Fiery Temper offering up the temptation. He finally picked the Temper, and with Kibler taking first and second pick Cabal Torturers, could only mutter 'I'm a very good Magic player' as he found a second pick Violent Eruption. His third pick Fiery Temper must have felt pretty good too, but not quite as good as Kibler's fourth pick Faceless Butcher, an absolute bomb when coupled with the Malevolent Awakening he'd gotten late in the first pack. Brian eventually grabbed a Pardic Collaborator for the splash and a Far Wanderings to help that cause, but the rest of the pick was kinder to Jensen, who got Sonic Seizure, Temporary Insanity and a couple of Mystic Familiars he hoped to enchant with Arcane Teachings.

Unfortunately, that opportunity never came. While Brian was opening and passing one for Giant Warthog, Jensen made up for the lack of the enchantment with Fledgling Dragon, following that up with Vigilant Sentry, Shieldmage Advocate and Valor. Kibler's slow deck slowed even more with Sudden Strength being joined by a second Giant Warthog.before he increased the tempo a bit with two Nantuko Tracers and Toxic Stench, while Jensen, left with no picks for his own deck, hate drafted Wormtongue Drake and Anurid Swarmsnapper before two Lava Darts and benevolent Bodyguard finished out the deck.

In the end both players went 2-1, with Jensen losing to Mike Long, the table's eventual 3-0